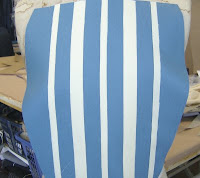 One thing that we have been trying to get ahead on is a striped jacket. The problem is that it is impossible to get the kind of striped fabric the designer was after so that means making stripes. We did some samples of striping with twill tape which comes in various widths, so the designer could play with the patterning on the fabric. The other thing we did was make stripes out of a cream wool- of course, the edges of straight grain strips need to be turned or finished somehow, so the twill tape was winning as a technique. After sourcing some
1 1/4" dyeable cotton twill to go along with the 1/2" and 3/4" twill in stock, I was set to give it to the dye room, and the designer changed his mind.
O.K. This show techs at the end of the month. I haven't been able to have a fitting in real fabric yet because I've been trying to get the striping decisions, and just when we were so close.....
So, we're going with the wool. Period. I hope.
I'm not even going to get into the discussions that happened today when 4 different tailors in two different cities are trying to make uniforms that look the same. Or how I was feeling when the tuxedo I have to make for one guy might not be needed but no-one is sure yet about that scene. Or the fittings yesterday that kept getting postponed for an hour at a time until finally one was cancelled.
Tomorrow will be better. I'm sure.
I hope the buyers pick up that bolt of "Wonder Under" tomorrow so we can stripe on!
Posted by Terri at 7:55 PM