What have I been up to?

What have I been up to? A lot of little projects it seems.

After delivering their long program costume, I watched Weaver and Poje's Skate Canada performance last week-end.
I was so nervous! I am accustomed to seeing costumes I have made before the public does- and any small tweaks can be made at a dress rehearsal. Not with these! I was glued to the television, looking for problems, checking that everything worked and looked OK. I did see a couple of things that needed work so they came back to me and I have tweaked them a bit more.
I do have to say that I thought they looked great, and I am very critical of my own work. They also had two personal best skates and won second place right behind Virtue and Moir (the reigning Olympic champs in ice dance).
I think they have momentum and will accomplish great things in Sochi!

Next,
I don't usually take on private clients but occasionally I do - usually when other work is in limbo or hard to come by so, I drafted a new shirt for a old client, did some alterations on a few expensive off the rack jackets for another person, and may have a commission for a suit coming up.

The other thing that has been taking up my spare time lately is putting together a photographic instructional booklet for tailoring. The idea began while I was teaching and morphed a bit over the years from a text document that would be accompanied by samples to something more visual. I have worked on in fits and starts over the years, but always was pulled away by other work.
In our work context, we spend time making samples as we change and improve and invent methods. We may be asked to do something unusual or we have come up with a way of dealing with a common technique that is more efficient. We generally make some written notes to go along with the samples, and keep them in a box at work. They can be reviewed for years this way. They have been invaluable tools for training on the job when we have a new seamster, or just to refresh the memory when dealing with little used techniques. A couple of years ago Silvia made up a booklet of photos documenting  the process of building fall front breeches, which was very nice for us to have and refer to.
Silvia's photo booklet, combined with the lack of instruction available online or in person, has led me to revive my old instructions and combine them with detailed photos in order to eventually have a pdf booklet of some of the tailoring techniques we use. 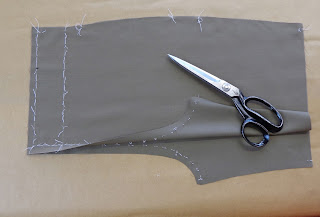 My photography skills are being put to the test! Sometimes I yearn for the days of film and a Pentax K1000.
So I am plugging away at it, hoping to get at least sections of it done.

For now, that seems to be what is going on.