Both ends of the size spectrum 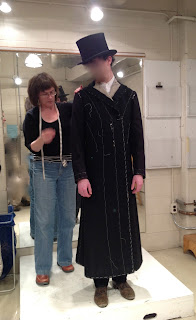 Last week I was able to get a couple of fittings on the Bekishe coats that we are making.
These are traditional long coats traditionally worn at weddings.
The designer wanted very soft construction and not necessarily a perfect fit, so these will get some breakdown later. They have only a single layer of hymo for support, no shoulder padding and they will only get a half lining to keep everything soft.
I was happy that they worked out so well. though one could argue perhaps too well, since the fit was pretty spot on.

We have four of these Bekishe and two of the Kapoteh to make in sizes from 36" chest to a 52" chest.

When I am cutting multiples, I prefer to have one prototype fitting to see if I have interpreted the style to the designer's satisfaction. Unfortunately, we didn't have that opportunity, so I was cutting right into fabric hoping that both the fit and the style were OK.

I don't grade my patterns up or down to get the different sizes. I just draft each of them as I go. Grading isn't a skill that I really have- I understand the premise but I really don't have practical experience with it. I tend to draft one pattern in which I work out the proportions I think I will use on the other sizes, ( the amount of waist suppression, the size of the panels at the waist, overall length, the amount of flare in the skirt) make notes and then draft each one separately. Drafting new takes less time than trying to teach myself a new skill set that may or may not be the best choice in the situation. 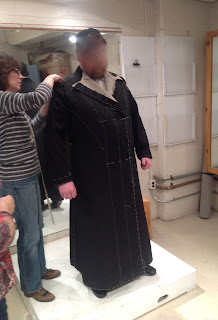 In the top photo, I am dealing with the smaller end of the size range and the bottom photo shows the larger.
The gentleman in the top photo I had never seen before, I just got his numbers and a photo to work from so I felt very gratified to have such a good fit.
In the bottom photo is someone I have made for before, but hadn't done anything like this for him.
(you know, I keep certain patterns but honestly I rarely get them out and use them again, not that an eighteenth century coat pattern would have made life any easier)

The challenge for me was to try to quantify my draft in a larger size.
Most drafting systems are based on a 5'8"tall man with a 36" or 38" chest and as you draft for sizes past about a 44" chest, the formula starts to go wonky. Things like the depth of the armhole and the width of the back neck.
That's when I think it comes in handy to be willing to adapt and adopt bits and pieces of knowledge as you go. It also helps to have a lot of experience, to lessen the worry when cutting right into the fabric.

I do wish I had more time to analyse things like this while at work, but for now I just try to scribble notes on the pattern as I go and hope that at some future time I can go back and look at it, and it will make sense.

Tomorrow I have one more to cut out in fabric, and the linings and bits of the three I fit this week to cut so they can be finished.
Then I can start my patterns for the next show. Onwards! 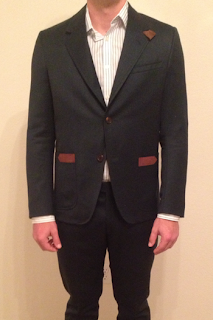 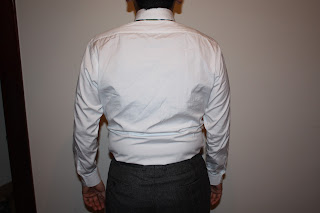