I meant to get last weeks table posted on the week-end but life ended up getting a bit hectic so this week you get another two for one special!
Last week: 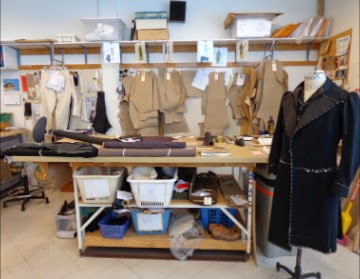 a view from my side 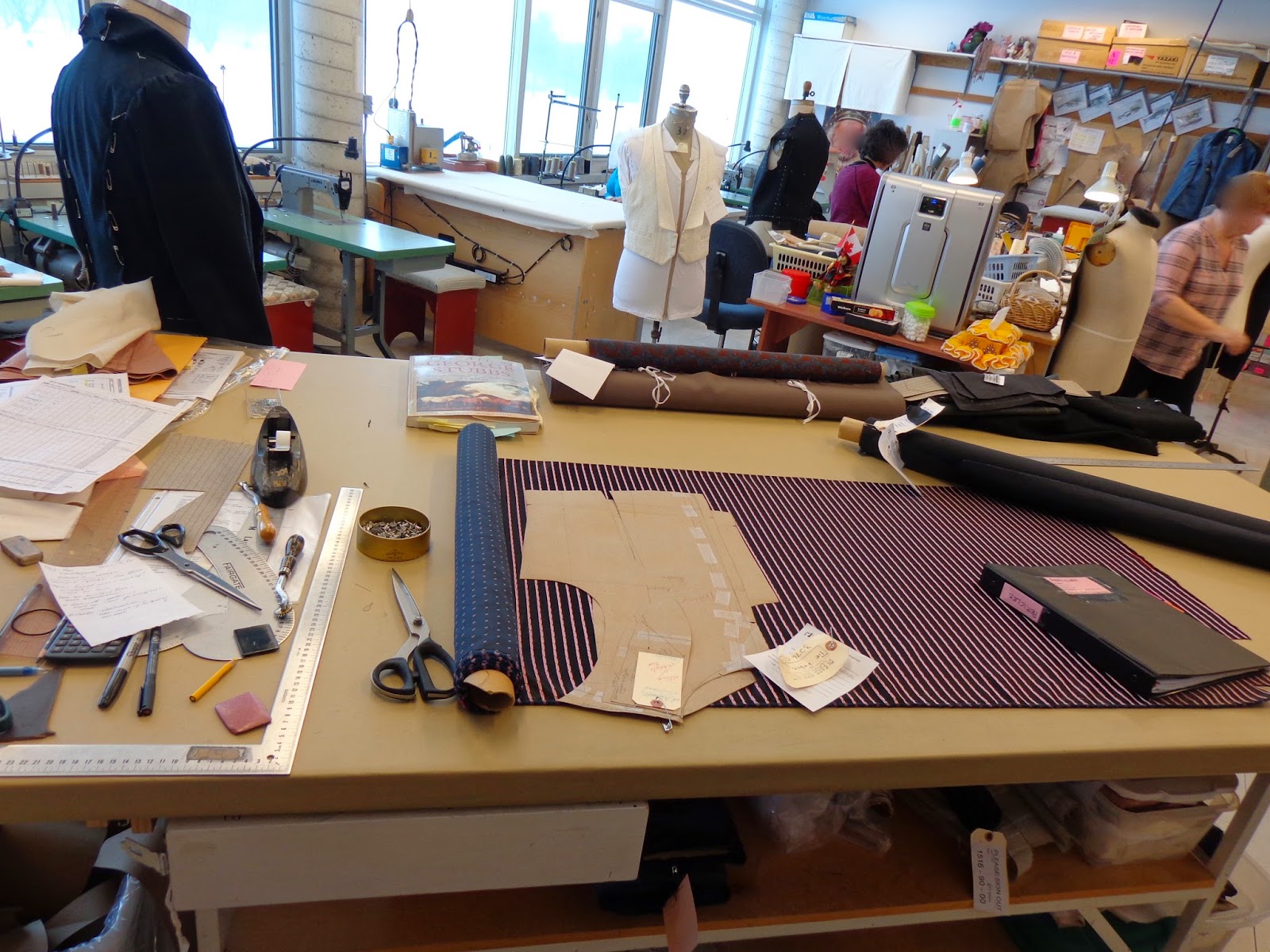 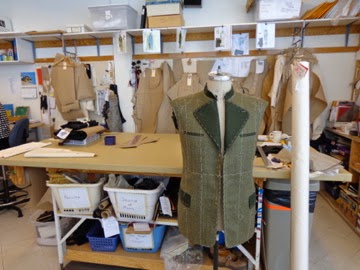 I had a technical fitting with this jacket, so we were able to move forward. The technical issue was the amount of shoulder padding needed to achieve the shoulder line that the designer was after. I didn't have quite the right profile in the first try so I needed to make sure my alterations were correct before moving on. Today I cut the sleeves so it can be finished. Yay!
Here's a little detail SA stitched at the top of the back pleat. 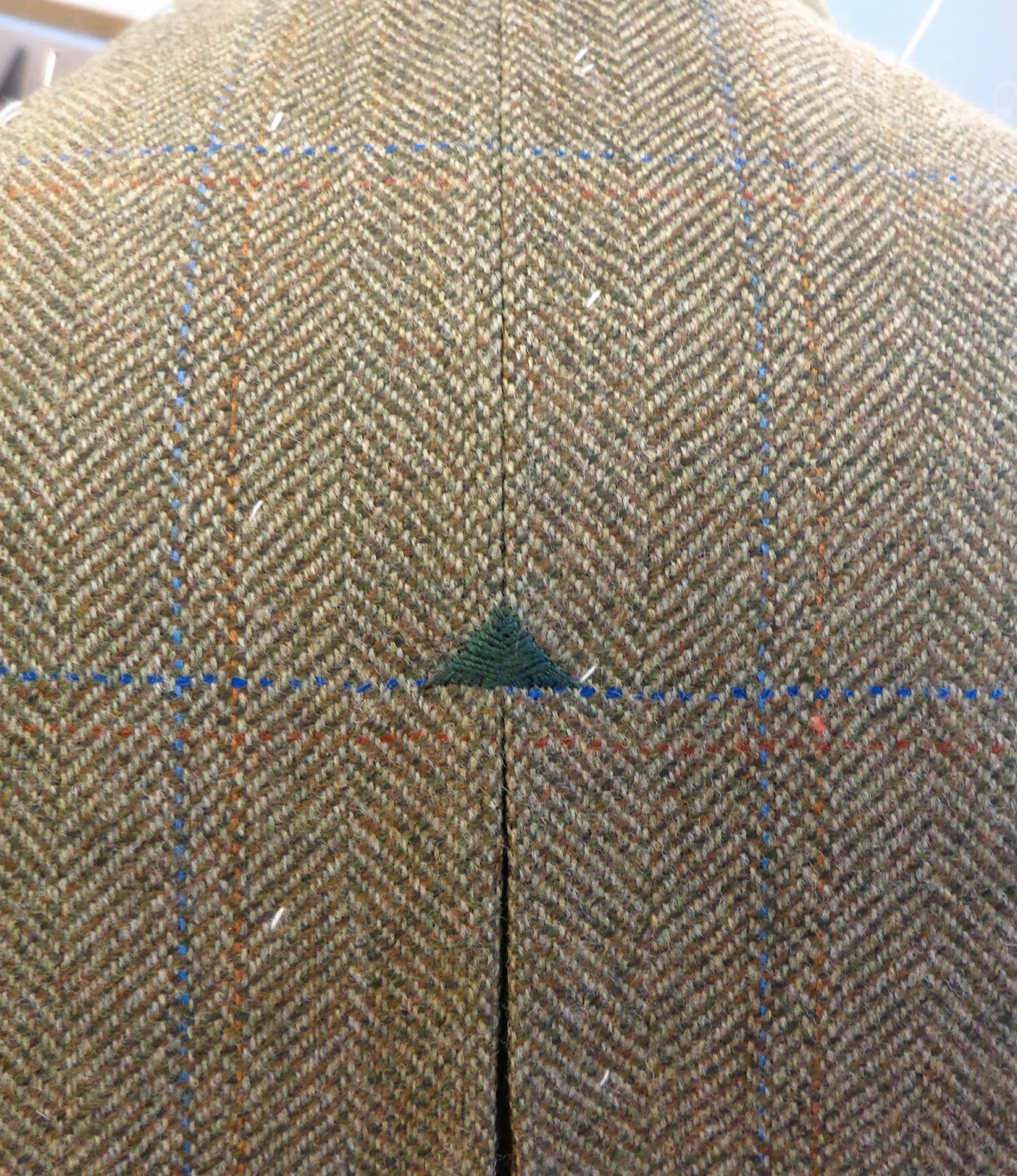 The frock coat mock-up in last week's photo is cut in real fabric and bundled up on my table. The waistcoat that I was about to cut out in last week's photo is almost put together, and I have also managed to draft up and cut in toile one of the 18c costumes- breeches waistcoat and coat and got another 18th c coat toile cut out and stitched up, and am awaiting fittings at the end of this week. I have SW working on the trousers for the tailcoat she put together, KM on the military frock coat, SA and DB on the modern suits. One more stitcher to arrive on Monday so we will be pushing ahead and making lots of progress.
I have lots of pattern alterations to do on the rest of my 1840's costumes as I had all my toile fittings as of Friday. I am still waiting for fabric on a few costumes yet, but I think we are making progress.

week 5 with a waistcoat fitting 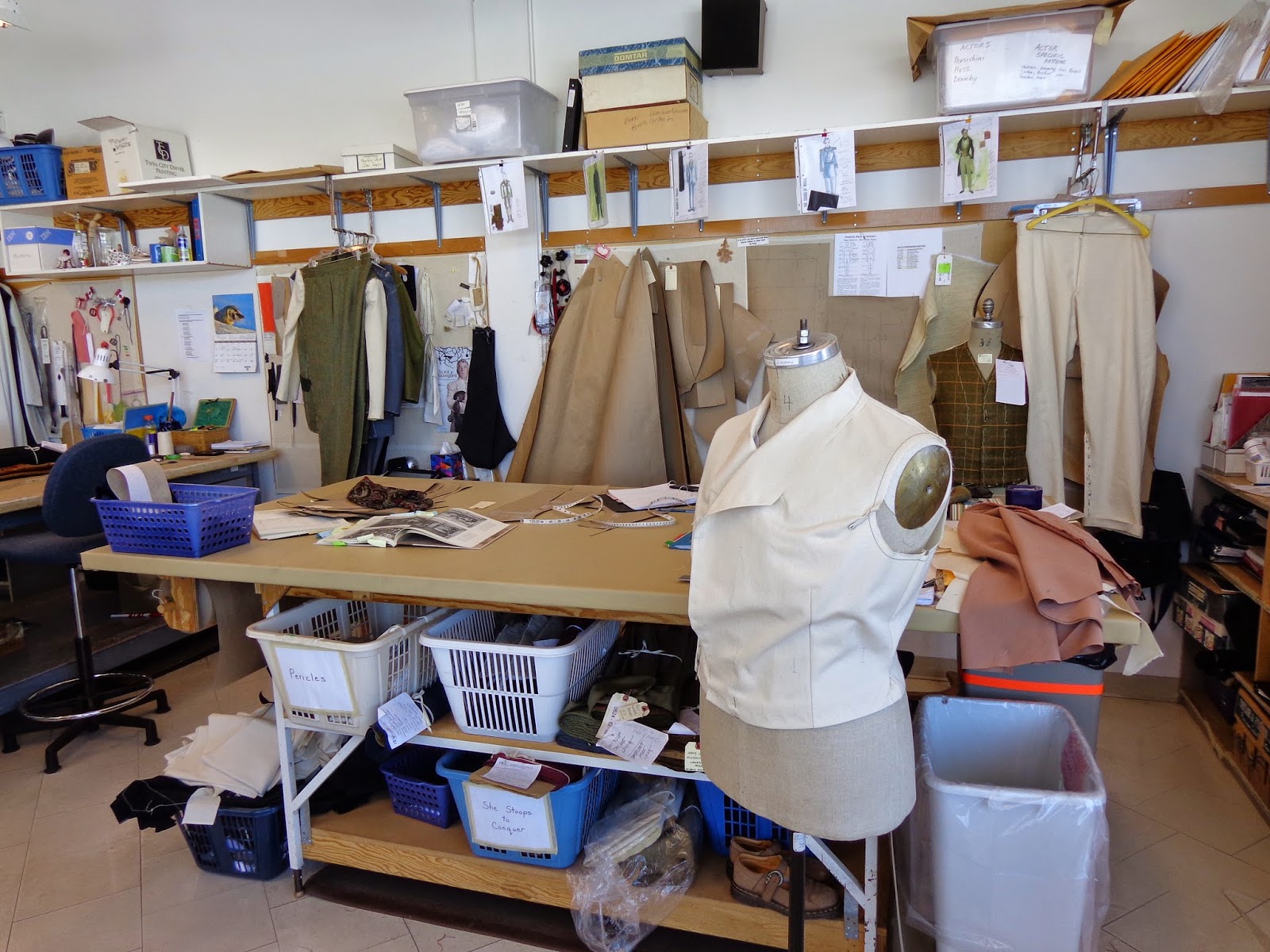 Table- taken at a random random time during week five.
Well, it is getting busier! was surprised to get two major fittings on the first day of rehearsal as  that day is usually eaten up with meetings and a read through of the play.
Those costumes are hanging on the left of the picture. I fit two suits on our leading man- he came in a bit smaller than the last measurements I had. It is better that the costume is too big rather than too small, but, it does mean a bit of extra figuring out time.
I confess that cutting right into fabric is not my favourite thing to do, it certainly doesn't save time or money. It is much more efficient to cut a quick mock-up or toile- especially when you are not sure of the details of the design or the measurements of the actor.
The toile in the foreground is a waistcoat for an actor I have never had to build for up to now. Well, I lie, I made him a shendyt last year, but now I have to put him into some nice early Victorian clothing.
So I made a toile mostly because I thought he would be a challenging fit. He has a 45+ chest and a 34.5 waist and a 47.5 inch hip. Actually, the chest measure was incorrect, as I found out in the fitting. He really is 47 inch chest, so making a toile was a great idea, as I had to make more changes to the pattern than usual.
When I put the toile on him, I could easily do it up at the CF waist. right on my drafted CF line. As I pinned it closed in the front I could see that it would not be lining up on my line, the further up I pinned. So I just pinned it where it wanted to sit, and had a look at what was going on. 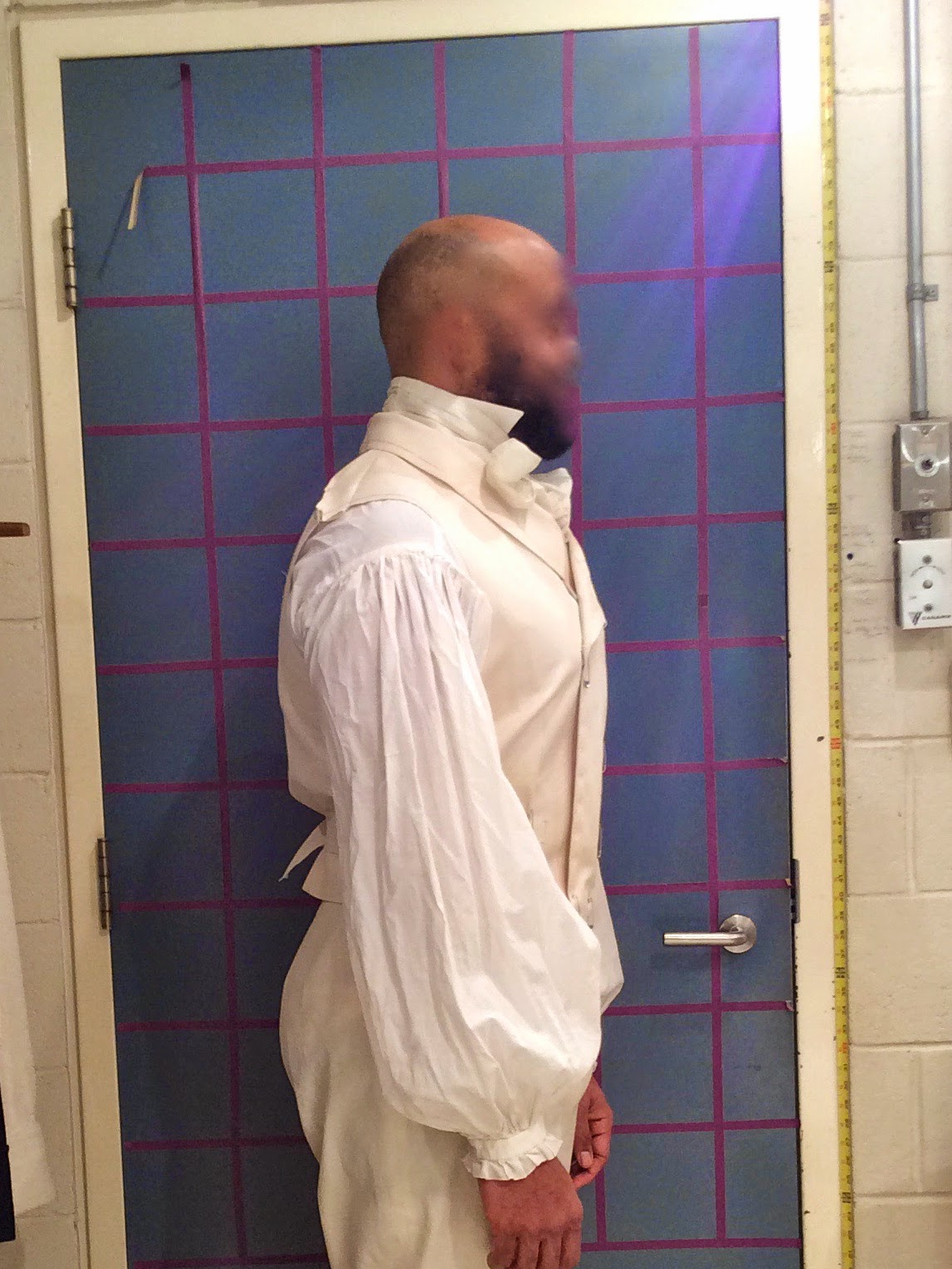 This is the fitting photo, in profile and you can see that he has a very prominent chest. Please note the drag lines from the full part of the chest towards the side waist. This was the second big hint to remeasure his chest. This is a really good example of why it matters where the fabric is distributed around the chest, and especially where you make the waist suppression. I need to make sure that the waist suppression happens where he needs it which is directly underneath the fullest part of the chest. Now in this case, I would end up with a very large front dart, so I will split that dart up and rotate it elsewhere, likely a little into the armhole (which will be eased in) as well as through the neckline dart which will be hidden by the lapel of the waistcoat.
If I released the side seam and let the front hang there, I could pin out a larger dart pointing to the chest and then if I re pinned the side seam where it lay, it would have swung downwards and towards the front, adding the amount taken in the dart fabric back at the sides.

This is a good example on why you cannot make the waist fit better just by taking in the side seams.
You will see this on Internet gentlemen who keep trying to get rid of fabric at the waist of their shirts. Usually these drag lines appear in the back, where a dart would better serve the purpose, but on a gent with a very full chest, taking in the sides aggressively will give you this look too.

That is it for now, I must get outside and contend with the snow which seems to be relentlessly falling! I cleared three inches from the sidewalks and drive this morning already, but more has fallen. The good news is that it is great for cross country skiing. I can walk out the door, put the skis on and go, which I did already today! 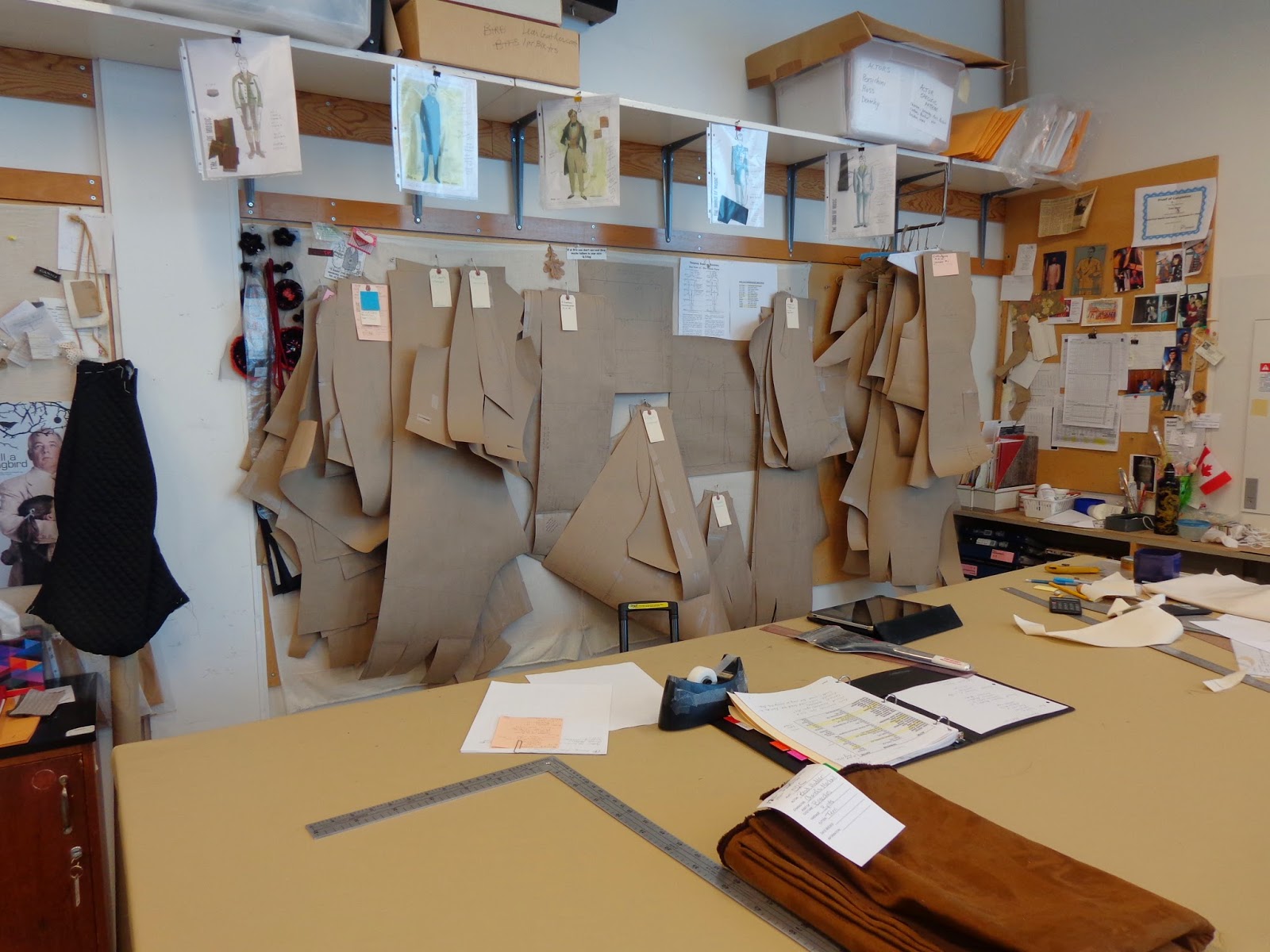 Week 4! How does the time go by so quickly? As you can see, I have made quite a few patterns already- I have all the patterns done for the musical, and in fact this week I finished making all the patterns for the early Victorian show and also cut toiles for them.
One of our musicals starts rehearsal on Monday and that means the actors are in house and available for fittings! Yay!
I will have three tailors to keep gainfully employed next week, and four the next, so bring on the fittings.
Now I am onto my eighteenth century show and will try to get a lot of those patterns done before it gets too crazy around here.
One issue that I am struggling with is that some of the measurements are quite outdated, and/or seem off, or photos are missing or just bad. I think if an actor haven't been measured in four years, it is time for an update.
Things I hate to hear: oh, you know Mr.X - he never changes size-

I am a stickler for taking accurate measurements. I cannot stress it enough. The measurement that seems to be most often off is the chest measurement- it is easy to let the tape sag or drop slightly and poof! an inch or more is gone. I experienced that today when the actor  I tried a mock-up waistcoat on had a 47 inch chest not a 45 3/4 inch chest. Good thing I didn't cut right into the expensive fabric.

The trick is to be careful and consistent and use a waist tape- we have 1" wide fitting belts made out of webbing with a hook and bars at one inch increments that we put on the actor's waist. This stays in place and gives a defined place to take measurements to and from. It also stays in place for the photos we take. Regarding the photos, it is not useful for the person to be wearing an oversize untucked shirt over baggy jeans for these photos.
It makes me wonder what people are thinking the photos are for if you can't see anything!

I recommend giving the actor a white t shirt in a size smaller than they would normally wear, so you can see the outlines of their shape. White t shirt, dark fitting belt, photo in front of a contrast wall or door.
Ok that is the end of my mini rant, and I will be able to show you some works in progress next week.
Posted by Terri at 11:44 PM 4 comments: