Counting the weeks:14 and 15 with an overcoat update 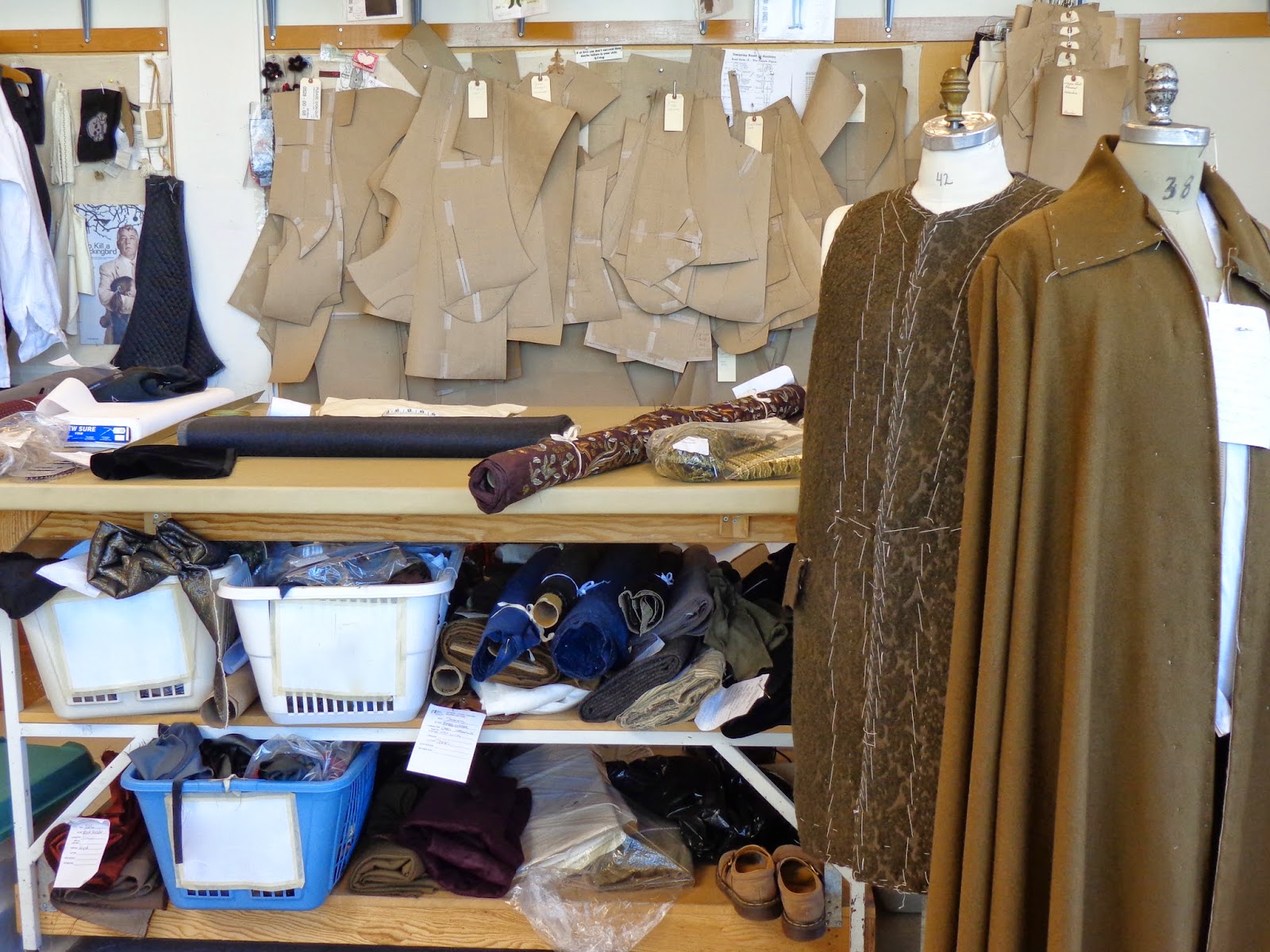 It was getting kind of crazy around the work table over the last two weeks. I put in many more hours than I would have liked to, but the work has a deadline and we do strive to make it work! 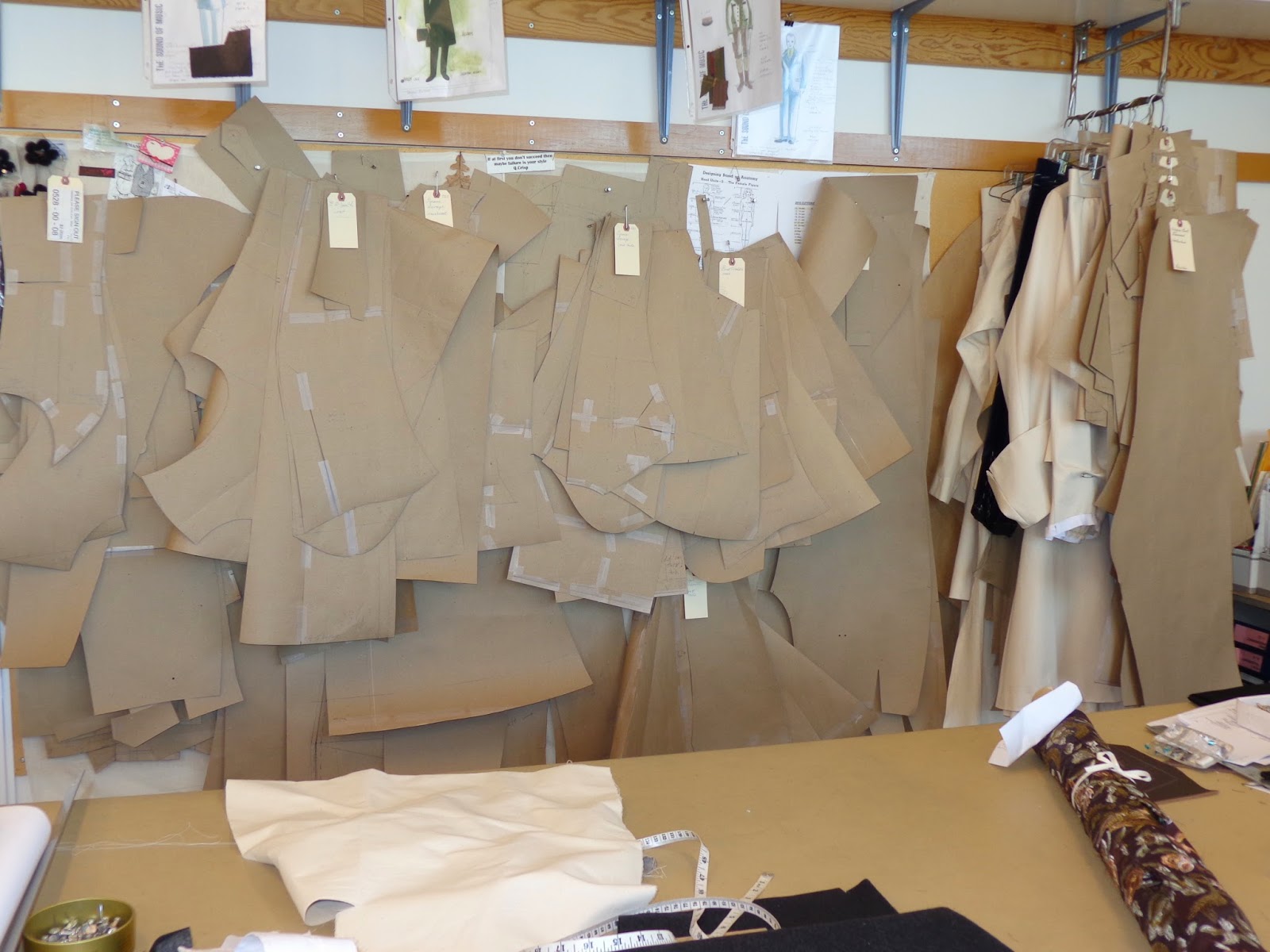 I included a shot of the wall behind my table just to give an indication of how many patterns I have churned out in the past 14 weeks. I don't make separate patterns for linings or facings so these are just the basic pattern pieces.
For the 18th century show, I have to cover the builds and stock costumes for 8 different actors. I have 5 skirted frock coats, 6 pairs of breeches, 5 waistcoats, one shirt, 2 capes, one sleeved casaque style cape, and cut, make and finish 9 stocks/cravats. Repair and or renovate three coats, 3 pairs of breeches, 3 shirts, 2 new waist coat backs on old waistcoat fronts, reline a old cape and sundry other things like changing buttons, repairing linings, adding pockets...... washing and ironing 5 new shirts.....it does go on!
Anyway, it adds up in the pattern drafting department! 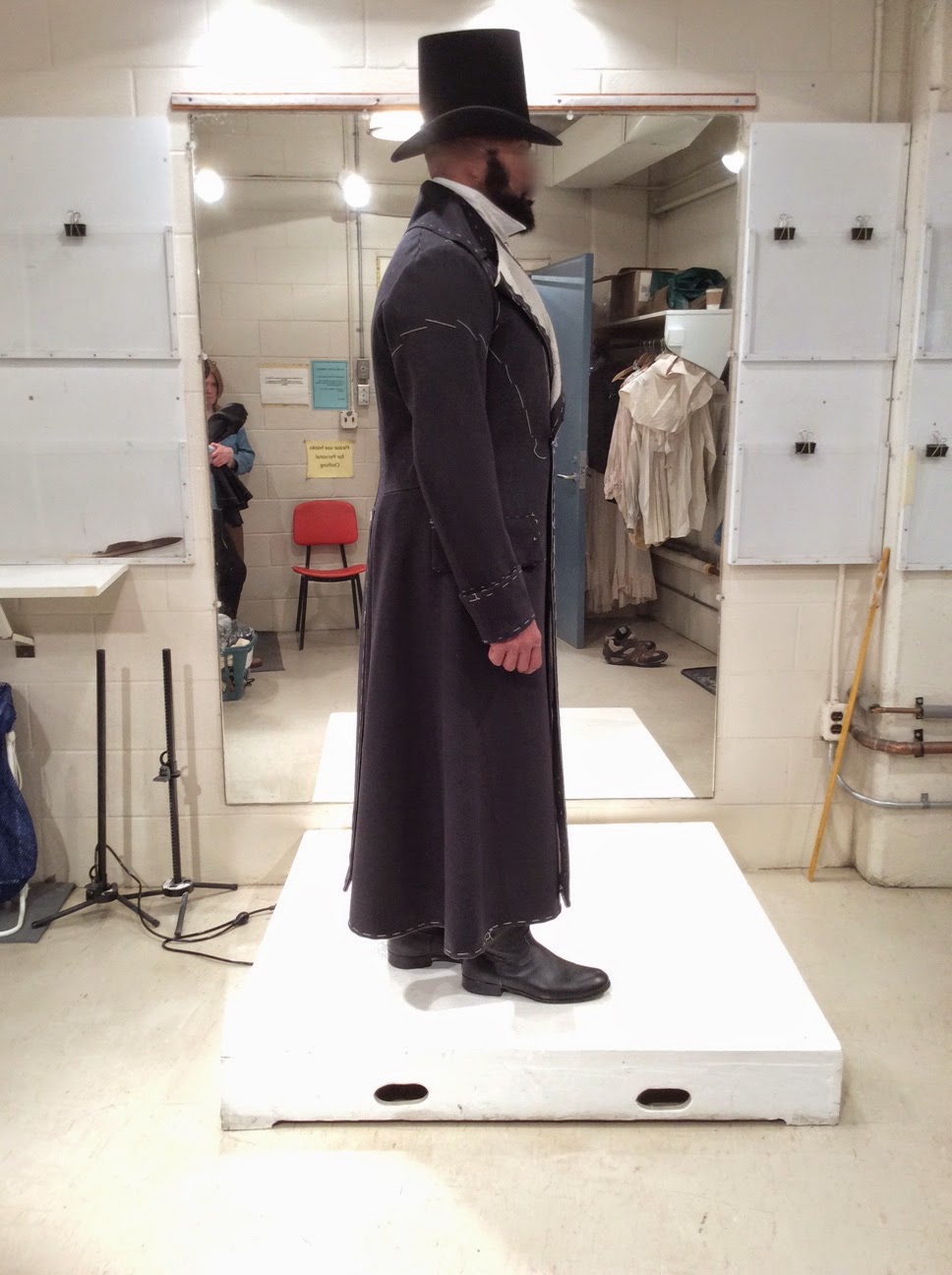 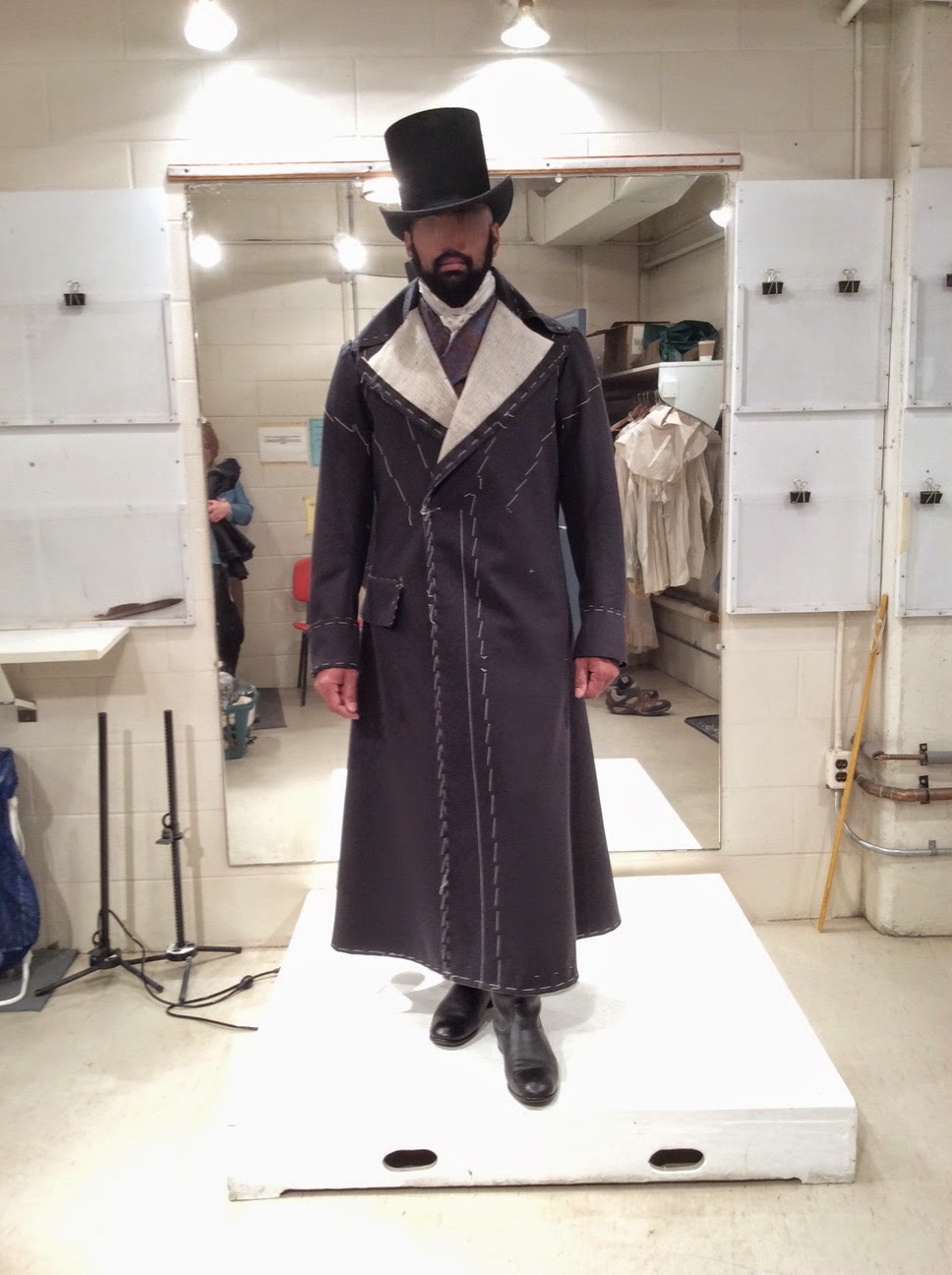 Here is an overcoat update. I documented the toile version of it here along with the waistcoat, which has turned out quite nicely. The coat is going to get a removable capelet, and I still need to tweak the set of the sleeves but it is turning out very well- We have also constructed it slightly differently than usual, and I will get some more photos detailing how it was made this week.

That's it for today.
I have to switch gears and get a pattern for a 1970's "ish" suit drafted up and to be honest I need a day to wrap my head around the change from 1760 to 1970! Maybe I will do that on Saturday when I will have fewer distractions at work.
Posted by Terri at 10:23 PM 6 comments: 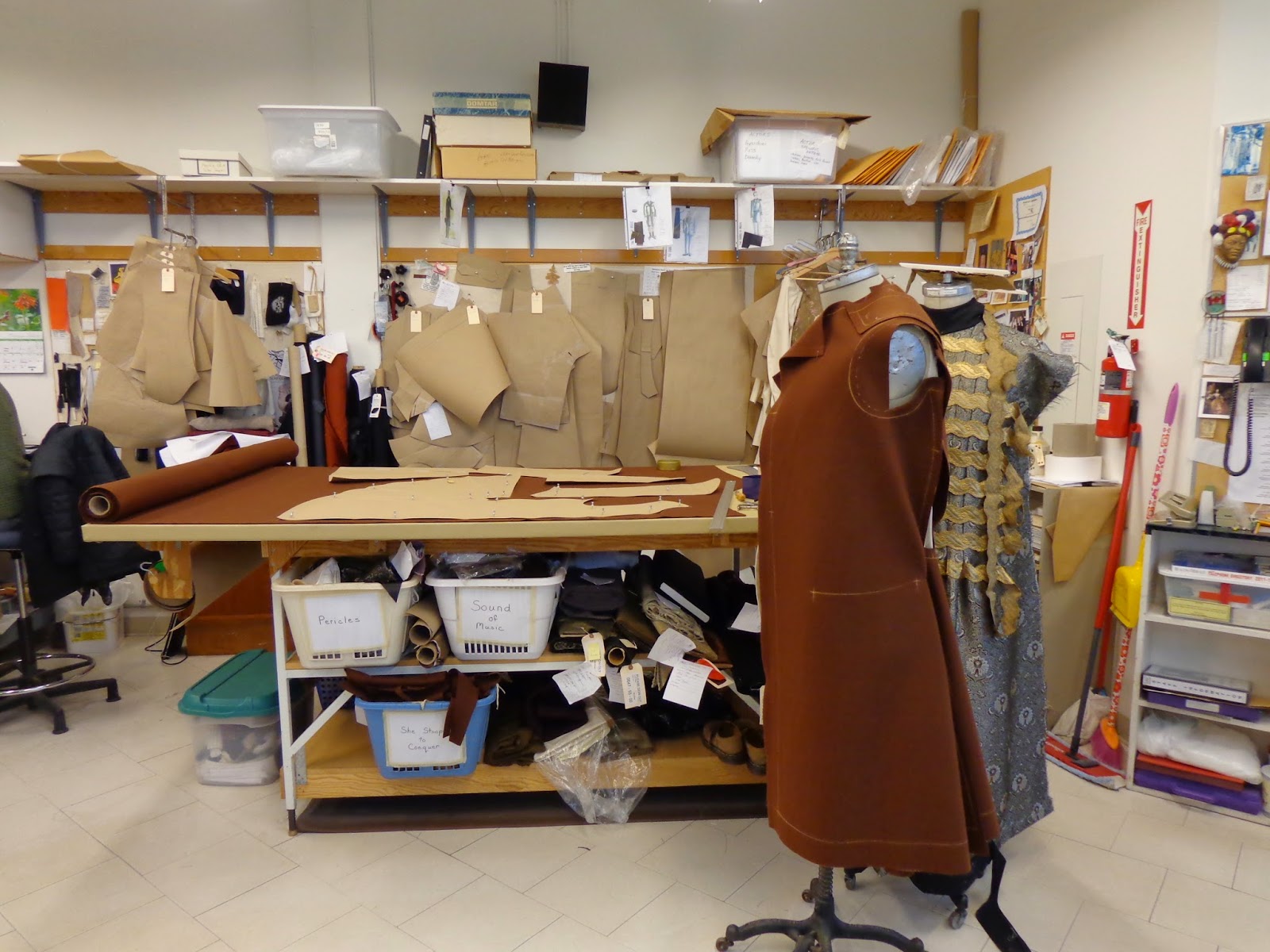 The weeks are starting to feel as though they are running together!

We made it to our first deadline easily, which for the first show, is the quick change rehearsal.

We were able to get our actors changed from one costume to the next in a matter of 90 seconds at the rehearsal, and it usually gets faster as the season progresses. Yay!

Sometimes though, at QC rehearsal, it can feel like bedlam backstage- especially when you have many actors changing at the same time. I have seen traffic jams of chorus girls, who all entered a dressing room to change, only to get stuck getting out because their costumes and headdresses took up so much room.

So it takes two people four hours to get through the rack check. Then there is always the list of what is missing and when it will be ready and after all is accounted for, we get to watch our work onstage at the tech dress rehearsal. This is the first time the actors will run their show with all the technical elements together, so there is a lot going on. 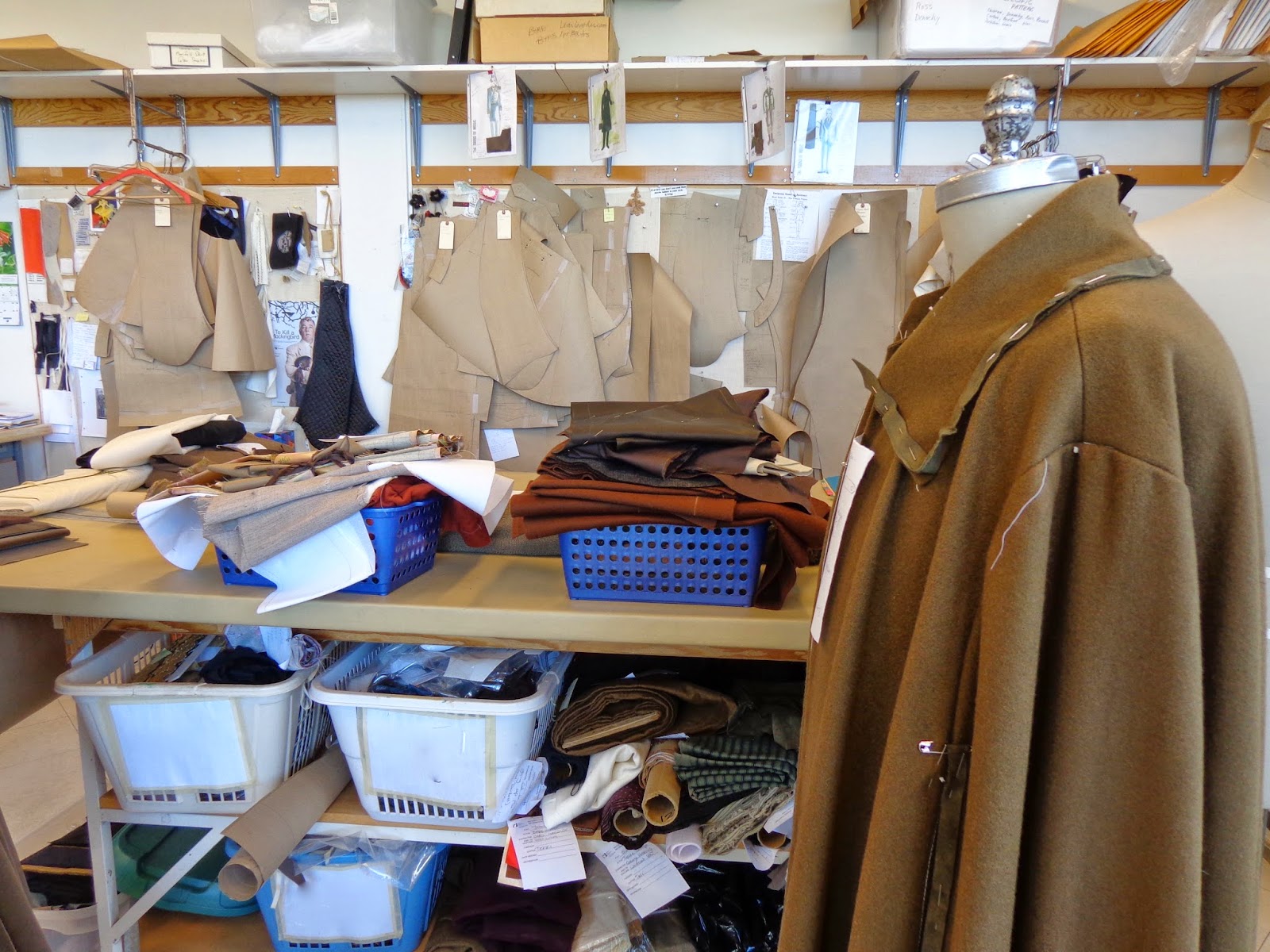 Back to the table though. I have a new show to discuss with a designer on Tuesday and although we are in pretty good shape with the next show up, I feel very behind for the third show. That is our 18 century show, and you can see that I am cutting one of the coats in the top photo and after a long day yesterday with the tech dress, I was in this morning cutting another coat out for that show, and piling up the work in baskets on my table.
I like to feel that I am ahead, but it worries me when costumes sit there in pieces for more than a day or so.
Monday then, I think we will make a group effort to get at least one of these put together and that will give me a sense of relief.

Week 12 at the cutting table 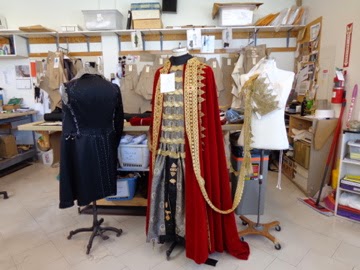 Week 12 at the cutting table, and I am trying to get the last few pieces figured out, and hopefully into someones hands pretty soon.
I have fittings from 6 weeks ago from the third show I have to work on, that I have not had time to deal with, and the sooner I can get back to those the better work will progress.

So one of the last costumes that needs extensive figuring out is this one with the red cape.
Luckily the design assistant found a cape in stock that fit the design quite well, so all we have to do is trim it up! Well that sounds easy, but putting trim on a finished velvet garment means lots of hand sewing.
You might think that it would be faster to machine it, but if you have ever sewn velvet, especially sewn velvet to a non velvet, you might end up on the floor in tears if you tried to machine it.
By the time you unpicked the lining and made it possible to get to at the machine, then fought to keep it from looking like a dogs breakfast when finished- and the trim would have to be basted in place anyway, you might as well save the drama and stitch it on by hand.

The trim is wide and it travels around the back neck so there will be some careful manipulation and cutting of that trim to make it work.
The bijoux department will also be adding jewels to the trim, so it has to be placed symmetrically on the right and left sides.

The garment underneath is basted together so we can get an idea of the spacing of the gold trim it needs.
So I have pinned it out and send off a photo to our designer, and well, I found out that it needs to be set closer together.
I still need a black fabric for the centre front detail, and this black will go around the hem with more gold trim on the edge and more inset jewels.
There is a lot left to figure out, but it seems in hand, well on Thursday it still felt in hand, but we will see what Monday brings.