Layers and things that are hardly seen

I was looking through some of the work photos I have taken this year, and it struck me that some things which we make just kind of get lost in the final look. I know they are there, but overall they seem a bit lost to an audience. I like to think they would be missed if they weren't there. :)
Actually I know that is true!

so here are a few shots to illustrate.... 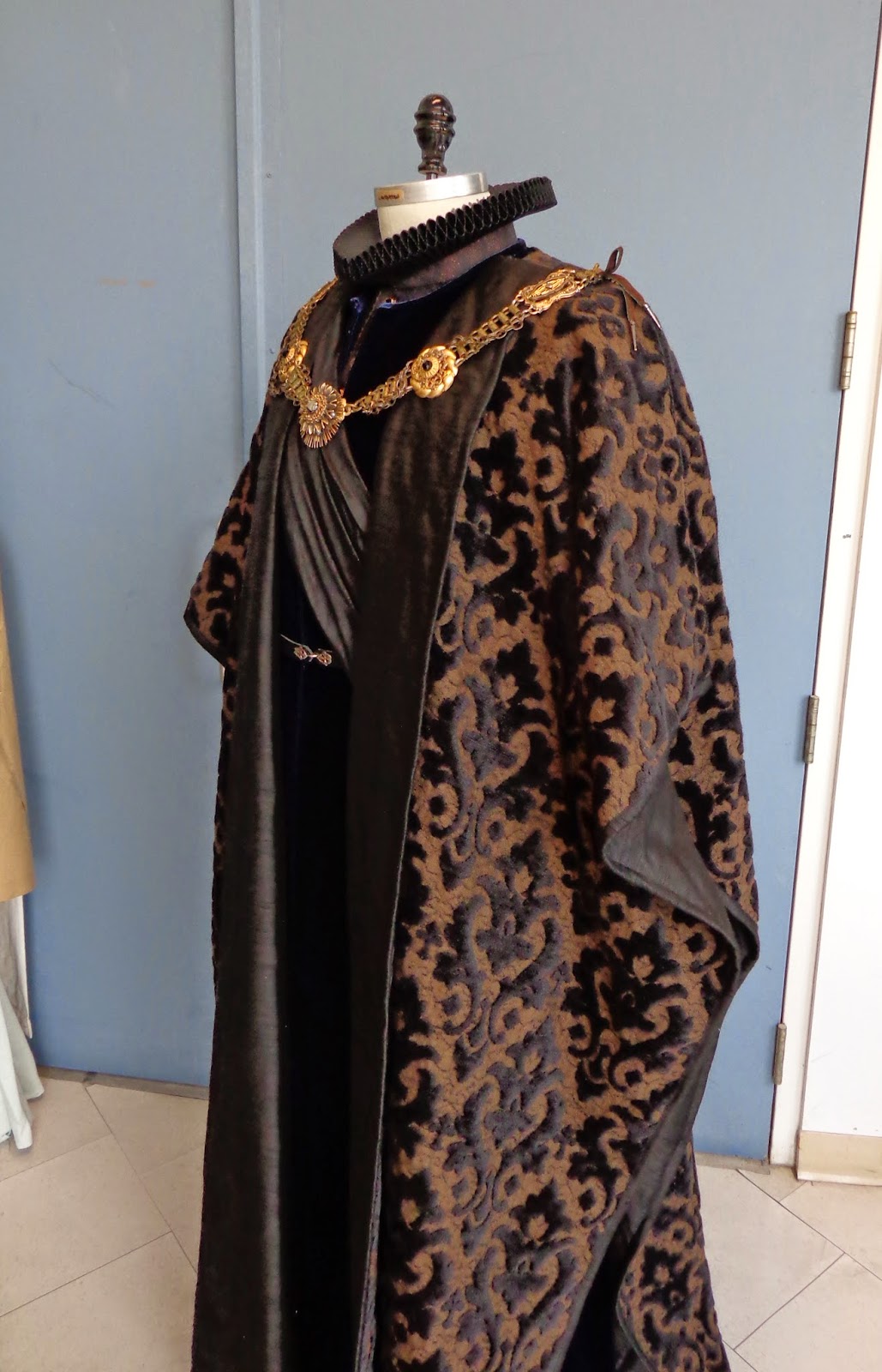 Here's the final look, but what is under that big square cut robe and chain of office? 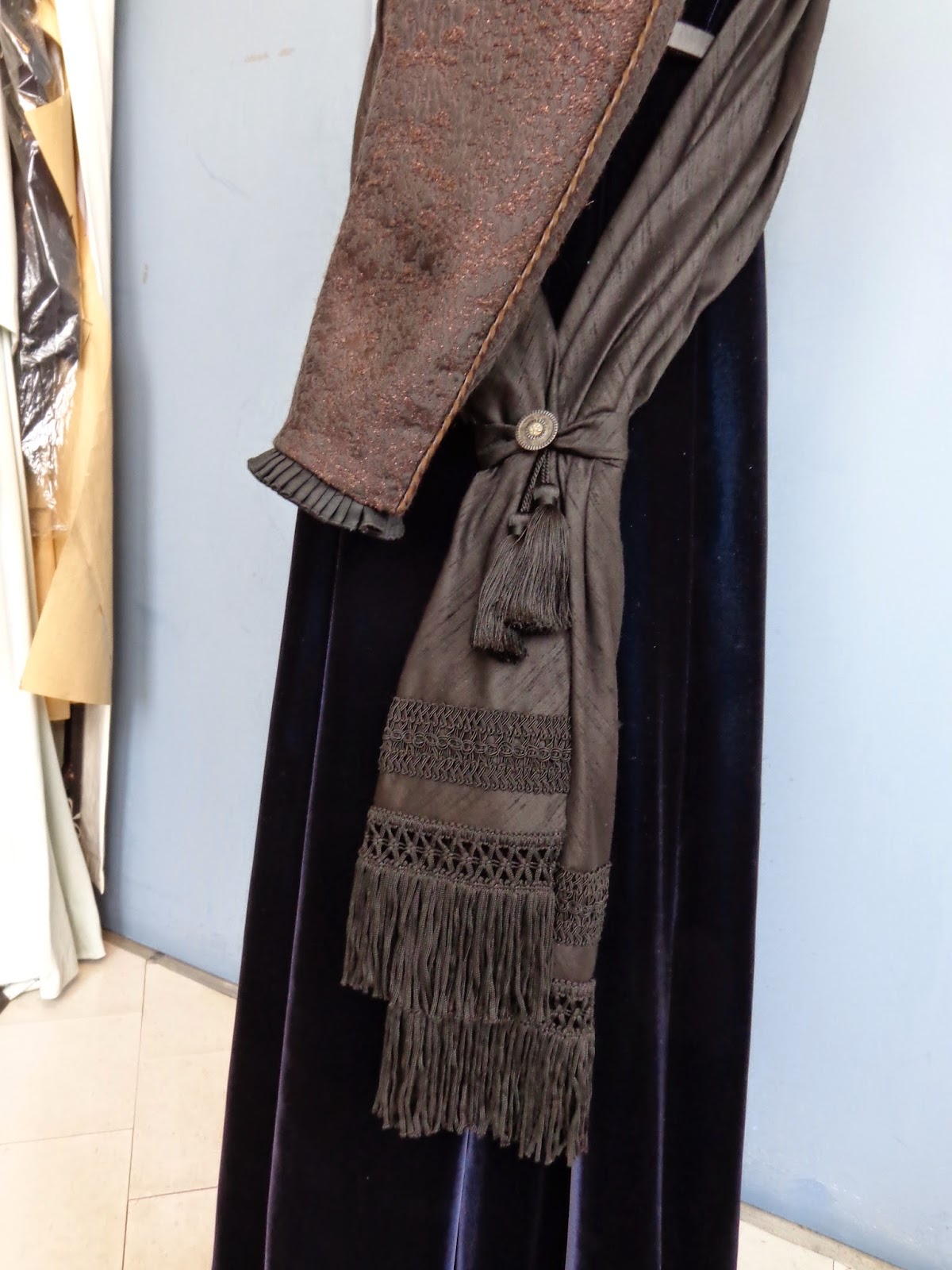 A silk sash, with a nice fringe and trim detail. 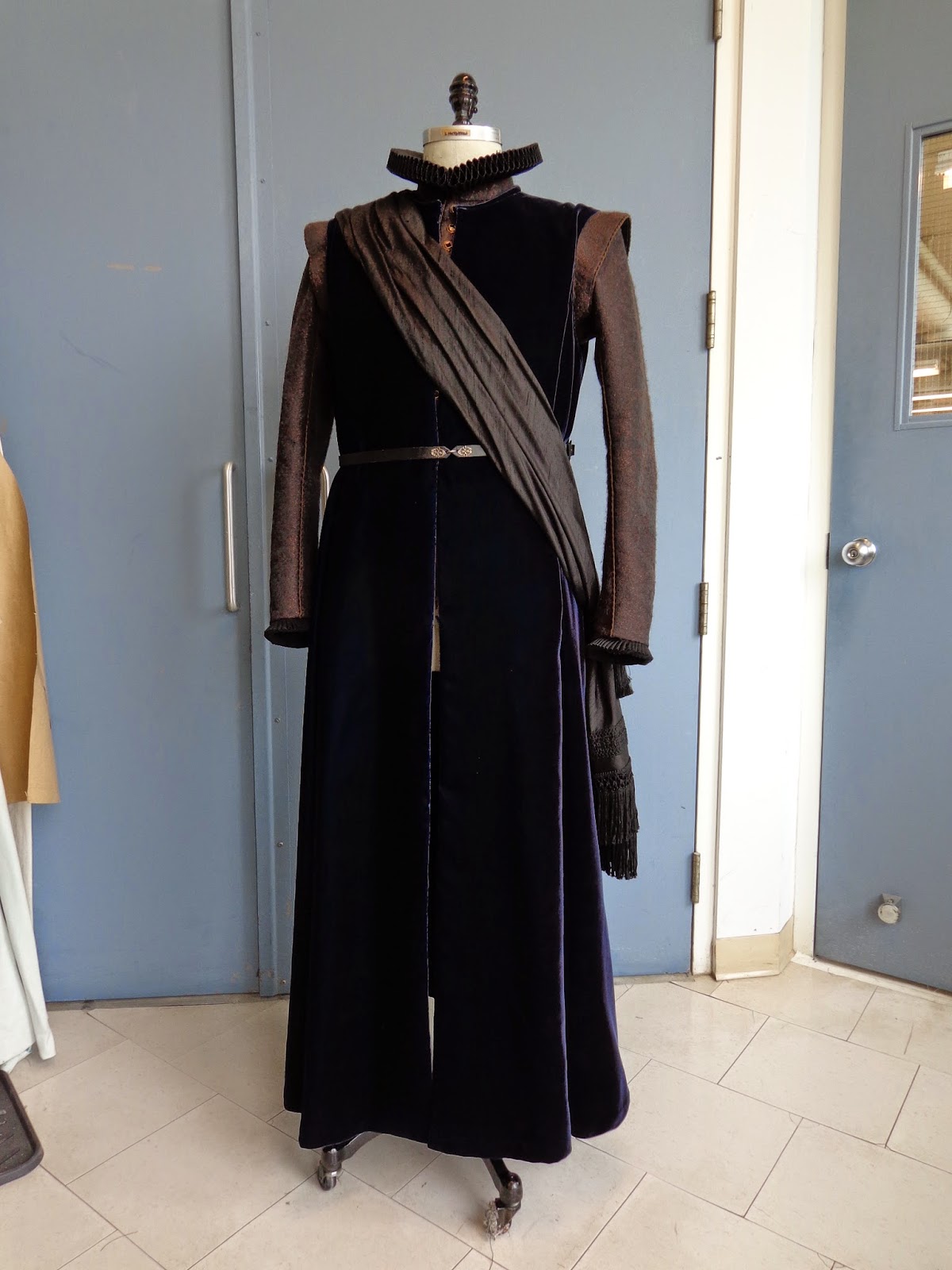 The blue velvet sleeveless gown and belt under the sash. 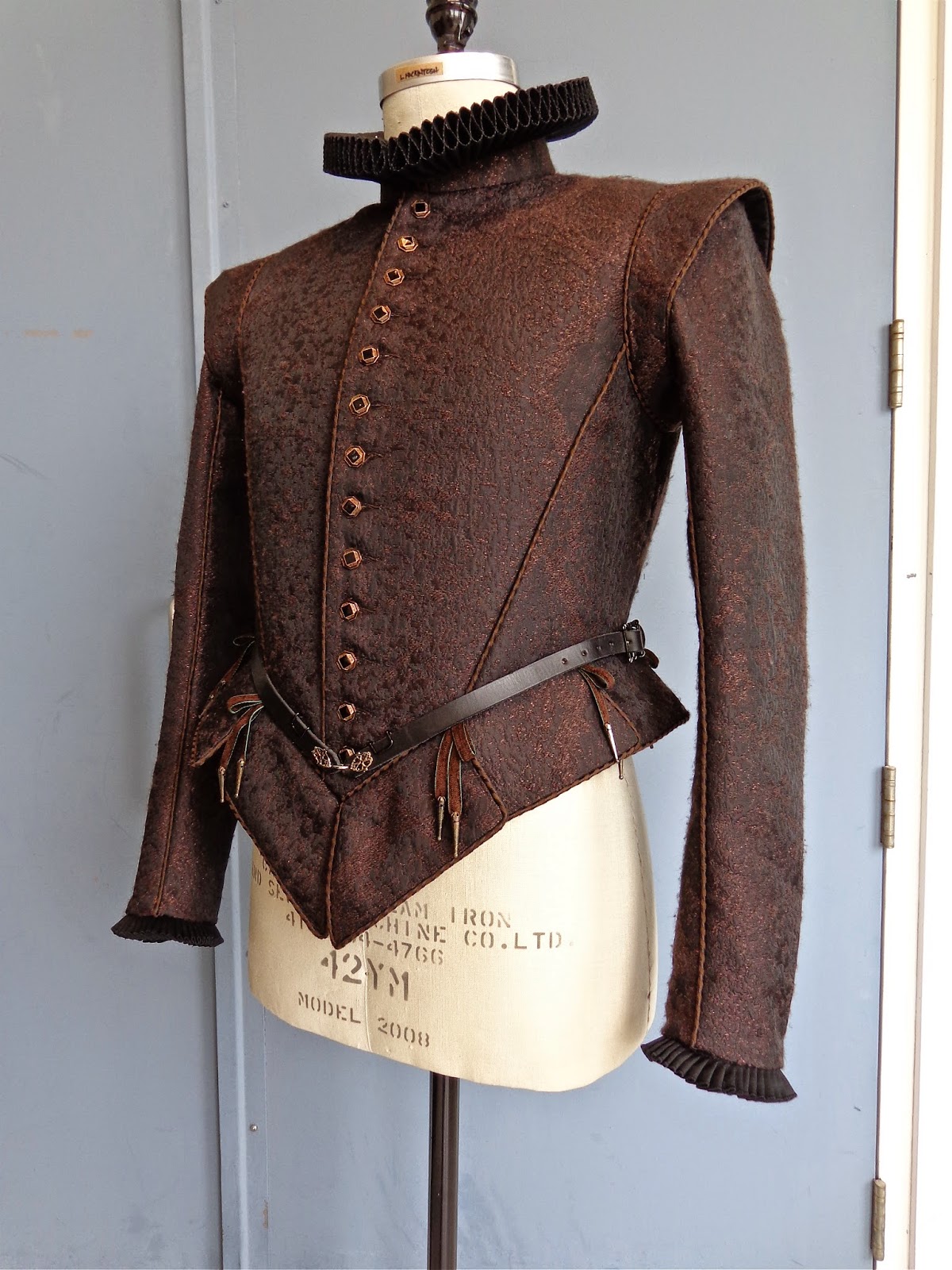 The doublet and ruff worn under the blue velvet.

There is also a pair of suede breeches, which didn't make it into my camera, but are indeed worn under the blue velvet gown.


Many layers indeed, and quite a task to wear and perform in under the hot stage lights in the middle of summer.


To wrap up the prom dress saga, here's a rundown of the finishing process.
Once I had the skirt attached to the bodice, I turned the CB allowance on the bodice to the inside and cross stitched it down.
I sewed a hook and loop at the top and basted a zipper in place. I then pick stitched the zipper in.


Then I made a belt out of the bias lame that I had fused with wool fuse. I didn't want it to lose its shape so I sewed in a piece of grosgrain. I stitched it by machine on one side and cross stitched the other side down and finished the inside with a piece of ribbon to cover the gap. It had two hooks and loops sewn on the ends to close it, and it was tacked to the dress waist by hand at the back and sides. I tacked it at the CF too but not quite in the right place as I noticed it pulled a little when she had it on. Oh well.... 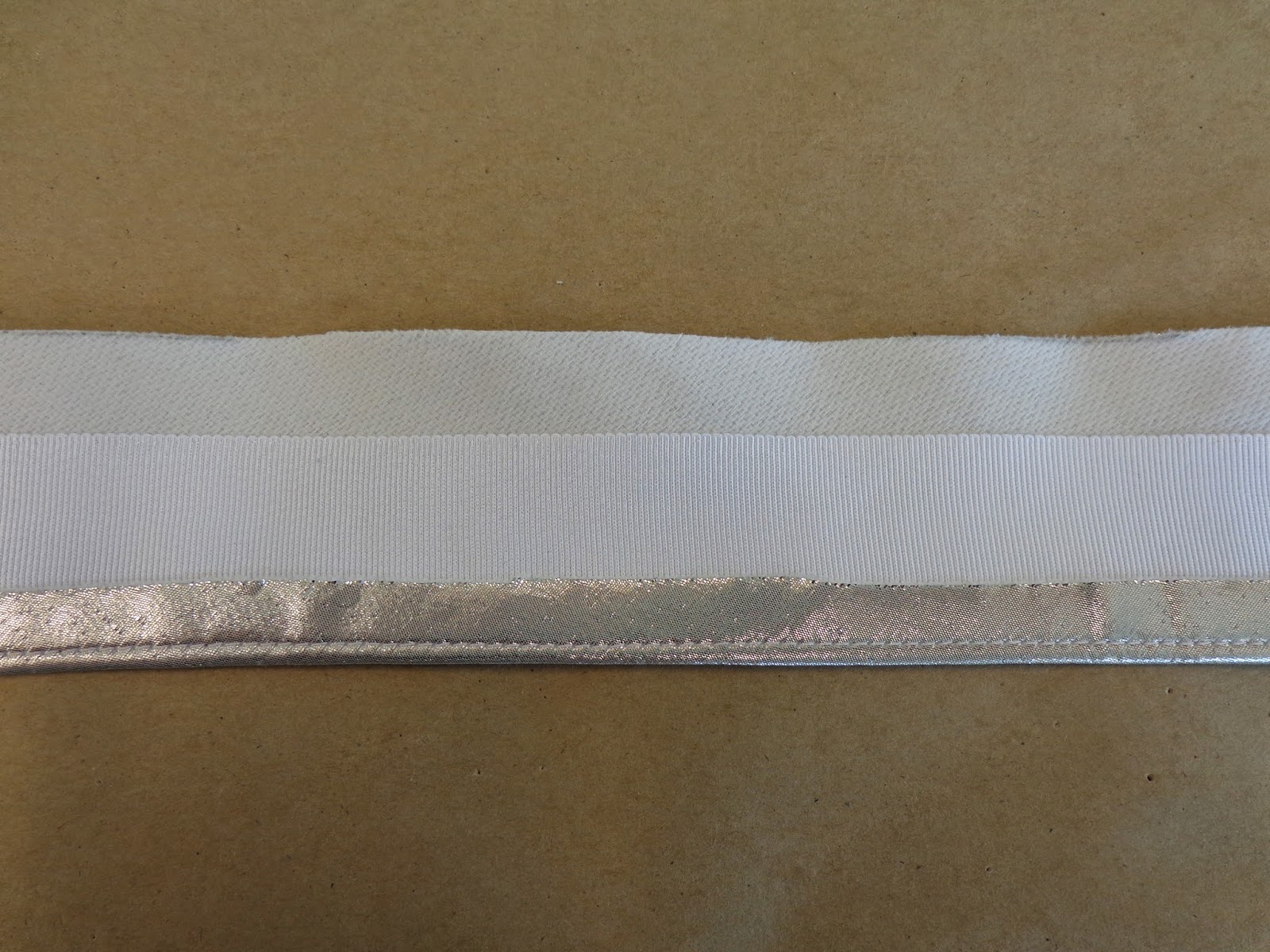 I stitched the bias straps in place by hand, picking through about an 1/8th of an inch from the bodice edge. 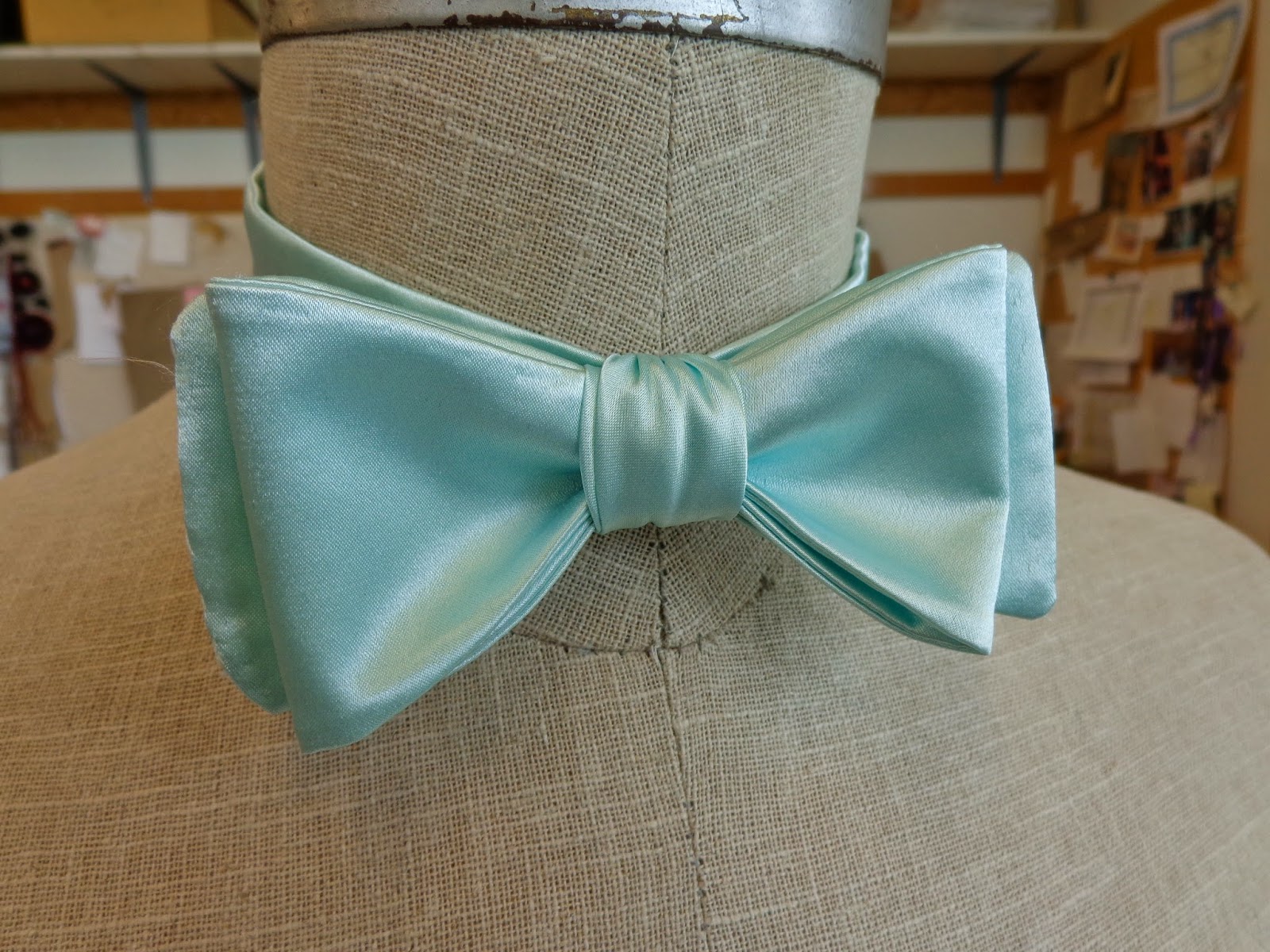 Last but not least I made a bow tie. How could I refuse at this point?


Why blue? Two dresses. I made two dresses for two different proms. Can't believe I did that!

But here's a crazy story... I took the blue fabric scrap to work so I could fuse some interfacing on it. I did it at lunch. Every one had left the room and I had just finished pressing 3 metres of muslin for a toile. I got the fabric and interfacing ready on the ironing table and walked away for a minute to check something else, and when I returned I took the iron and put it on the fabric and it melted right through the interfacing and poly stain. I mean melted it leaving an iron shaped hole in the fabric and a melted crust of blue polyester satin in an iron shape on the iron table cover. I have never experienced this before. The iron thermostat had gone haywire and overheated. I took some hot iron cleaner and tried to clean the sole plate and it boiled.
Good thing it wasn't the dress!!!!
Luckily I had another scrap of fabric.

Finally, two dresses, one happy girl, one exhausted mother (awake til she got home, hello 3am). 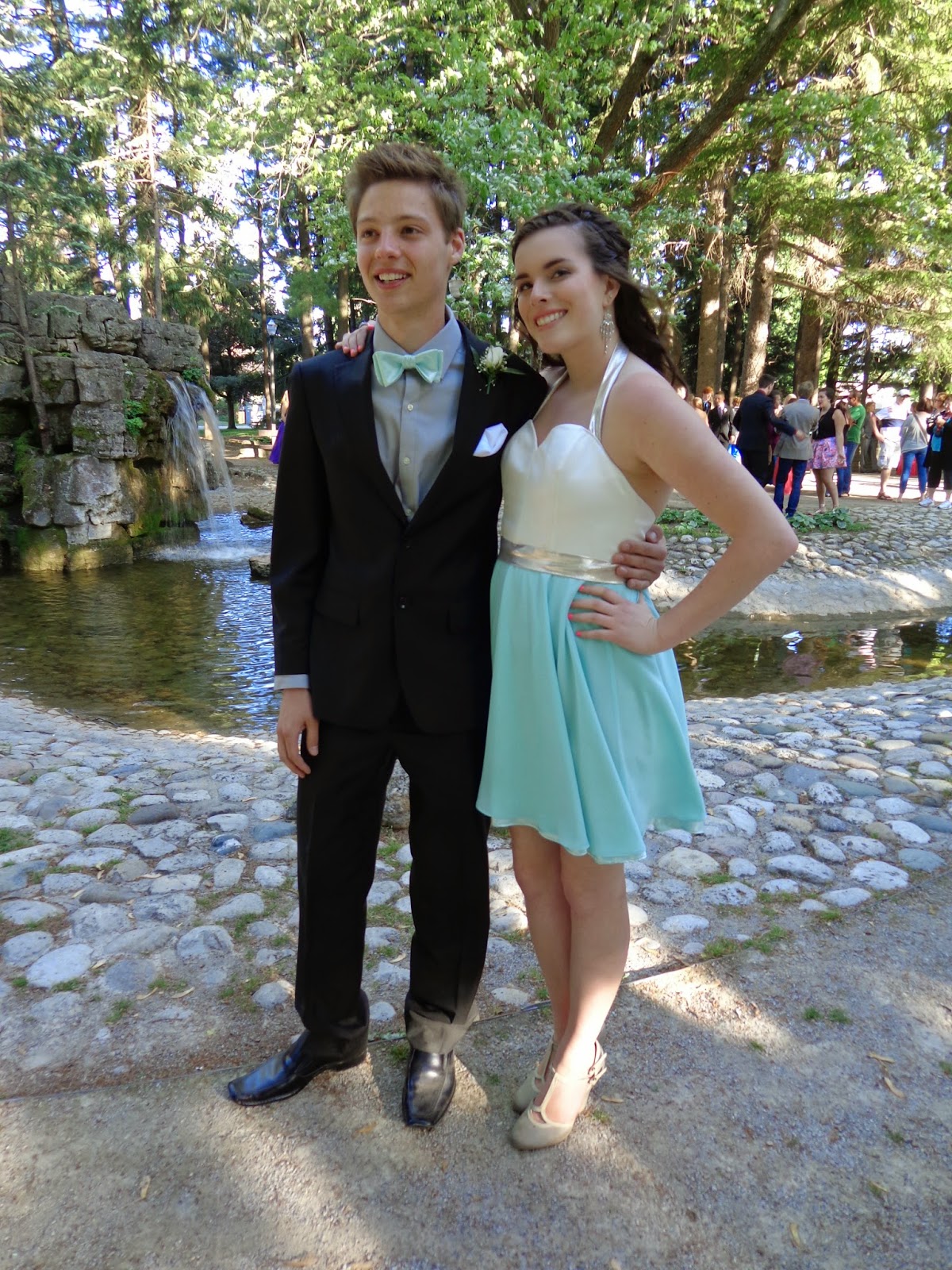 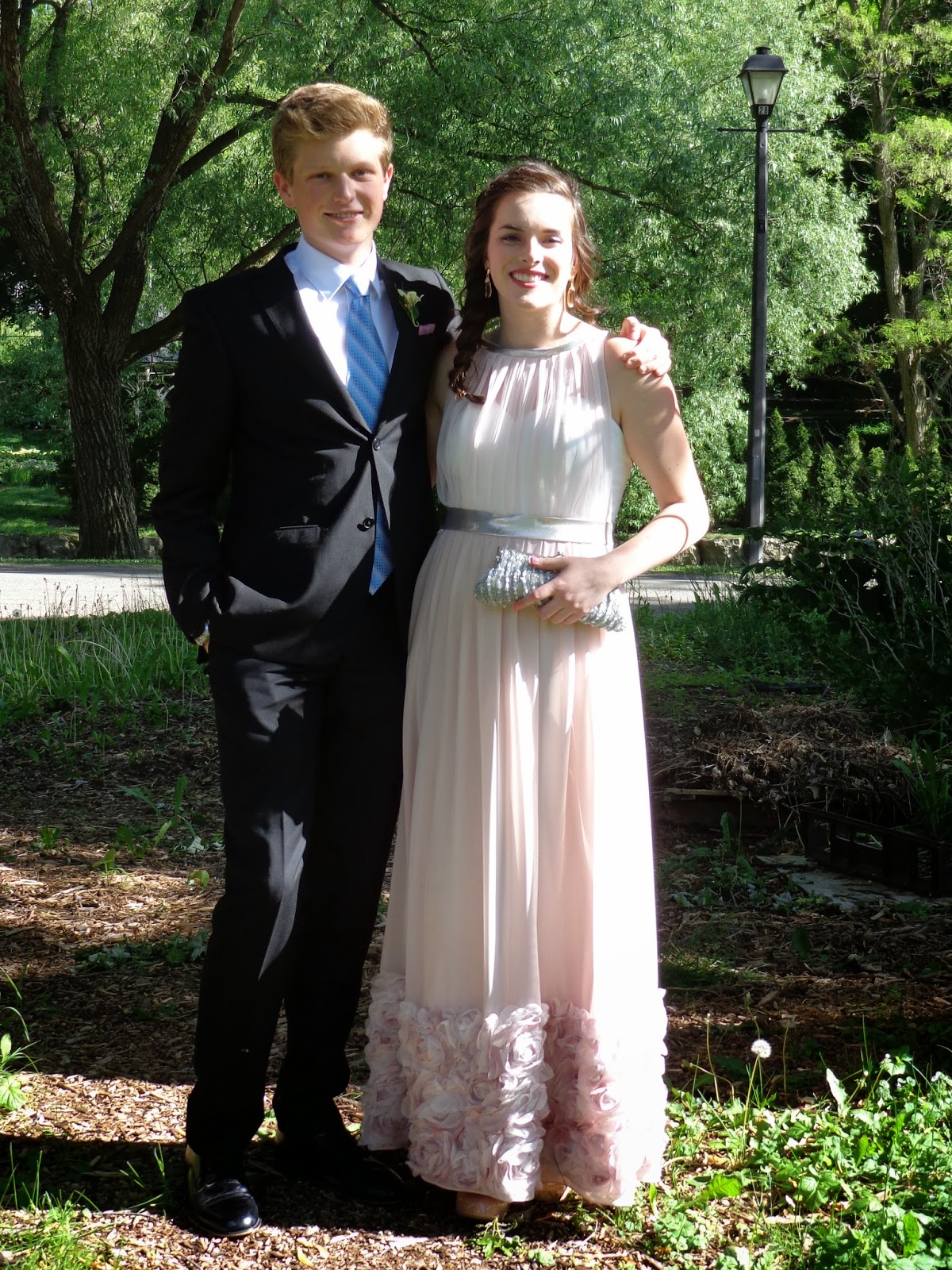 I really meant to be more diligent with documenting the process, but you know, I think I would still be stitching them if I had.

Now somebody has to get out and cut the weeds grass in the yard! The things that get neglected while sewing after work.

Now back to the usual fare here. I have some 18th century and Roman costumes to do!
Posted by Terri at 8:18 PM 7 comments:

Well, like many projects, I had the best intentions of documenting the complete process, and then reality took over as I was sewing after work and at home and before I knew it, I realized I hadn't taken as many pictures of the process as I had envisioned. At least the dresses were finished on time!
Here's a little summary:

The chiffon over skirt was pleated up and I hand basted the pleats first then I ran a line of machine stitching on that line as well as a half an inch both above and below before trimming away some of the excess fabric. I figured that I wouldn't be lucky enough to not have to adjust the length so these lines of stitching kept everything together when the time came to adjust the length. I basted the chiffon skirt to the underlayer at the waist and pinned it to the bodice on a dress stand to check the hem, and sure enough, I needed to make a little adjustment on the sides, so I unpicked the basting bit by bit and repinned until everything looked good and then I rebasted the waist of the skirts.
You can see the amount I adjusted at the sides in this picture. 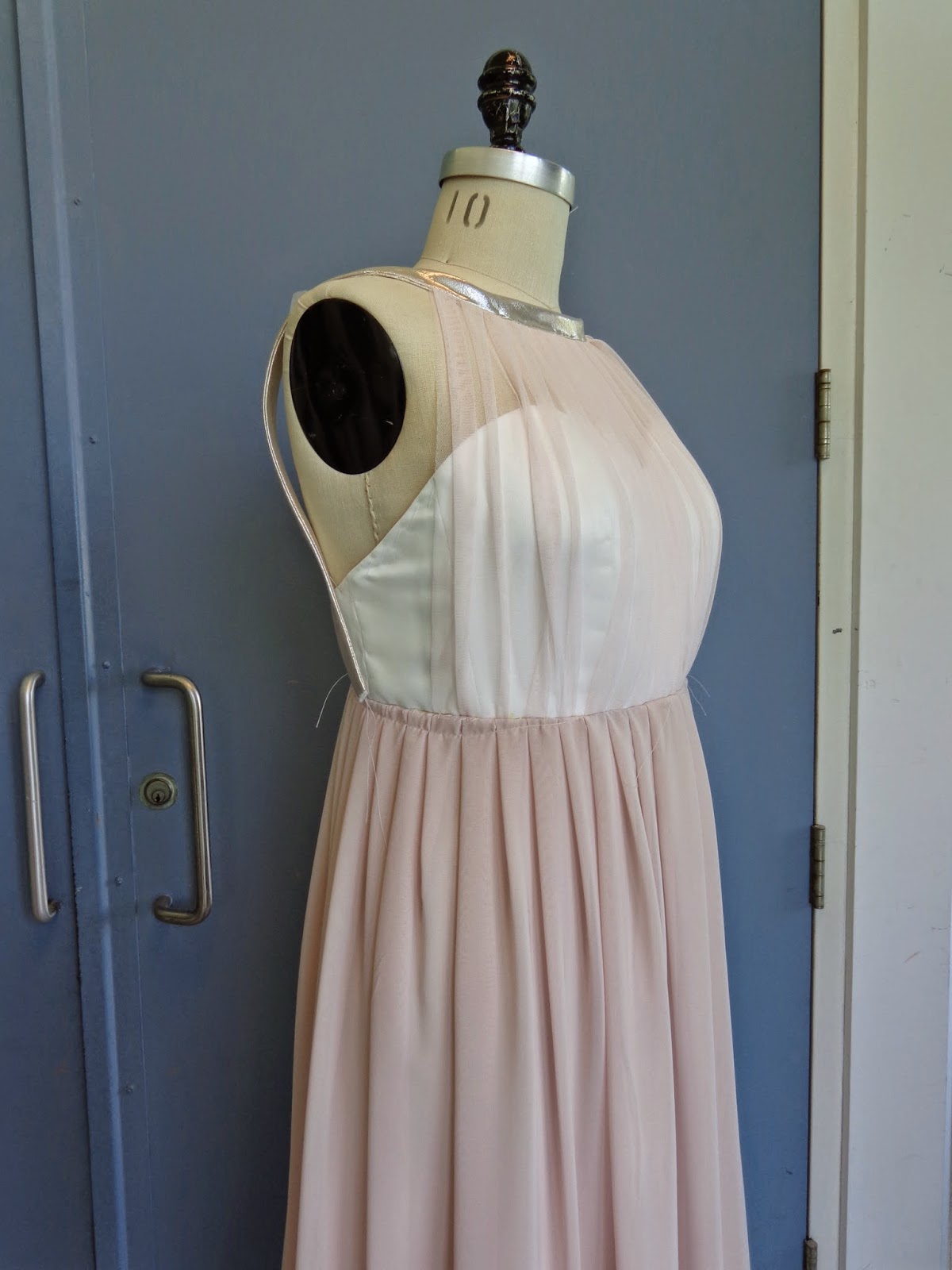 The bodice is two layers of polyester white satin. Certainly not the most forgiving fabric. That being said this is a dress that likely will be worn once, so no point in bemoaning the fact that it is what it is.
I marked out each piece separately for both the under and overlayer.
I used the seam allowances of the underlayer to create bone channels for the plastic boning. The only seam allowance that gave me trouble was the front panel over the bust. This fabric doesn't take well to being eased and as the edge of the 1/2" wide  seam allowance is slightly longer than the seam it is a part of, it rippled a bit when making the bone casing. It wouldn't press out well either, so if I did it again, (which I did in the second dress) I would make a separate bone casing for that particular bone and then the seam allowance can be trimmed down and made to behave.

I also made sure to machine stitch the top edge and waist line of each of the pieces for the inner layer. This shows me the pattern line, but more importantly, stays the areas of the bodice that are a bit on the bias, such as the side front panel at the top edge. I checked the measurements of the pieces against the pattern after this. That side front panel had stretched out ever so slightly so I used that stay stitch to ease the edge back to its correct size.

I then sewed the top layer of satin just on the outer edge of my pattern lines to allow a smidgen of ease.
Place the bodice right sides together and bagged out the upper edge, pressed, under stitched and trimmed the seam allowance down. Then I basted along the upper edge to hold the fabrics as one and smoothed everything in place before basting the layers together at the waist, and then serging the raw edge of the waist and CB seam allowances.

Once the bodice was prepared, I worked on the pleated overlayer. I used a bias strip rather than the shaped piece in my original plan (thanks again to colleagues!). The bias can mold around the body and a bonus was that the tension on the bias piece made the front area stand up vertically and the rest of the strap laid flat! I also could make length/tension adjustments easily!
I fused the lame with a piece of wool fuse which is a soft spongy fusible I had on hand. 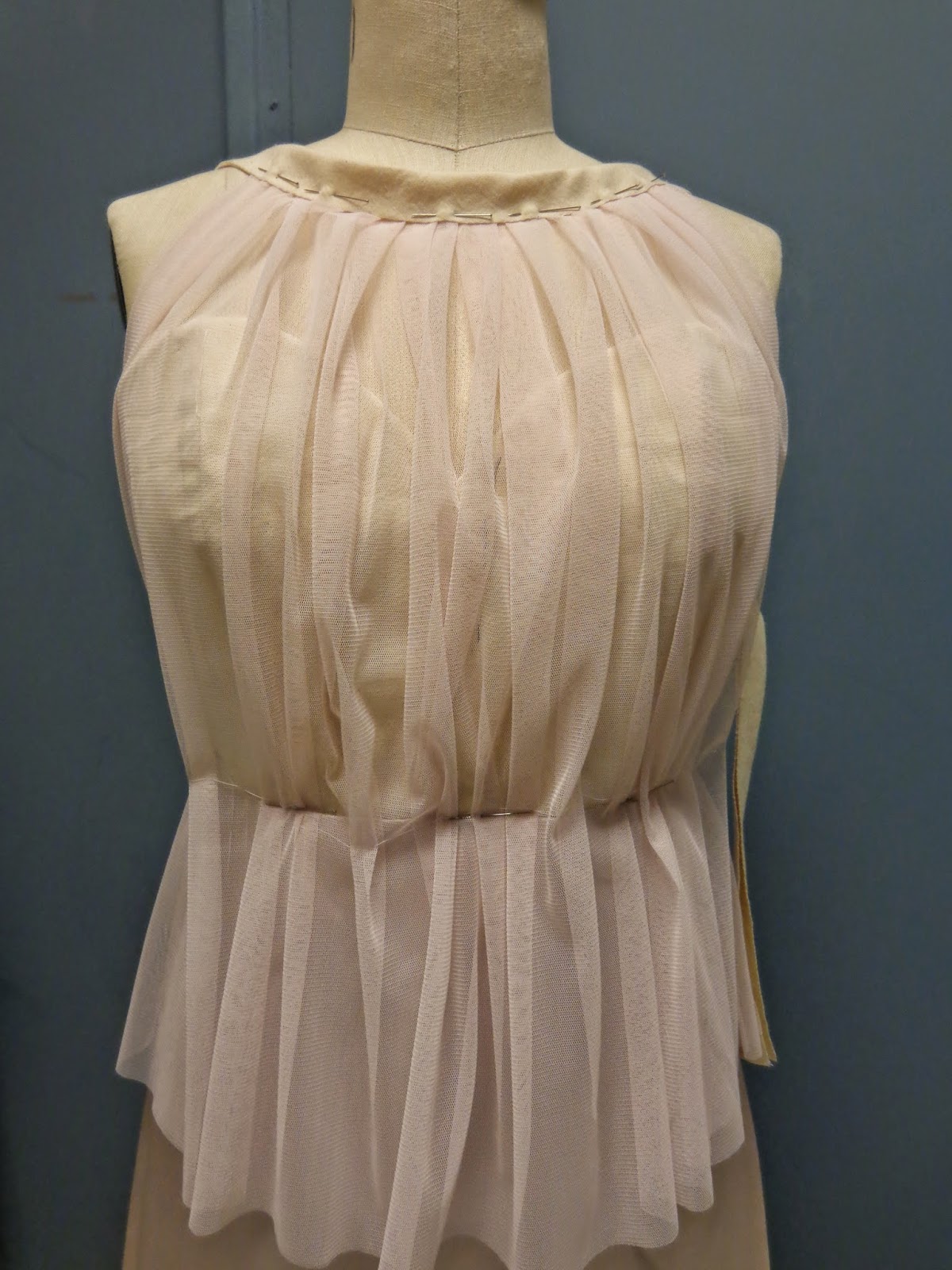 I had this prepared and prefit from an earlier fitting,
so I stitched the top edge of the pleated net to the lame and then arranged the pleating at the waist. Baste the layers together at the waist,  then baste the skirts on and fit to check.

Everything seemed fine! so I finally machined bodice to skirt, and trimmed the excess seam allowances down.

The worst was over!

next up will be all the finishing details.