Almost finished or A rack of suits 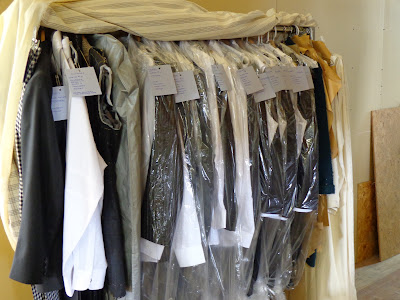 Oh, we are almost finished the project!
I started bagging up the suits today. I tagged them and double checked everything.
It is very gratifying to have accomplished all this work.

We made five complete tail suits, which included altering the shirts, adding dance briefs and quick changing the bow ties by snapping them to the collars.
We also made 9 other suits, five of which were three piece suits, plus an extra pair of trousers.
We put period collars on the shirts, and quick changed some of them as well.

I put the last eight buttonholes in today as well, so that is done too.

I need to box up the remaining fabric, finish up my paperwork and arrange delivery. I am looking forward to seeing them worn when the show techs.

Next week I start back at my regular gig, and I will be working on three very different shows: Fiddler on the Roof, Mary Stuart, and Blithe Spirit. It should be interesting, and I will keep you posted.
Posted by Terri at 7:43 PM 6 comments: 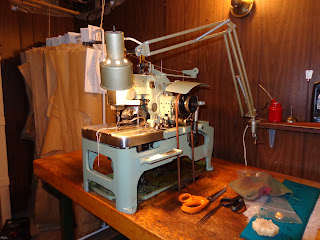 I am starting out the New Year with the end of the current project in sight. I have to say it was difficult to peel me away from taking a well deserved break over the holidays. In fact finishing the project was looming ever larger in my mind to the point where I was feeling overwhelmed with the  thought of getting back to it.
In the end, once I started it wasn't as big as it had become in my imagination.

Today, for instance, I headed over to Evan's place to deal with the buttonholes. I have about 76 buttonholes to put into the various jackets and waistcoats, and I am going to use his Reece industrial buttonhole machine to do them.
I remember the days when we had to make the buttonholes by hand, and as satisfying as it is to do that, it takes time- probably a good 15 to 20 minutes per buttonhole once you know how to do them and you get into the groove. Luckily, we have acquired a couple of these machines at work, and they do a very good job and save a vast amount of time and money. Evan has invested in one of his own, which is the one I will use for my job. 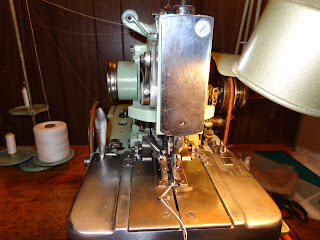 This machine will make either a regular keyhole buttonhole or an "eyeless" buttonhole. It uses two threads and a gimp, and stitches a knotted chain stitch over the gimp.
The buttonhole is marked on the wrong side of the garment- usually by chalk marking a lengthwise guideline and a cross mark for the centre of the "eye".  I have thread marked the placement on these white epaulettes, as I don't like to mark up white fabric with a coloured line. The area around the buttonhole is stabilized by hand basting, after the marks are made.
The size of the buttonhole is regulated by a sliding mechanism with a wing nut on the right side of the machine bed. It will make buttonholes from approx 3/8" up to 2 1/2" long.
The gimp and lower thread feed up from the underside, and the needle thread is on top.
There is a cutting blade that automatically cuts the keyhole and a portion of the length, which I asked to have removed in case I don't get the positioning correct the first time. I can easily unpick the correct thread and pull the chain stitch out quickly in order to redo the buttonhole again. 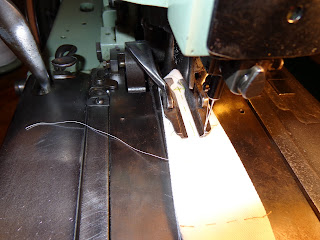 The garment is placed wrong side up on the machine bed and clamped into position as you can see here. Once it is clamped in position, you engage the clutch and push the finger lever to start the process.
The spreaders engage and pull the fabric taut, as the stitching starts. The upper portion of the machine moves from front to back and returns as the stitching is complete. It is loud and fast. Under 5 seconds per buttonhole I would say.

Once it is finished, the clamps release and you pull the needle thread gently, then clip it and pull the garment out, catching the lower thread and gimp under the holder and then cut the thread, leaving a tail of threads hanging off the garment and also on the machine.
All that remains then is to secure the threads and remove the basting, cut the hole and sew on the buttons.

So, I did some today, and I will go over and do the rest on Monday and we will be 76 steps closer to finishing.