So I have just been in a whirlwind of activity since finishing the opera. I am not sure if I am afraid that when I stop I will crash, but I have been getting a lot done. Except for the garden.....it still needs some TLC.

But following up to the previous post in which I am making a pattern for an amautik inspired parka, I made a toile for Yvette, and fit it on her on Saturday. It wasn't too bad, although the hood needed work, as I suspected.

Today I managed to alter the pattern and trace a copy of it out for her so she can order material. She is planning on making it out of melton with a separate wind resistant outer shell.

Here is what it looked like on my table. No sleeves in the photo. 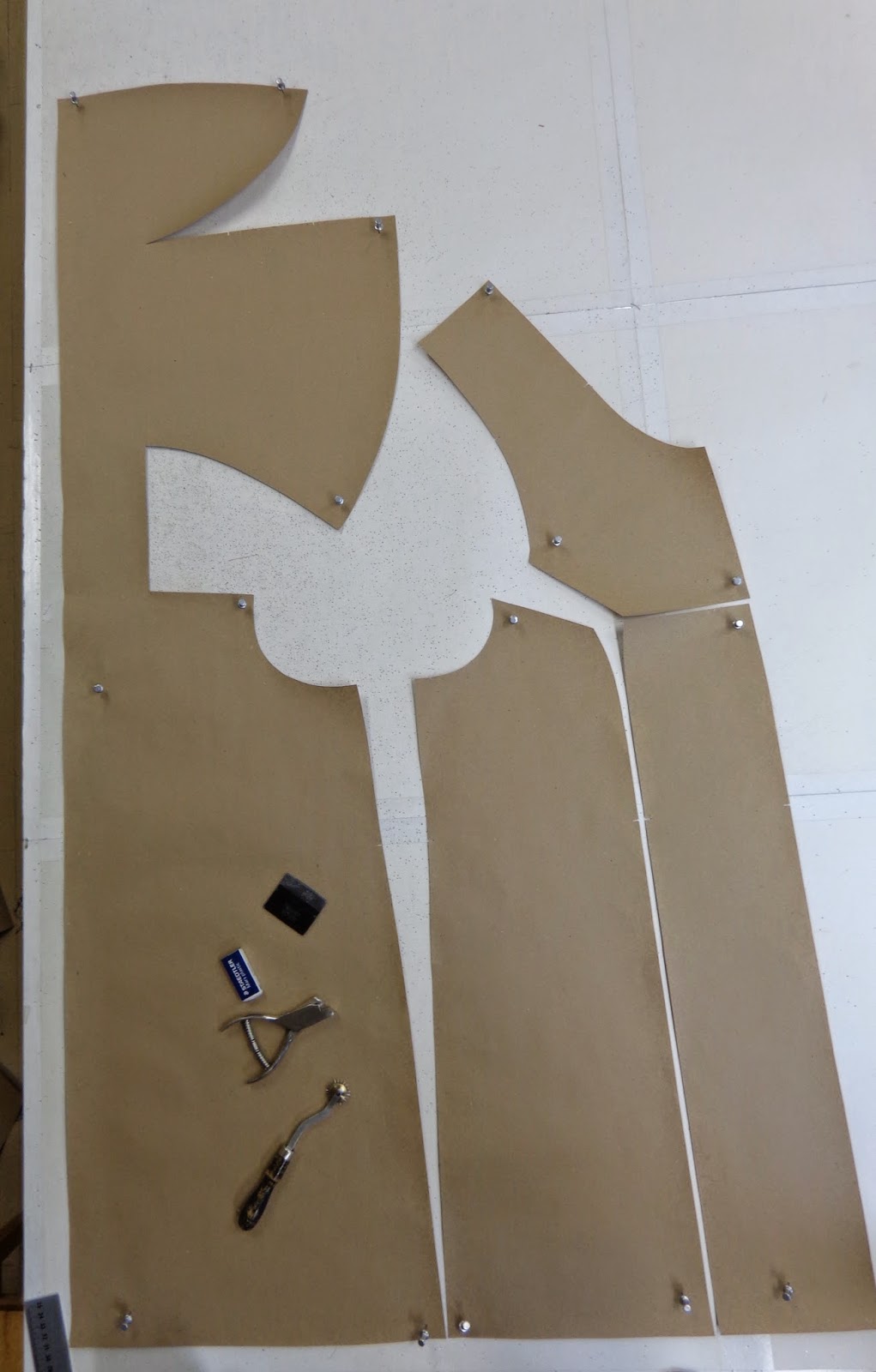 Interesting don't you think? Can you see how it goes together? This is a simplified amautik inspired piece. The child's amautik that I took a pattern from is much more complicated!

Interesting things are the only "extra-curricular" projects I take on these days.

This was indeed "interesting", and I hope she gets her fabric soon, because now I am interested in seeing it as a finished garment. I will leave it to her to add her rickrack trim details and patch pockets. I wonder if she is going to put beading on it? She showed me some beautiful beaded pieces that she rescued from mukluks and other garments they wore in the north, that finally wore out.
Really beautiful work.

Oh, I have a pair of beaded gauntlet gloves.....just let me run and get them. 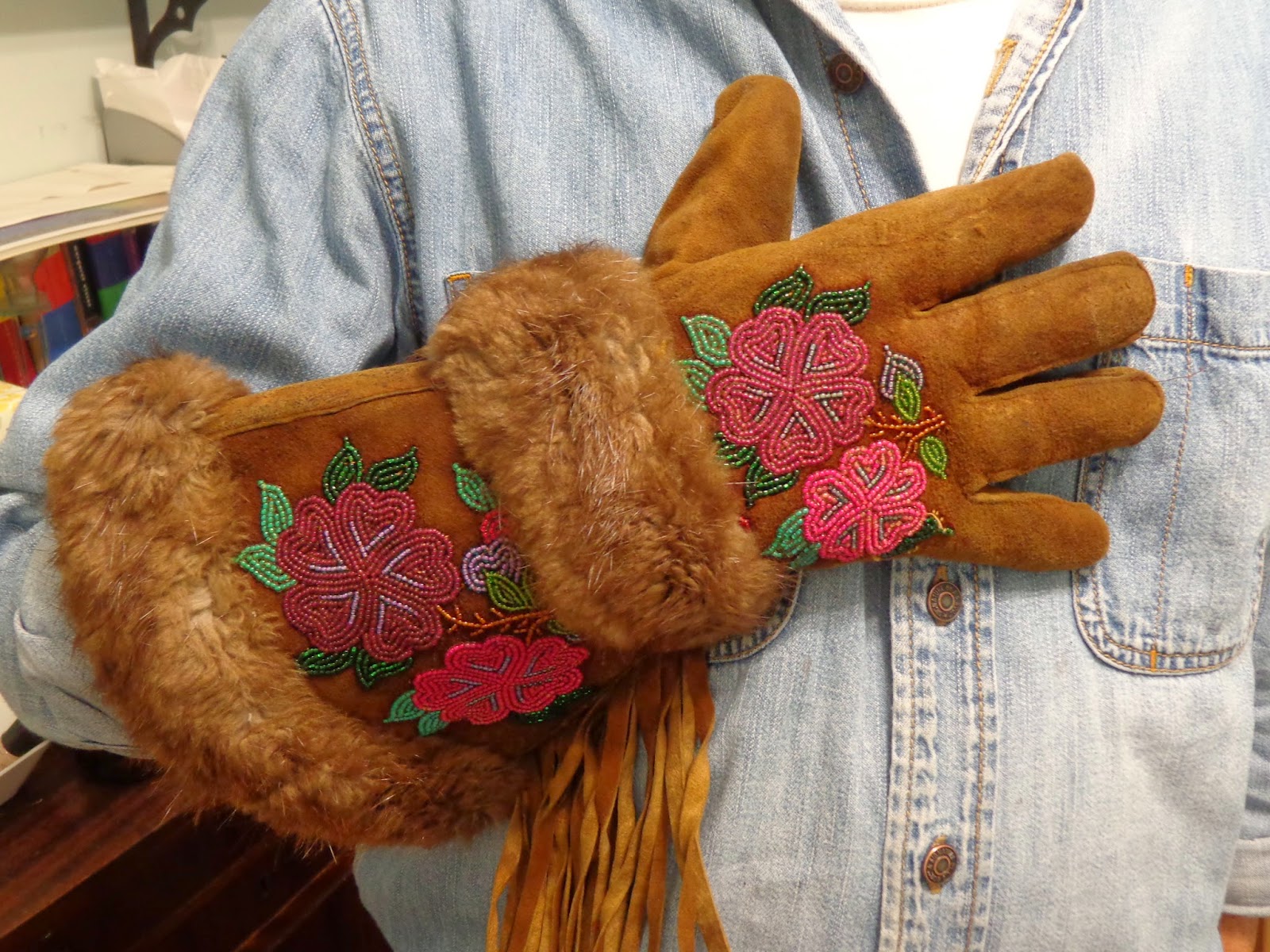 These were given to my father in law many years ago. He worked for the Indian Affairs Department of the Canadian government in Saskatchewan.

Thanks to my DH who happened by and was willing to be a model.

Every so often interesting projects turn up out of the blue and I have to say that  love it when this happens.
Give me a puzzle and I am on it.

This week I am making a pattern for a friend who spend quite some time in the Arctic decades ago and wanted to make herself a new winter coat. She wants a modern take on a traditional amautik.

I have not checked all the information I was told about, and I do not pretend to know very much at all about these garments. Just be forewarned.

She told me how the Inuit would wrap their babies when they were small and carry them inside the coat, up against the mothers back. The coats were cut in such a way that as the babies grew, they were accommodated by the shape of the coat. The hoods were made large enough to cover the heads of both the mother and child.
The babies were held in place with a cord or sash that looped through a hanging cord at the centre front of the coat, pulled down between the breasts and wrapped around the waist holding the back of the coat tight and keeping the baby inside. She recounted how the mothers would line the inside of the coat back with moss, (no diapers then) that would absorb the child's urine and feces for later removal.

She gave me a child's size cotton amautik that she had, which I took a pattern from, and I have to say it was a very complicated garment. More complicated than it looks. 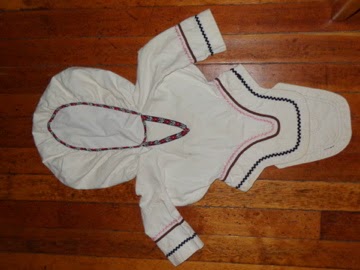 I am refraining from posting a picture of the pattern I made, as I believe that it is considered the intellectual property of the Inuit and that needs to be respected.

It was quite fun to design a coat for her incorporating some of the traditional aspects of the amautik.
I will have a mock up fitting with her tomorrow, and I am interested to see if she likes it. I know the hood isn't quite right on mine, but I really was winging it! Hooray for mock ups! She plans on making the coat out of melton, and has a nice little Arctic fox in her freezer (really!) that she may use to trim the hood....

The other puzzle I am working on is a soft case for a stand up bass I made for another friend almost 20 years ago. The zipper finally went!
Just a wee repair, but it was another one of those fascinating puzzles that grabbed my attention. His old case was not sturdy and it was falling apart and I took it on myself to make a new one all those years ago.

In other news, if you want to see the waistcoat for the Opera in action so to speak, click here.
The beautiful dress and the other ladies' costume was cut by my colleague Margaret.

A little while ago I posted about a waistcoat that I was cutting for a woman, and here it is all finished.
(Please forgive the dotty covering on the stand, it is a bit annoying to look at but I don't have time to change it.) 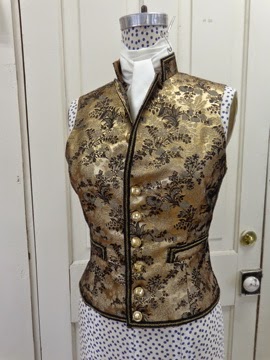 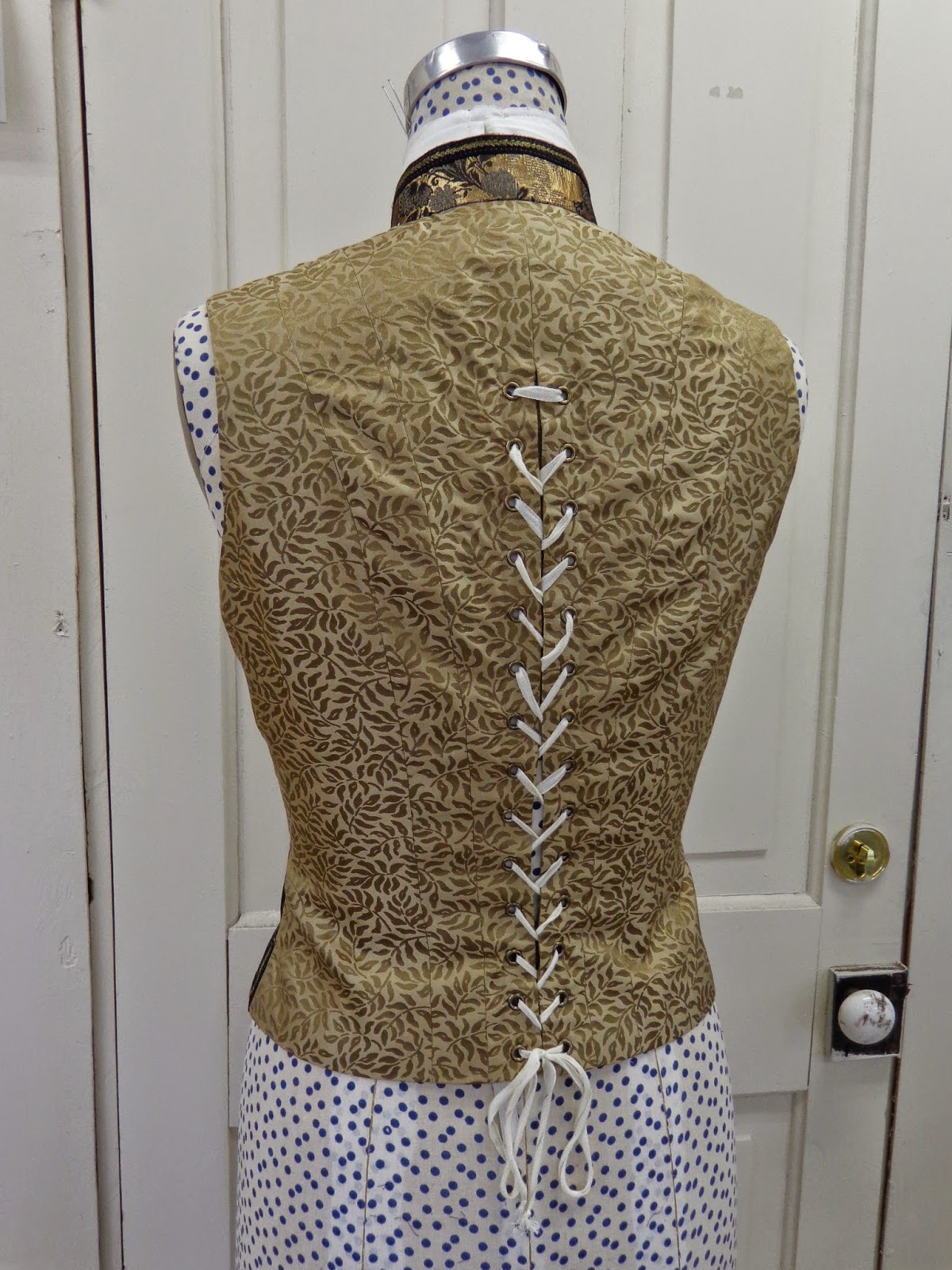 It is too bad that the detail seaming I put into the backs is lost with this fabric but hey, I know it is there.
If I was making another maybe for myself, I would either pipe the seams or make a detail of it with top stitching or something. Would look great in leather or suede.......don't you think. Not that I will ever get around to making it for myself. Sigh 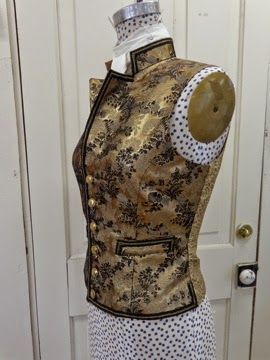 Well, I guess it is not completely finished (what ever is?)  as I do not have a pretty ribbon or cording to lace the back up, but I am sure I will get something before this show goes in front of the audience.

It doesn't quite fit my stand as well as it does on the real person (what ever does?) but I am quite happy with the whole costume overall. Considering I don't do women's wear..... 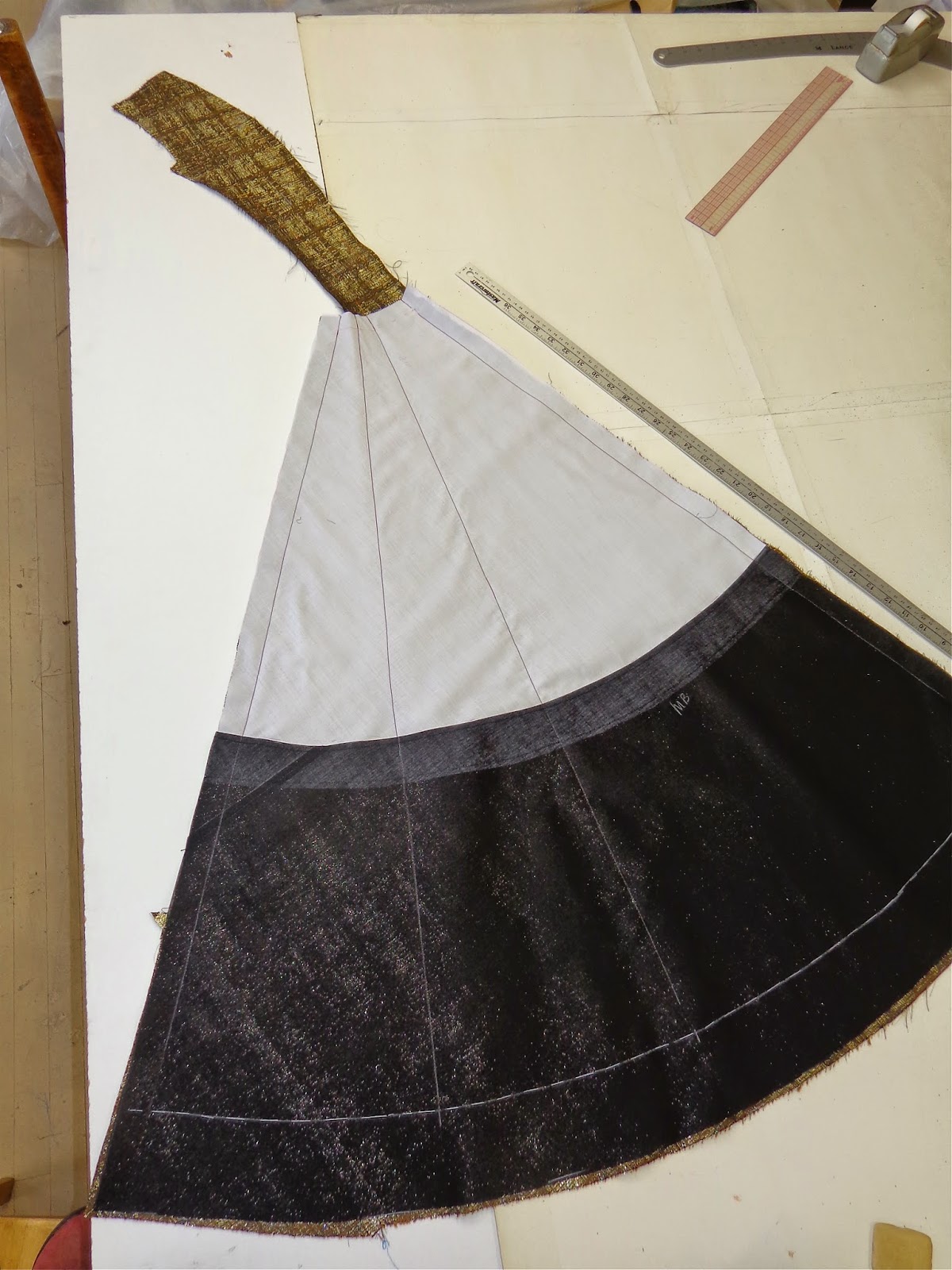 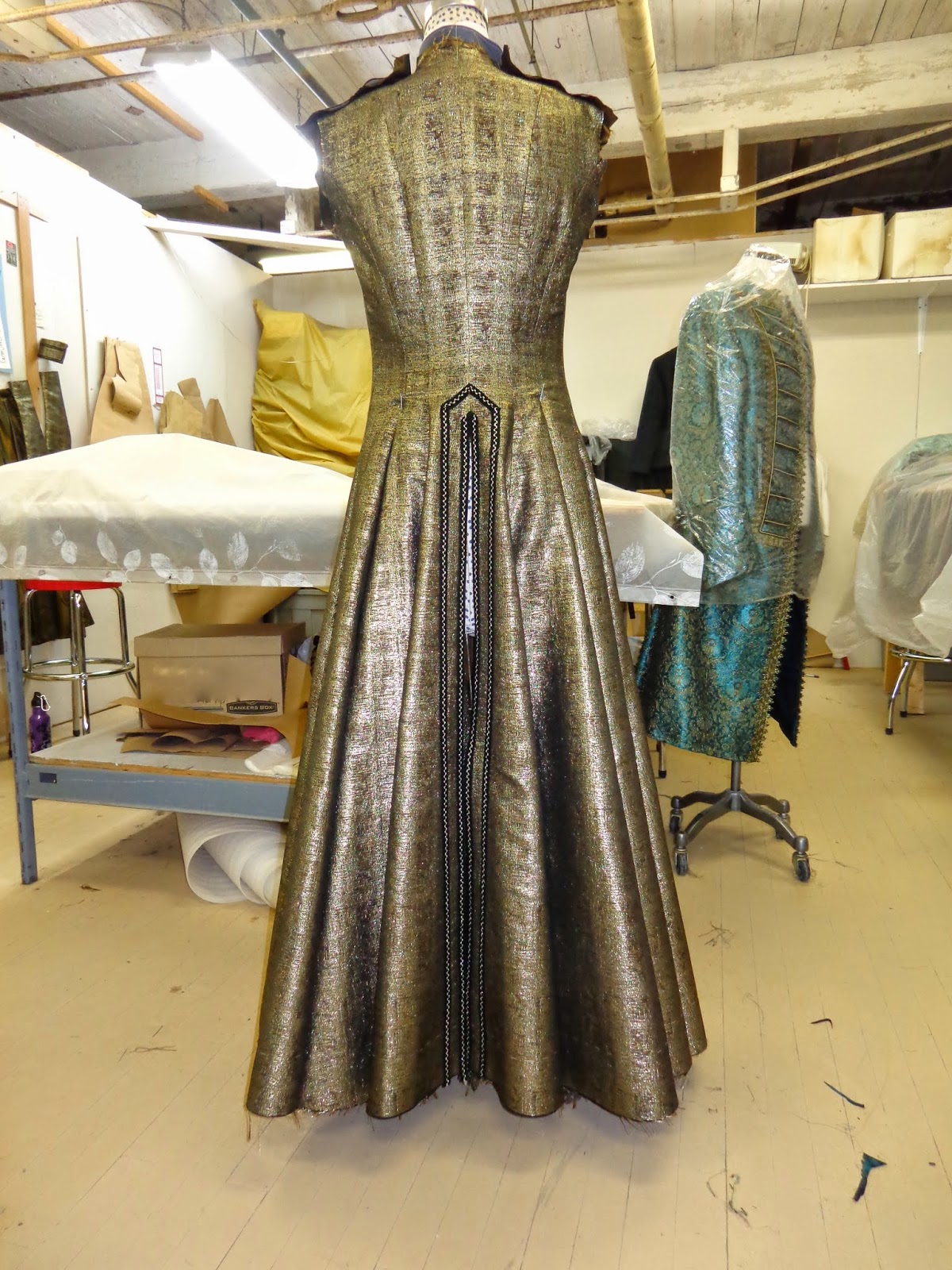 These period coats have scads of trim, and the placement of the trim needs to be worked out in detail according to the sketch and what the designer has chosen.
The construction of the coats would come to a standstill at some point if we don't have the trim decisions.
Luckily, the designer of this project is organized and has thought out which trim he wanted to purchase and where it would go. On top of that, the trim arrived with tags indicating what it was for and in individual bundles/bags, separated by character.
Budding designers take note!
This is a way to impress your construction team.

The first thing I do is make a trim map on my pattern, and then lay out the trim flat on the table.
The trim choices can dictate changes to the design. For instance the design may have 12 horizontal lines between the neck and waist but the spacing change if the trim is narrow or wide. 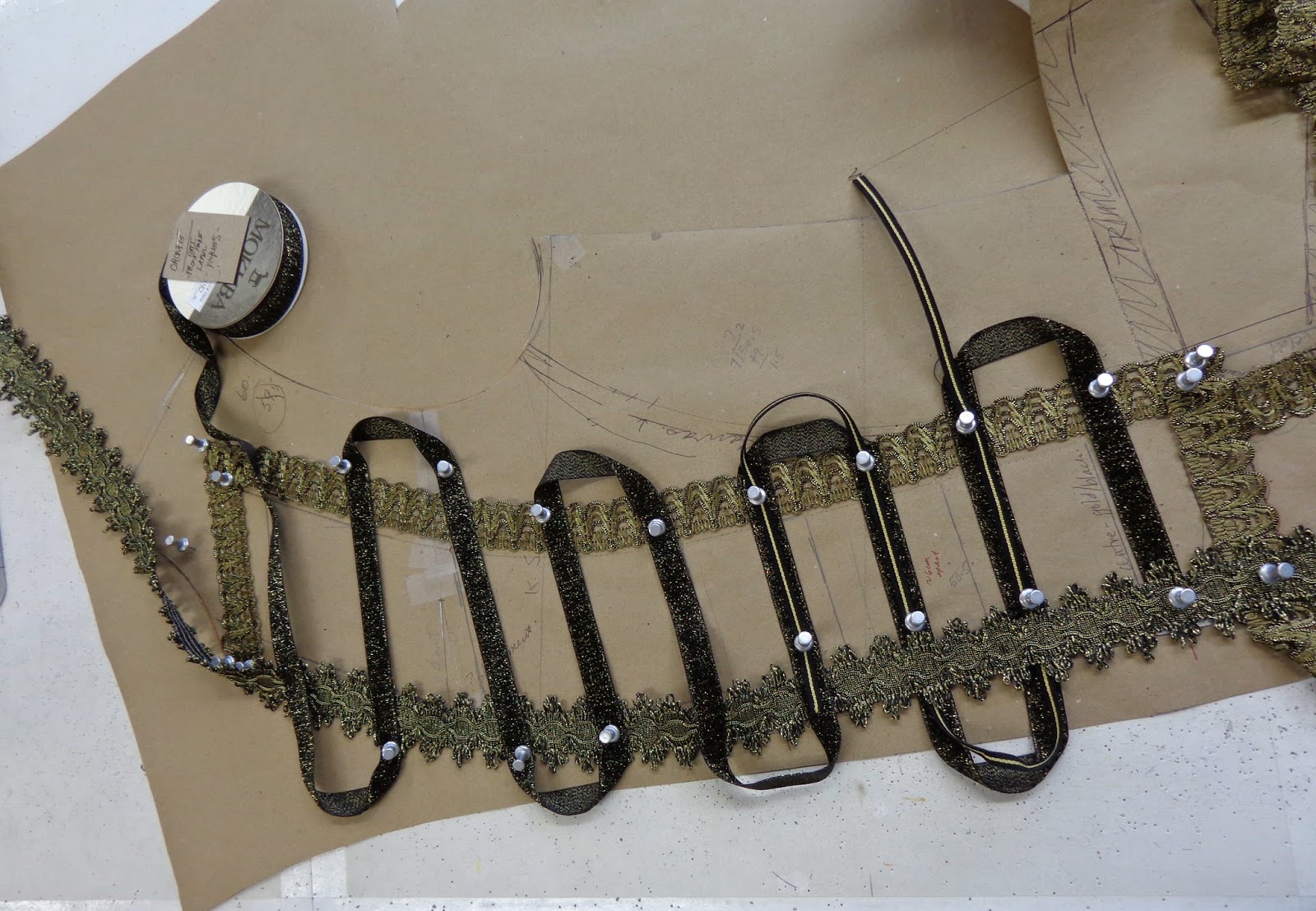 Our designer M.G.  dropped by the studio and we tweaked the layout of the trim a bit, at which point I make a trim map for the tailor. This means a separate pattern piece that they can use as a guideline for chalking out the placement. 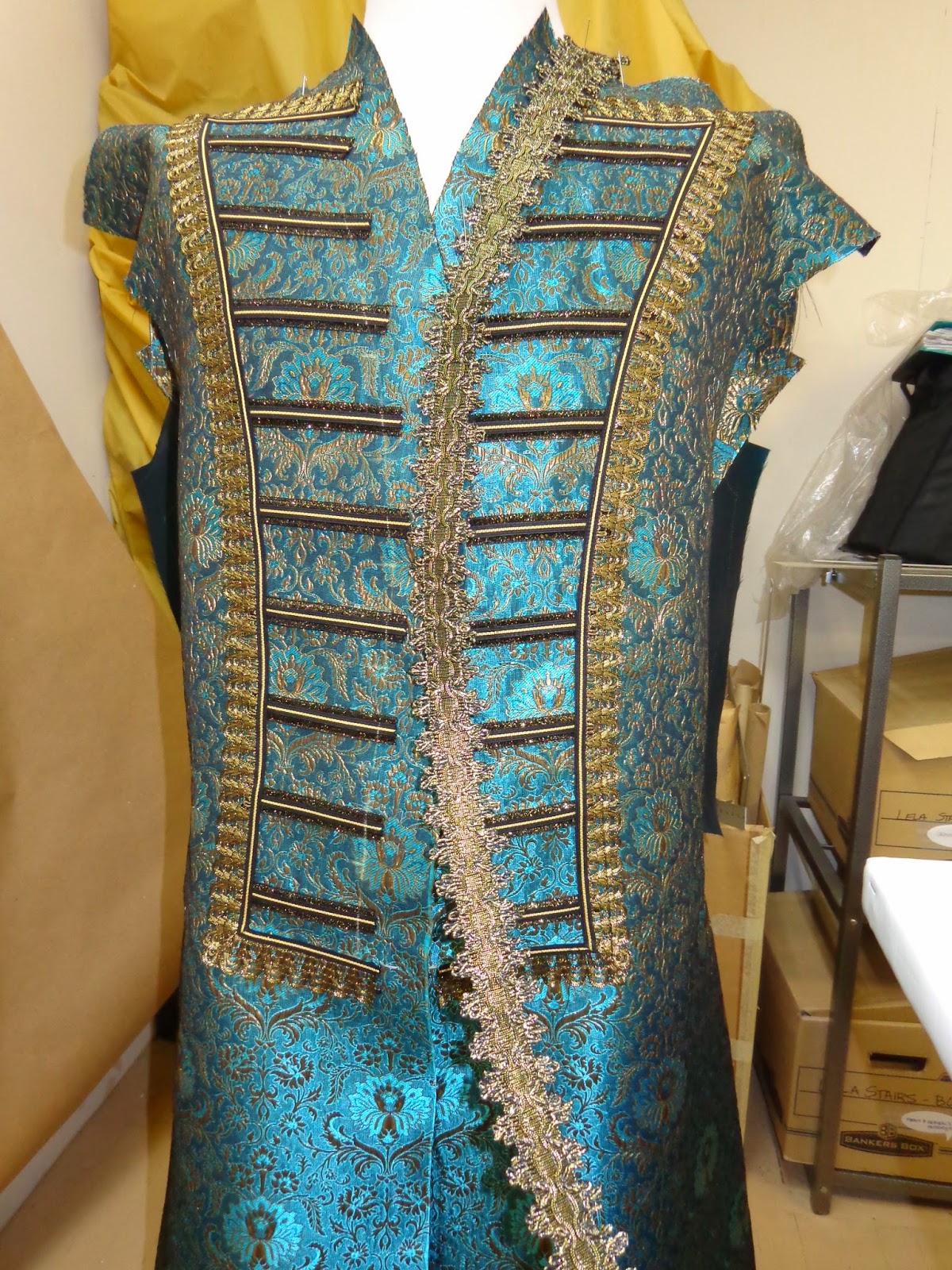 Here you can see the coat fronts in progress. The trim must go on by machine. No budget for handwork on that scale.
Another note for budding designers. Get to know how garments are constructed and why things need to be done in a certain order.

The coat does not sit on the body like it is pinned here. It will look even better once they sit at the correct cutaway angle.

Onwards, I have two more trim maps to complete.
Posted by Terri at 12:09 PM No comments: 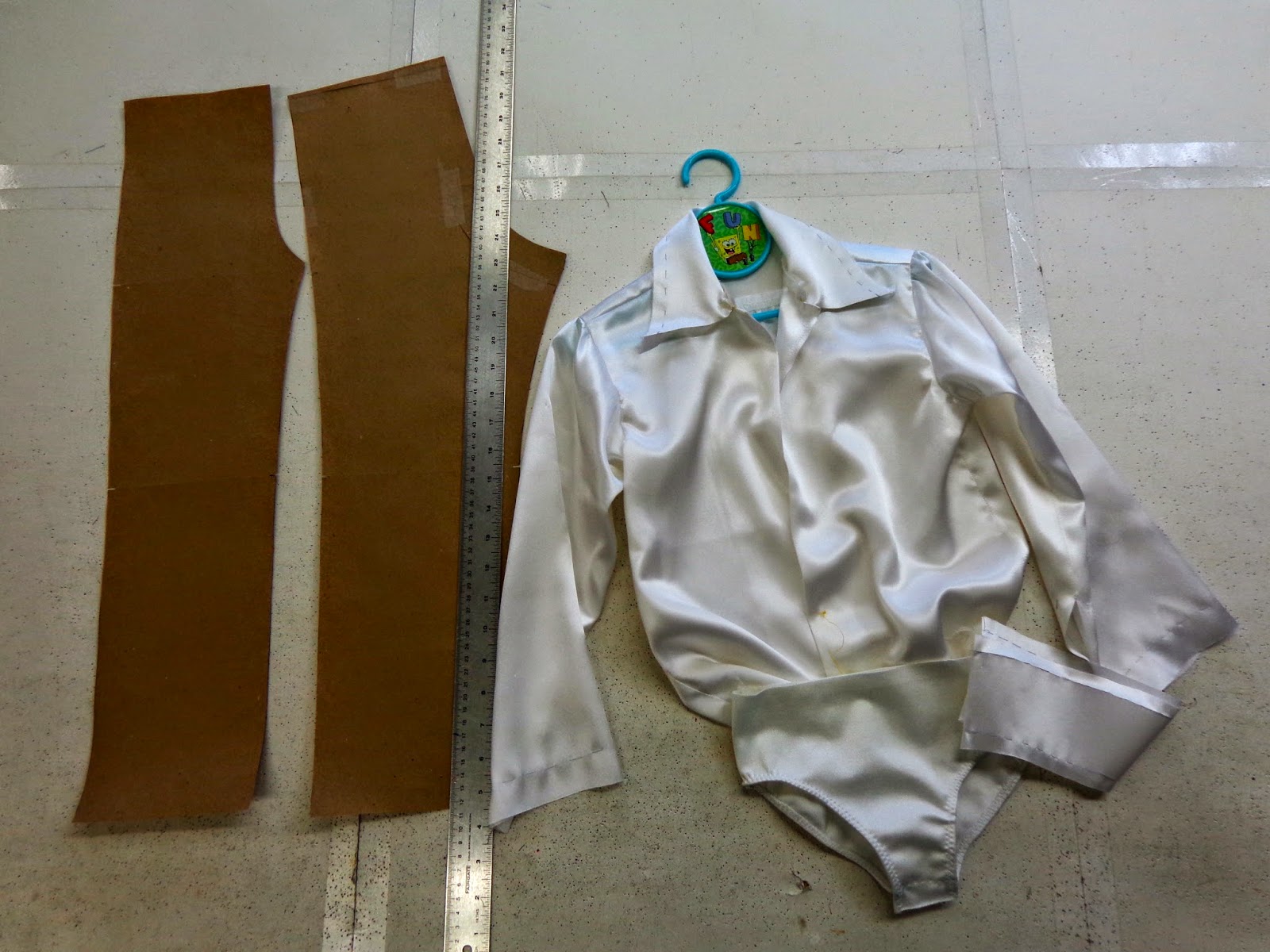 This is about half the chest size of the last men's shirt pattern I made! About half the hip size too for the trousers.

Since my daughter is now an adult, it has been a long time since I made something in this size.


I did find a child size hanger though.

This was a request made through a dance/skating connection, and although I am busy with the Opera project, I couldn't resist this.

I had a fitting yesterday, and all went very well. I will let you know what it was for after the event, as it is to be a bit of a surprise for the audience.