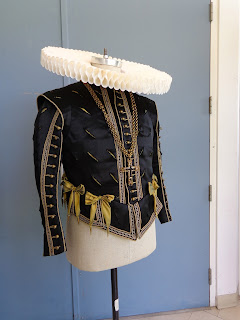 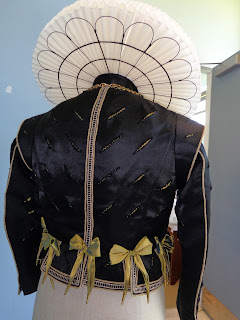 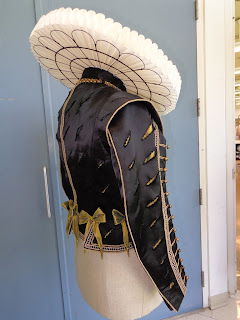 Well, time just seems to be in short supply these days.
We have had such an intense couple of weeks trying to get these two shows up and running. It required a few more people than expected and luckily management was able to bring in some extra hands to assist us. I am just coming up for air now!
We also have had an unusual situation in requiring a rebuild of a doublet, so we will be whipping together a new doublet at top speed, because we are scheduled to be finished our work by Friday.

Where did we leave off?
ahhh... trunkhose. I was really trying to get a pair fully documented but due to the intensity of the many aspects of my job, I cannot seem to get time to get a photo at every stage, no matter how I try!

So here is what I do have. 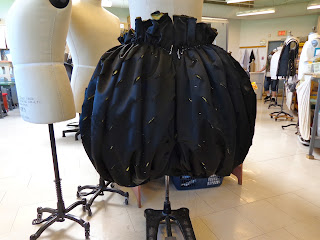 The breeches are gathered in at the waist and checked before the excess fabric above the waistline is cut away. We started with a large pleat at the centre front and centre back then ran gathering stitches by machine, using a heavy nylon thread in the bobbin. The two layers of silk here just managed to be gathered to size. If we couldn't gather it by machine, (the machine stitch length is limited to 5 or 6mm) our only other option was to hand stitch the gathering lines. 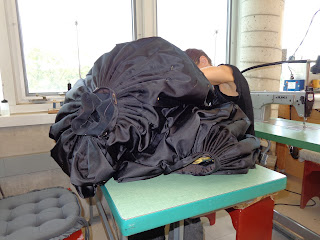 Once everything is deemed to be okay, the waistband fabric is stitched to the silk. The inner trouser is put in place- you can see its seam allowances sticking out of the leg in this picture.

After that we attach the two layers together.
In this method of having an inner and outer layer, we are making the inner layer the most functional- in that the CF fly has a zipper and a structured waistband. The outer shell of silk therefore floats over top, attached at the top of the inside kneeband and at the waistline.
The seam allowances of the gathered silk layers at the waistband are turned downwards, and live in between the inner and outer layers. this makes the waistband smooth and flat. If those seam allowances were left upwards as one would normally do with a pair of trousers, the waistline would become thicker and bulky and then the doublet would not fit over it all.

This does take a bit of wrangling, marrying the two layers together at the waist.

We get it all in place, basted by hand, then using a zipper foot, stitch by machine through the waistline catching all the layers together. The top edge of the silk waistband is then hand felled to the inner structured waistband to finish them. The centre front of the silk layer can either have its own closures or it can be slipped down to the CF of the inner breeches. You have a few choices in how you want them to close.

I think one of the advantages of making them like this, is that the top layer could easily be removed from the inner if you wanted to reconfigure them for someone else in the future. The inner structure is smooth against the person wearing them, the profile of the outer silk can be changed by adjusting the inner leg length, so they can be altered for a different design or taller or shorter person fairly easily.

I did get some photos of the almost finished outfit on a hanging stand, but the stand is much longer in the body than the actor wearing these so please imagine if you will, the waistlines meeting! 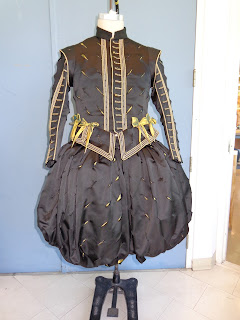 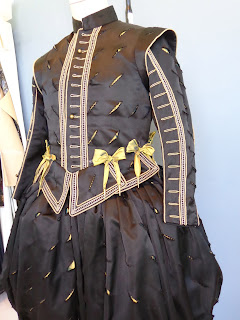 I hope my verbal descriptions make sense to you. Perhaps next time we make a pair of these I will get a chance to take the missing photos!