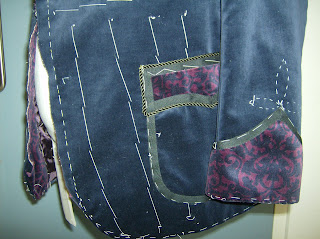 Well, actually it is velveteen or cotton velvet. Much easier than rayon or silk velvet to work with when making a jacket.

I posted earlier about the inspiration behind this jacket here, and this is the version we are making.

I had cut right into the fabric for this, fit the basic shell, taken it apart and marked the alterations. I then cut the linings and facing, then the pockets and cuffs were made up and basted on. The sleeves are basted in and then we are ready to fit. 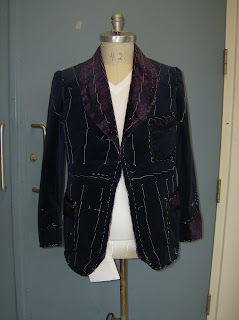 The binding trim that we got to work with is a knit! It is much wider than the original vintage trim, but so far it has handled well. I don't know about how you feel about velvet fabrics but they can be very tricky to sew. Not necessarily sewing two pieces of velvet together, because the naps grip each other,but sewing other fabrics to velvet. The depth of the nap can cause no end of slippage or bending as you try to machine sew linings to facings or trim to an edge.

The flat trim that is on the pockets will also bind the edges of the jacket, finishing off the lapels and hem. The cording is separate and will be zigged onto the edge of the flat binding.
On the sleeve cuffs we will probably attach the cording by hand, as it needs to go along the edge of the cuff, then form a clover leaf (which is outlined in white) on the sleeve itself then come back onto the cuff to finish off.

So we have a few alterations to make, dealing with a severely dropped right shoulder and corresponding sleeve length issue, then on towards finishing this for Thursday.  (it is sitting crookedly on the wrong stand)
I was sidelined Friday by some virus that was going around and I know that when I am back to work on Monday, there will be a line up of sewers with questions to answer and details to be finalized so I am off to get more rest.
Posted by Terri at 10:03 AM 2 comments: 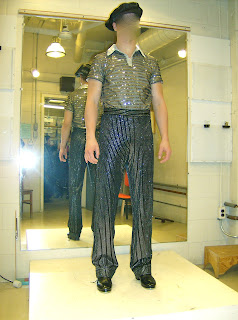 I realized I hadn't posted a follow-up to the sequined T-shirt post so here it is on the actor/dancer for a fitting.

The shirt needs to be slimmed in through the body, and have the sleeves shortened. We did put it on a dance brief that kept it from blousing up and out of the waistband as the dancer moved.

The trousers were Lycra and were able to be made without a fly opening. They had enough stretch to be pulled-on without excess fabric eased into the waist.
The leg length needs to be shortened. Again. One thing to note about using this type of fabric for loose hanging trousers is that without tension on the fabric around the body, the weight of the fabric causes it to lengthen more than you think it will. Having cuffs on them adds to the weight too. It also gets narrower as it lengthens, so that is another thing to keep in mind. Remember to cut the rise shorter than you do for regular wool trousers. (These are notes to self!) Of course who knows when I will have to cut stretch 30's trousers next? Could be years from now.

Anyway, if these were tights, you have tension in both directions and that lengthwise stretch is controlled and minimized. Of course it is difficult to predict so the only option is to cut them out and fit them to see. 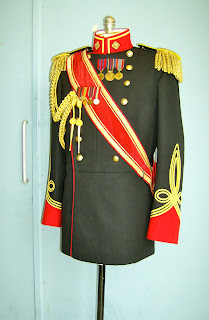 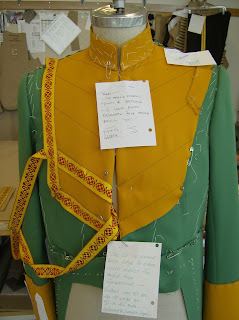 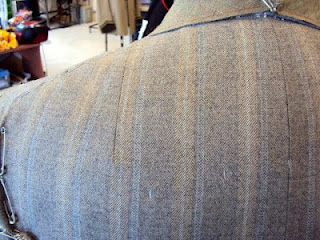 One of the most difficult figure issues to deal with is the stooped figure. In a recent situation, I had made a toile jacket for an actor and I knew that his pattern required some modification for a stooped back and rounded sloping shoulders.
I hadn't made anything for this person for a number of years, and I was surprised to have to open up the back another inch to get the jacket to fit properly. That is a full 1 and 3/4 inches additional length in the CB!
This is also supposed to be Edwardian so I cannot mask it with extra large shoulder pads either. Now, in a plain fabric such as his black cutaway jacket, I can just lay the pattern out as is, but when there is a stripe, that must be dealt with differently.
The CB neck must be in the middle of the stripe pattern, and if I laid the pattern out as is, I would have quite a bulls eye effect in the upper middle part of his back. That isn't a suitable option. If I straightened the CB by opening up more ease into the shoulder, I would end up with too much for the fabric to handle and if I opened it into the armhole, I can't ease enough in to make enough of a difference, so the other option is a shoulder dart.
Shoulder darts are quite common in women's wear but I have to say that I personally have never seen one in a man's jacket. I was so happy to see a reference to darting the back shoulder in a post on The Cutter and Tailor forum a couple of years ago, and ever since then I feel like I have some back up when I am required to do it for difficult figures. Especially difficult figures and striped fabrics.
The trick as far as I can tell is to not interrupt the main stripes in the dart. The dart end on this one needs to be moved just a tidge to the left, to follow the stripe edge exactly, but overall you can see the effect. The dart really isn't that noticeable when all is said and done, and the benefits outweigh any negatives as far as I am concerned.
You would not know this just from looking, but I will tell you, the other issue I had to deal with here, is the fabric. It actually is a one way design. As woven, the white stripes are on the one side of the stripe right across the width of the fabric. I had to make a choice. Either the stripes would travel around the body, always to the left for instance, or I could fold the fabric end to end and make it symmetrical, which is what I did. Great, so far so good, except when it comes to the collar. The collar is one piece, no seam at the CB. So the stripes travel one way only. Merde!
So unless I seam the top collar CB that is what will happen, and I have to decide soon.
Any thoughts?
............
We are probably the only ones who will notice or know. The stripe is subtle, and if the audience is that engrossed in the stripes on a jacket, then the play needs some help. I won't be putting a seam in the top collar.
I'll post the pattern modifications in a future post.
Posted by Terri at 9:59 AM 3 comments: 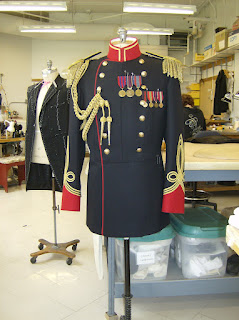 We are so close to being finished with this uniform, I couldn't resist taking a photo.
What is left to do?
I need to make sure the lanyard can be worn like this, I have a lot of reference for SB uniforms with lanyards that attach to a CF button, but I'm not sure of the DB protocol. Of course these are not specific copies of any particular uniform or regiment so we have a bit of freedom in what the designer wants to do. (People do write in on occasion to correct us in certain circumstances).
The "medals" need to be sewn in place. We usually thread mark the placement so they can be removed for cleaning and restitched later.
The epaulettes screw down, and the fittings come with a screw that needs a button or something like that to be epoxied or soldered to the top of the screw head. Normally the posts would be inserted through a hole in the shoulder, but we stitch them on the shoulder instead, so that in another season they can have different epaulettes and we don't have random holes. The same with the belt hooks. They are often poked through a hole so that the main part of the hardware is inside the jacket, but again, we need to have future flexibility of use.
I still need some kind of insignia for the collar, and I think that is it.
Made of heavy navy barathea, for an actor who is 6'4" tall, with a 10" drop (chest to waist size), worn with a leather belt and sword as well. Maybe a sash too. I'll have to confirm it with our designer.
Now, just another few days and a few more pieces to finish (like the cutaway behind the uniform) before Tuesday when the show will tech onstage.
Posted by Terri at 9:38 PM 2 comments:

random photos of costumes in progress

Oh, it has been very busy the past week or so. It is like the train we are on has picked up speed and we're on for the ride, no braking for the next little while.
I had first fabric fittings for two gentlemen this past week, and our deadline is the 17th. They have between them 11 pieces plus a pair of spats so that is 2 cutaways, one jacket, 4 waistcoats and 4 pairs of trousers. Those pieces are in addition to finishing up the rest of the workload on the show which at last count was 4 uniform tunics, 4 prs uniform trousers/breeches, another cutaway, two waistcoats, two trousers and refurbishing 4 other uniforms. I also have to work on the smoking jacket and another uniform for the next show, arrange understudy fittings for the last one and get a head start on the show in late May.
Phew, I'm exhausted thinking about it!
So, this post will just be a few photos of some pieces currently being worked on in the shops.
Enjoy.