There are so many books and not enough time or money to look at or buy them all!
I'd divide my reference materials into two categories: pictorial/design and technical. Some books straddle this divide too.

Lets have a look at the technical first, since they give some insight into how the patterns are made.

Its not as easy to find men's drafting and pattern making books as ones for women. Women's drafting books seem much more common, and they have their place when making men's costumes because we are not always just making suits.Patterns for big sleeves come to mind almost immediately.

I have a stash of drafting books that I use mainly for historical reference to what the pattern shapes looked like and I would never really expect to draft directly from them and call it a finished pattern. I think that many people expect to be able to use these drafts as is and make garments that fit. Wrong. There are many complex reasons for this. Everyone who published a book was convinced that their methods were highly superior to the next guy's and they had various theories, calculations and sometimes contraptions for drafting that can be difficult and tedious to understand and if you don't have the contraption, almost useless. The drafts can be misprinted or not proofread. They usually contain seam allowances within the draft but they assume you know where. You need to know something about traditional construction techniques to understand how they manipulated the fabric once it was cut. Modern wool rarely will behave like the wool of old. Modern bodies are shaped differently. Our aesthetic has changed. I've rarely run into a designer who really wanted to see the baggy crotch of a period breeches draft front and centre onstage.

I have had the opportunity to run a few pattern making classes and one of the most interesting and valuable things we did was to take 5 different period drafting books and actually draft trousers, waistcoats and jackets from them for one fit model and see exactly what you got from those period references. It was really enlightening. It gave students the opportunity to learn to look at the pattern shape and see the silhouette of the resulting garment.

The books were: The Blue Book of Men's Tailoring, The "Climax" System for cutting Gentlemen's garments, The Modern Tailor Outfitter and Clothier, The Modern Mitchell System of Men's Designing, and Metric Pattern Cutting for Menswear.
Apologies for my bad photography! I had a really bad day.
Posted by Terri at 11:11 AM No comments: 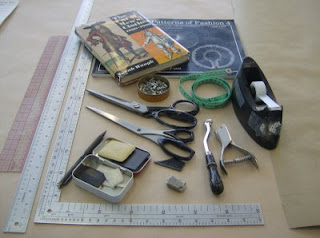 My favourite local bookseller Fanfare Books, is getting ten copies of Patterns of Fashion in for us!
Shop Local!
Reference Books could be an interesting topic! A future post on reference books is in order. What are your favourites for cutting or research?
Posted by Terri at 7:52 PM No comments:

I'm sure that most people think about blogging for a while before actually taking the plunge and I guess that I am no different than most. I have started reading blogs only recently and I started searching for fellow costumers or pattern makers online with little success until recently. 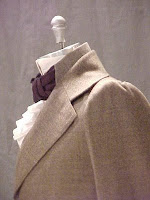 Tailoring does not seem to be as highly represented (nor as glamorous to some) as women's wear, but many people have expressed interest and fascination over the years in how we make costumes for the stage and how the whole process works. So, I think it may be fun (hopefully) educational (probably for me) and interesting (for you) to see how it all happens. I'm interested in discussing the technical aspects of pattern making, showcase the wide variety of garments past and present that have challenged me and I may even let a little bit of the glamorous women's costuming sneak in here from time to time, just to add a little sparkle. 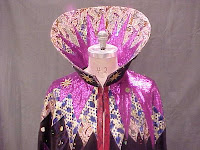 I hope I'll be able to keep up with posting, given that it gets pretty crazy around here, and in embarking on this path I'm sure that I have a steep learning curve ahead of me, so please bear with me! 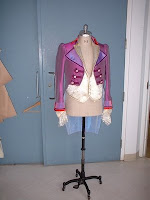 I should mention that although I work in a prominent theatre, this blog is just my opinion, and my thoughts on my process and I am not necessarily reflecting or representing any thoughts or policies of my employer.
Terri