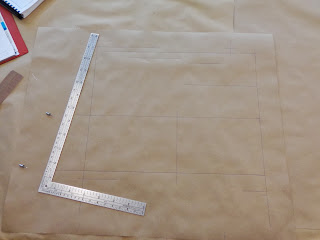 We had a late addition to my workload, so I headed in to work this morning to do some drafting.
I get so much done when I am alone in the room.
No interruptions!
I started the trouser pattern late yesterday afternoon, and finished it up before I started in on the waistcoat and jacket pattern. 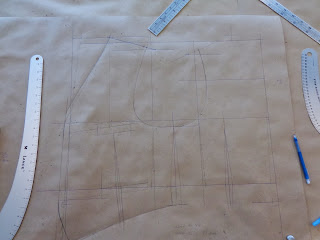 I started with my basic grid set up, and draft to the measurements I have- then I modify where I think it is needed. In this case I am dealing with an eight inch chest to waist drop and a drop of five inches waist to hip. So a bigger broader chest and slim hip size. I made a little modification in the back   length as well splitting  the back and opening it up for a bit of a forward head/neck. 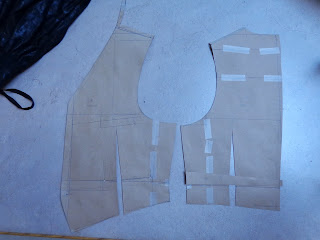 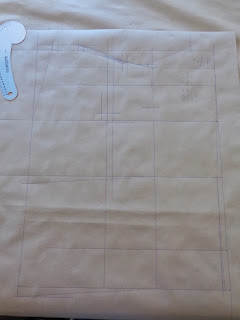 The jacket starts with my grid set up as well- and I made a mistake  in my set up, forgetting in a moment of thinking too fast that I had added seam allowance. So something looked odd.  I say it over and over to other cutter's apprentices and stitchers that if something looks wrong it probably is,  so stop and retrace your steps.
I was drafting in pen to try to make it visible in photos, so you get to see the mess I made! 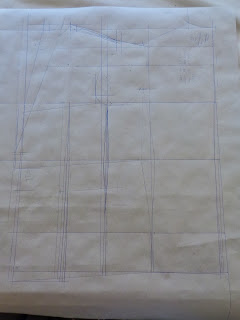 A bit further into the process, I think on paper, at this stage I change my mind and the lines as I make adjustments on the fly. 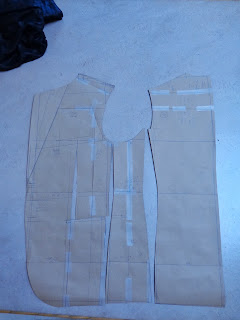 I made a further adjustment after getting the pattern cut out, I needed to create a bit more breadth in the upper chest area only.
I had to leave at noon, so I left it to percolate around in my head for the rest of the week end. The fabric should arrive Tuesday morning and I need to put the scissors to it right away.

Sorry about the photo quality, had to be quick about it all and of course the camera battery chose today to run low!

Not only suits being made 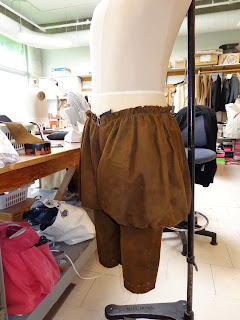 Well, things have been very busy at work and we are not just making suits, we have some period costumes to put together or refurbish from stock.
These are some of the costumes we've been working on.
A pair of suede trunk-hose. These are built on a fitted under base of twill. This year we are trying a few new techniques for putting these together. The lower leg or canion of suede is flat mounted onto the twill pieces before the legs are put together.   We constructed the fly completely into the under trouser, which allows us to construct the upper suede pouf separately. The pouf is attached to the thigh first, then brought up and attached to the waistline before the waist band is sewn on.
The centre front opening in the suede is faced back to the fly notch with a cotton twill tape, and that will then be slip stitched to the fly opening of the under trouser at the end. We figured that by doing it this way, we can remove the pouf if required, make changes to its size, add under structure if needs be without too much trouble. So far so good.
We are also making a doublet that has suede sleeves. These are in cowhide and have decorative ridges sewn down the top and under sleeve. We were able to create a similar look on the seams themselves by stitching a regular seam , pushing all the seam allowance to one side then top stitching a quarter of an inch away- like flat felling- then opening up the original stitch line so creating a similar ridge effect. Luckily we have access to boots and shoemakers and their equipment, because the last seam had to be done on the post bed machine. It makes top stitching inside the tube of the sleeve possible. 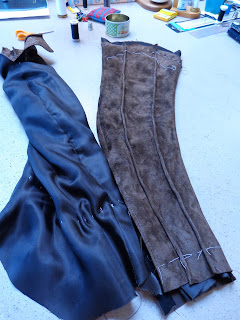 Lastly, what is a season without a large robe? It seems I get one every year. Last year was the velvet robe completely lined in fur. This year we have a large scale silk damask, lined in silk duppioni. What isn't in the photos is the waist length capelet of the same fabric lined in....you guessed it, fur.

It is time consuming and sometimes stressful cutting out these large garments. Often I have made a pattern and done a toile fitting without knowing what the fabric will be. So without knowing the fabric width or the size of the repeat, I often have to alter the pattern to fit the yardage I get.

Anyway, I guessed pretty close as I didn't have to modify the pattern, but it takes a good amount of time to lay out the pieces and make sure that the pattern placement overall is good and the pattern matches at the sides, and that you will have enough yardage overall. Garments like this have to be cut in a one way layout as there is a definite up and down to the pattern. This produces a lot of waste as you cannot top and tail the layout. I also lose a half vertical repeat when I cut the yardage so I can lay the fabric right sides together to cut. This fabric is meant for drapery so it is woven with a half of the pattern ending right at the selvedge edge. I prefer to not use the selvedge as my seam allowance, so I lose then lose a half repeat horizontally, as I lay the centre front and centre back in the middle of the next pattern repeat from the edge. Hope that makes sense....... 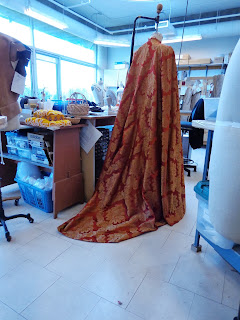 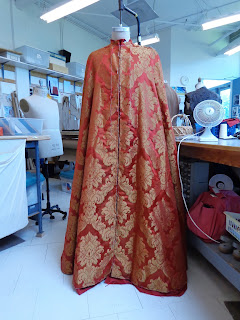 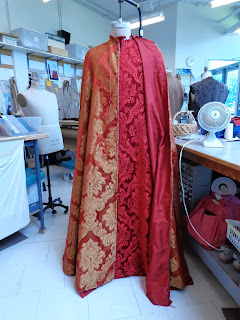 Under the cape is an under gown of red velvet brocade with a really nice hand. It is a little bit tricky sewing it together and trying to match the pattern as the velvet pile comes and goes along the seam. I think it is easier to sew plain velvet.
The trick according to Denise is triple rows of pinning. One row of pinning on the sewing line and a row either side to prevent shifting. Oh, and using the narrow velvet foot on the machine. Even then it can be a challenge!


This will be fit tomorrow, so I will try to get a photo of it all together next time. 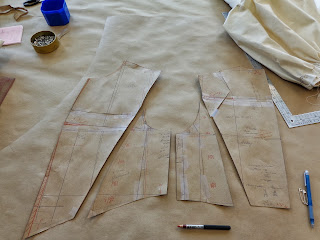 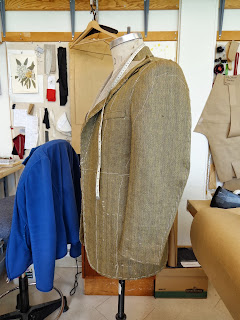 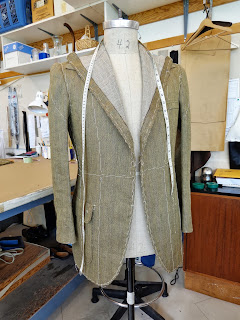 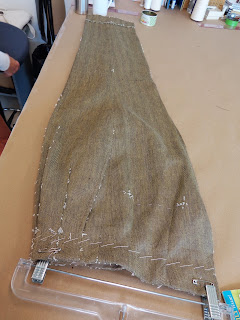