a man in wolf's clothing?

It has been quite hectic here with all that is going on. I think I say this a lot don't I?
I mentioned in a reply to a comment that everything is happening April 30th!
We need to assist our daughter to move out of her university digs and into a sublet in the city she is in, and I have a tech dress rehearsal on the 30th too. I guess my studio is moving on May 1st, and therefore my dear husband is on his own for the big city/daughter move. Whew!

I believe that I have been able to secure a new spot for my studio -knock on wood- but I am waiting for confirmation and a few more small details to be worked out. It is a relief, and just in time because I have more than enough stress with work and life in general.
I still need to hire a truck and finish packing up in preparation. I will also need to do some painting and flooring work before I can set things up, so I don't think I will be set up and functioning right away. Oh well, at least there is a light on the horizon.

So I actually have two shows going into tech in three weeks, one on the 28th and the other on the 30th. Then I have a small window to get a show together for the mid May period. The pace is not going to get slower for a while yet.

Here's one of two costumes that I fit yesterday, which I am quite happy with. This is an example of what I term "there is no formula" for doing the work we do. Trial and error  experience and adaptation. Or flying by the seat of your pants way of working!

This is the wolf. 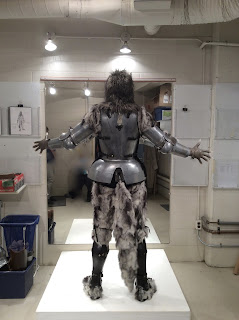 This has been in limbo for a few weeks while we were backed up with other priorities. The tail was ready though! There was a lot of pattern making to do for this costume.

The base layer to this costume is a stretch legging and a long sleeved stretch top that zips up the front.
I think it should have been a unitard and it may still get joined together but for now it is two pieces.
Pattern number one and two- actually, I had to redo the patterns as I was given a fabric to use that had a different stretch factor, but there wasn't enough of it in the end to make the whole costume. So ditch those patterns, get new fabric, recalculate the stretch and make new patterns!

We also needed a pattern for the basque that supports the tail. That pattern I developed from a skirt draft. ( I am not actually following a specific draft, merely the concept of it here).

The next set of pattern making involved the fur layer.
The fur does not stretch. We have a few hanging stands in the wardrobe, but the one with a good size for the torso has legs only to above the knee, and the stands with full legs have short stocky bodies.  I decided to trust my flat pattern making skills to figure it out rather than draping something on a stand.

I then needed to draft for the fur layer and figure out how it could be manipulated to fit closely in the body and allow the actor full movement. He demonstrated some of the fight choreography (full lunges in armour) in the first fitting, so that informed my subsequent thinking.

The fur on the wolf's tail was applied in sections to allow movement, and I applied the same principle to the leg area.
I drafted up a trouser pattern outline, and then modified it to be closer fitting, then I figured out the areas of overlap. 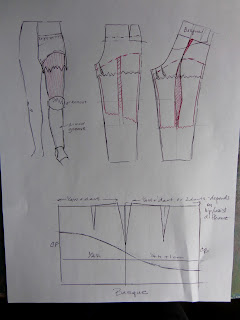 My actual pattern is so marked up with thinking lines that I drew a little diagram of what I did.

I didn't need to cover the areas of the body that are covered with armour, such as the lower legs which have greaves, and a knee piece - what are they called?   Poleyns, I believe.

The thigh area fur is cut in four pieces. It is seamed up the back of the leg and shaped to follow the contours of the thigh and buttocks. It has an inseam and outseam, and a seam up the front of the leg where I left adjustment room- extra seam allowance.

The over layer is like a pair of short shorts.
I reduced the girth a bit as I am working off a trouser draft, which is too roomy in general. I also darted out from the CF and CB lines to the hem of the shorts in order to get a closer fit there.

The basque was made of duck and corseting and is heavily boned with spiral steels in order to support the escutcheon for the tail. 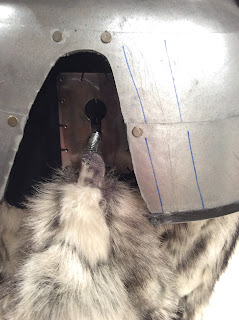 We found out that we need to shorten the spring inside the tail as you can see! Move the escutcheon piece upwards as well.
The escutcheon piece has holes drilled in it so it can be sewn on. It needs to have some kind of keeper as well, because the tail is very bouncy and popped out of the holder. Well that is what the fittings are for- figuring stuff out- what works and what doesn't.
We will then cover the basque with fur.

In the course of talking this through with Susy- who put it all together, we found that we could sew an elastic to the edge of the fur, and use that elastic as a means to attach the fur to the leggings. That means the thigh piece can be a little bigger than the thigh measurement, we can ease the fur to the elastic, and when it is attached there is still some give for muscle expansion.

The same principle with the shorts- the lowered waist can be eased onto elastic then attached to the stretch legging. This leaves the fur shorts free to move independently from the fur on the thigh. and also still be a pull on garment.
I had a lucky guess in how nicely the pieces worked together. The fur is bulky so the over layer needs to be bigger than you might think, and all our layers worked well together. you couldn't tell they were actually two pieces.

We did a similar process with the chest and armhole and sleeves. The fur elbow to upper bicep in one piece, the fur upper sleeve attached to the fur armhole facings/chest area, but left loose over the upper arm piece.
We will leave the armholes and sleeve of the stretch and fur separate so the fur pieces just float over the stretch. That should allow the most freedom of movement-  I hope it does anyway. Seemed good on the day anyway.

The other fitting was for a suit- which I guess i will talk about later as this post has gone on and taken me most of the day to get together.


also
Goodbye to our friend, Paul "eggs" Benedict, sound engineer extraordinaire, and all around lovely person.
2016 has been difficult- losing so many people we have had in our lives.