Ahh, this post will be a bit rambling! I feel quite tired!

What have I been up to lately?

Well it seems formal wear has figured prominently this fall. I had a call from a friend who was working on a tv show, and they needed a tailsuit in about two weeks, could I do it?

I already had commited to making some skating costumes but I did not have designs or fabrics yet  and you know what happens once you say yes to one thing, then all the other things suddenly start to happen!

So I said yes and the fabric arrived two days later. I started patternmaking, then cutting and then we made up a period tailsuit - waistcoat, trousers and coat, using very inadequate measurements, no fitting and crossed fingers.
Rush job number one!
Of course part way into the process, I received designs and fabric and the deadline info for the skating costumes. Yikes!
These had to have a fitting- just time for one fitting mind you- and the only time that everyone was able to be together- skaters, myself, and the designer, only left us a window of 5 days to finish and deliver.
That was rush job number two.

It had its share of challenges stretch fabrics for a tuxedo, non stretch for a sweater like garment....which I hope to get time and inclination to organize my thoughts so I can post about it!

A big sigh of relief when I received messages that everything was great and off they went to compete, and they won! Hurray!
Three days later I get an SOS message, and it turns out they needed to change their program completely and they had two weeks to pick new music, do new choreography and have new costumes made. Could I do it?
What can you say?  How terrible for them to be put in such a position!  I said yes.
So the change was to a tailsuit, with a nod to the Edwardian era, and with a bit of ambassadorial splendor.
So trousers, waistcoat, bow tie, order and medal, sash and a tailcoat. The fabric arrived Friday morning. I cut all day Friday, we sewed Saturday, fit it on Sunday and finished it on the Friday.  They tried it on ice on Sunday, and flew to their next competition Tuesday.
Rush job number three.
Oh, they won by the way! yay!

Then I got sick. Of course- too much stress and your body kicks you when you are down.

I leave tomorrow to work for a month in Montreal.
Four weeks to cut and make a show- which compared to what I have been doing, seems like "bloody luxury" as we say -but I am sure it will have it moments of being a rush job too.

Here's a photo or two for good measure. They were taken from their tumbler site. No photos of the tails for the tv show- I don't know if it has aired yet.... 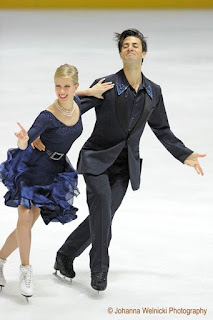 These two - Andrew Poje and Kaitlyn Weaver are just wonderful - as athletes and as people- they are as lovely as they look. 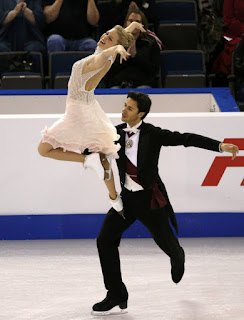