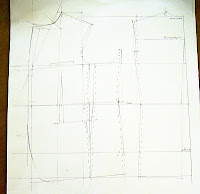 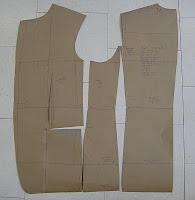 I spent a couple of hours the other day writing out the German draft in English, which really helped me get a better feel of the system. I made a quarter scale draft as I wrote and yesterday, I went back to it in full scale on brown paper.
It was a much smoother and quicker process this time.
There were a few areas I had concerns about and I noted them on the pattern. I didn't change them at this point because I just wanted to follow the draft as written just to see how it turned out.

I cut a half muslin, stitched it up and pinned it on the stand.
I know the inside out seam allowances are distracting but please bear with me. The front doesn't look too bad, I stretched the front neck point a bit just by hand and I pinned in a modest 1 cm thick shoulder pad.
Concerns:
I pinched out 1.5 cm in the front skirt as directed which opens up the pocket dart- maybe 1cm pinch would have been enough, as I think the hem felt a bit cupped.
The hip width determination in the draft- The measurement of my stand made the side hip narrower, and perhaps it is a case of "if the hip is smaller than "X" use the larger proportion". The narrower hip made the centre back line pull away from hanging straight. I released it about 1/2" at the hem and pinned it where it wanted to sit and it was improved.
The shoulder seams have .75 cm seam allowance. When the necklines are drawn as indicated, there is gain in the shoulder length and shortness in the back neckline unless the curved lines are terminated .75 cm from the points on the draft. Kind of hard to describe in words. It's not a lot but it sat better when I changed it.
The only other concern I had was the obvious width of the back. I was strictly using the proportional formula given 2/10 of chest plus 1 cm rather than a direct measure. That back is 4 cm wider than the "body" in total, which seems excessive to me.
The overall body ease at the chest level was 5 1/2" which is much more than I normally get using my own drafting system.
The armhole circumference looks ok and the armhole depth isn't too low.
I think I will draft a collar and sleeve and maybe the other half of the body, and then see what it looks like.
I think this draft is from the 1950's/1960's but I'm not sure. There is little waist shaping and narrow hips so that fits with that silhouette.
I also have a photocopy of another German drafting book which I think is earlier and the draft is slightly different, so if I have time I'll try that too.
Posted by Terri at 10:05 AM