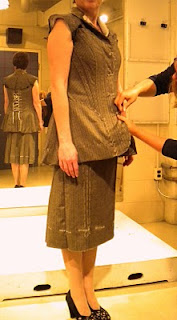 More camera issues- my batteries were dead the day that I had my first fitting of the "corset" I am modeling at the upcoming Creative Festival in Toronto. The only person with a camera handy was Linda from Farthingales (the driving force behind the project) who snapped this one as Jennie was just pinning me into the jacket.
I was expecting to be fit in a toile, but Jennie was daring and had cut right into the fabric for both the skirt and the jacket. I don't have a picture of the sketch to show you, but you can see the corset boning details and that she has cut some of the panels of the jacket and the skirt on the bias. The skirt will be getting some kind of detailing at the hem as far as I can remember. There will be sleeves. Honest.
The jacket will fasten at the front with regular buttons and holes and the lacing will be in the back. It was much too big in the waist, even after the lacing was drawn as tightly as possible, so I think she will be taking at least three more inches out there.
I will have to inspect it more closely next week at my next fitting as I'd like to have a better look at the way she is dealing with the transition between the laced section at the back and the upper portion with the collar.
I had a momentary Cinderella moment when she brought out the vintage shoes a half size smaller than what I normally take. They were beautiful and I squeezed into them without removing any toes!
This week-end I believe there is a meeting with the milliner who will create a hat to go with the look, and one of the theatrical jewellers has also made some jewellery crafted something to go along with it.
I saw some of the other corset projects that people were building and they range from true period corsets to very modern interpretations. Linda is showing the progress of a few here.
Posted by Terri at 8:22 PM