18th Century costume getting to the fitting stage

Getting to the fitting stage.

I was going to get one fitting for this costume.

Seven years ago I made mock ups for the first fitting because a lot of decisions get made at that stage, ones I could not anticipate, and it is much easier to correct for fit and allow for design decisions when you aren't cutting into expensive fabric.

Mock ups save time- mostly in sewing time, because putting together a mock up in a cheap muslin means you can prepare it faster.  If you cut something in the real fabric for a first fitting, you need to mark everything carefully, allow inlays in areas where you may anticipate changes for fit, and sew it together so that you can take it apart after the fitting.  All of the interior structure needs to go into the garment right away as well. For instance, in a mock up I might just apply some fusible to the fronts of the coat, but for this coat, the chest canvas was basted in as well as all the interfacing to support the full skirts of the period. In the fitting, you also need to know where and how to adjust for fit, and mark changes with chalk and pins (rather than sharpie on muslin). In a mock up I might feel more free to clip into certain areas or keep seam allowances narrow, but in the real fabric, you have to be much more careful.

What mock ups don't do is allow the designer or director a chance to see the real fabric in action early on. With only one fitting, cutting into the fabric was going to give the director a better idea of what the final costume would look like.

So, one other thing to consider in saving sewing prep time with a mock up - you can get to the fitting stage faster - but you do then have to allow time as the cutter to alter your patterns and cut everything in the fashion fabric after the fitting.

With two weeks from fitting to delivery, I didn't feel there wasn't enough time to make that happen.

So I cut right into the real fabric for all of the pieces. Shirt, waistcoat, coat and breeches/tights. I passed off the shirt to a colleague to prepare, I sewed the waistcoat shell and breeches/tights and another colleague put the coat together for the fitting. It did help that I had a handle on the design, and from what I could tell, the measurements didn't indicate any big challenges, but still, it felt a little daunting to go out on that limb.

All that being said, the first thing I looked at was the fabric itself. The coat fabric was a pretty brocade lamé without much substance. The waistcoat fabric had a bit more heft but it was unstable, the shirting was a somewhat sheer poly chiffon type fabric. The fabric for the breeches was a stretch velvet. 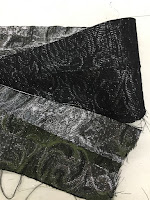 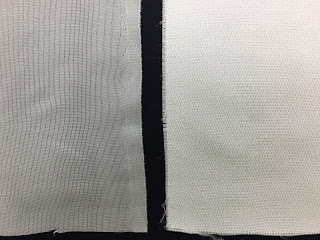 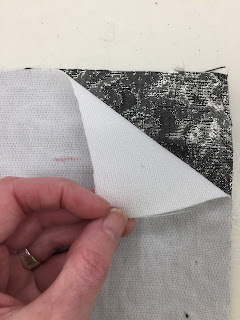 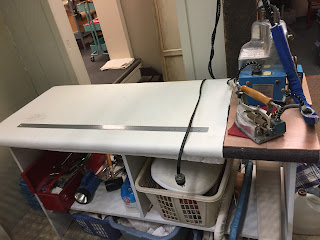 The iron and table set up I use. This is an older Sheldon steam boiler and iron. It will give me 30 psi of steam when it heats up fully. I should know what the temp of the iron head is at but I don't so I  will put that on my to do list!

The coat fabric had a paisley woven design and to block fuse this meant I had to set myself up at my iron with a metre stick and square so I could keep the fabric squared up while fusing. My iron table is 24 inches by 62 inches, minus space for the boiler so I could only fuse just over half the width of the fabric as I went.

First, press the coat fabric - all 8.5 metres of it and test for shrinkage. Then assess how much you need to fuse; I fused 6.5 metres. Cut the fusible, making sure it is on grain.  Set up at the iron table, with the fabric at your feet, the fusible carefully folded and ready to be laid on top. Bring the fabric it up onto the table,  square up the pattern in the fabric up with the metre stick and square, lay the fusible in place and fuse a section. Shift the fabric forward, do it all again, aligning the grain as you go. I tried to be thorough, but I knew that I just needed to stabilize it as best as I could and if there were areas that needed a bit more attention with the iron I could do that after the pieces were cut out.

But finally the fabric is ready to be cut!