I need to get back to my posts about making my coat and my thoughts on pattern drafting for women. but I am ignoring that right now and talking about something new.

I received a call mid summer by the designer asking me if I could reproduce an 18th century costume I had cut way back in 2014. It was to be for a filmed version of a new Opera piece. The AD loved the costumes we had made and wanted a new version for another singer.

Of course I could! (confident that I still had the patterns handy, because I keep a lot of my old patterns.)  In the cold light of the next day, I went looking for those patterns only to find out that during my covid cleanup at the studio, I had thrown out those seven year old patterns, because I figured I wasn't going to need them again.

Isn't that always the way?

I proceeded to redraft, to the new singer's measurements: luckily they provided me with the originals to look at so I could jog my memory, and meanwhile the designer went shopping. 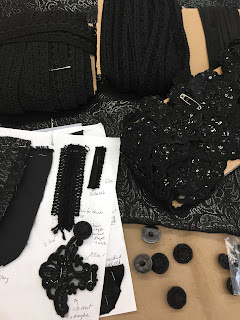 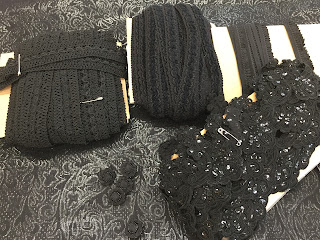 It was like Christmas unpacking all the bags of lovely fabric and trim and buttons. He had made me a bit of a map as well, which was essential as we were not going to be able to work in person on this.
I was in one place and he was going to be eight hours away working on another project.
The other complicating factor was time, as rehearsals didn't start until September 7 and delivery needed to be by the 22nd.
This only left a two week window after the fitting to get it all done. I know that sounds like a lot of time, but for an 18th century costume, it is not a lot of time. Luckily I had a couple people on board with me to help out.
first step- drafting patterns
second step- prepping fabrics and getting everything cut out ( right into the real fabric!)
third step - putting it all together for the first and only fitting.
More to come.....
Posted by Terri at 4:25 PM