As I mentioned in my last post, I though it might be interesting to walk you through the process of drafting a pair of men's trousers from a published draft.
In preparation for this, and in my previous teaching, I like to point out that trouser pattern shapes have changed quite a lot over the years, as I hope you can see from this selection of patterns I have scanned. All of them will produce a pair of trousers but with different silhouettes.
One of the things I have done with the apprentices I have trained is draft these old patterns and make them up so you can really see the differences in the final shape. We won't be doing that here, but in order to recreate the silhouette of the period, you need to understand how the patterns work.
For most theatrical tailors, once you understand the mechanics, you put them to use by developing your own drafts rather than trying to use the 1980's Metric Pattern Cutting draft to make mid Victorian trousers. 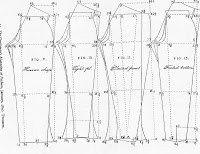 These are c.1850 from The Cut of Men's Clothes by Norah Waugh 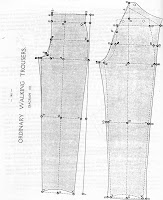 This is c. 1920 from The Climax System for cutting gentlemen's garments. 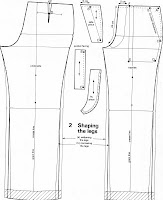 Metric Pattern Cutting for Menswear by Winnifred Aldrich 4th ed c.1997 but I think the draft is the same as it was in the 1980 version.
So, if you are deciding which draft to use keep in mind what you want the finished product to look like. Don't use a 1940's draft if you want low-rise modern fitting trousers. You will just make youself frustrated.
Next, I'll give you a list of tools needed to draft a pattern and the draft I have chosen to use. Feel free to draft along and ask questions. I've done it so often that it is easy to forget that others have not, so I hope this will make sense.
I'll probably draft in both full and 1/4 scale because it is easier to scan a page than take good pictures of a fullsize pattern.
Posted by Terri at 8:31 PM