Terminology
Before you start drafting, it is a good idea to make sure you understand some terminology.
Lets begin at the beginning.
Waist: the waist measurement given - in this case 32 inches
Seat: (hip) is the hip measurement given - 38 inches
Sideseam: also known as the outseam -44 inches
Leg: also known as the inseam- 31 inches
Knee: which is the measurement of the desired trouser size at the knee- not the persons actual knee, is given as 20 inches.
Bottom: which is the desired hem circumference, not the person's bottom!
is given as 16 1/2 inches.
Scale: one half of the seat measure, so that is 19 inches.
You use scale, or half of a particular measure in drafting for a few reasons.
One: the pattern generally represents half of the body.
Two: many systems of drafting use proportions of a measurement in
determining other areas of the pattern
*you may also see scale written as "on the square"*
Scale, or "on the square" refers to the tailor's square, which is used in drafting. The divisions marked on the tailors square are divisions based on one half of a body measurement.
So for a hip of 40 inches, you would use 20 inches in the draft. If you need to find 1/3 of the scale, you would find the thirds divisions and then look for the number 20 within that area. From the corner of the square to that mark measures 1/3 of 20 inches, or 6 2/3 inches.
The square is a calculator which is especially helpful if you draft in imperial. If you don't have a tailor's square I recommend drafting in metric, using a calculator.
Rise: this is the difference between the inseam and outseam.
This distance can be a measurement or a proportional calculation. The number is greater for trousers designed to be worn at the natural waist and lesser for trousers designed to be worn just above the hip bones.
Dress: an allowance of extra room in the crotch on the pattern for, how shall I put it, the male anatomy. Usually from the era when boxers were the usual underwear, before the advent of briefs and underwear that holds everything closer to the body.
One side of the trouser pattern is larger and that seam line must be shrunk or eased in to match the other, shorter seam line creating a kind of pouched effect. There is varying debate on the amount of "dress" that should be cut in, but modern trouser patterns have generally eliminated it.
Other terms that may be encountered:
Fork: that is the area on the pattern that extends between the legs. In making up trousers, you may see reference to a "fork stay" which is a folded piece of silesia laid in place in the curved area of the crotch.
Fish: another word for a dart- sometimes a double ended dart. In older texts you may read, "take out a fish" in the back.
P.T.U.: permanent turn ups, also known as Cuffs
Nett: means without seam allowance, in other words, on the line. Think of your "gross" pay and your "net" pay- net has had the deductions made.
Spring: a flaring out of a line
Grown-on: part of the pattern as a whole- not sewn on.
Disproportion: measurements that are not the "ideal". Usually, it is the difference between the ideal measurements and the ones you have to work with.
Undersides: back of the trouser pattern
Topsides: front of the trouser pattern
Sweep: to take your measuring tape, fix one end at a certain point, measure to another point and then use that distance like the radius of a circle to sweep or draw an arc.
Whew, I got carried away! I'm sure there are more I haven't thought of.
Not all these words are used in this draft but if you are using old drafting methods you will run across them, guaranteed! 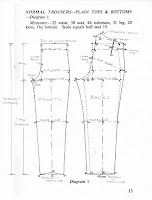 Read through the drafting instructions before you start and figure out if there are things you aren't sure of.
Posted by Terri at 3:07 PM