waistcoats on the bias

I am making some suits for a show and the designer has designed the waistcoats to be cut on the bias.
OK, I think- or rather I didn't really think about it much at first- no problem.

I know it isn't really an impossible task, but it is time consuming and it is always hard to judge how much more time consuming until you are in the midst of it.... So lets break it down.

The basics:
Firstly- the design is a 1930's double breasted waistcoat with a laid on collar/lapel.
The cloth is a windowpane check. White on black. The windowpanes are rectangles not square.

Challenge: the true bias on a pattern with rectangles gives no happy visual location for the CF line.
Solution: draw a line through the corners of the rectangles and use that as a CF line, so it is not on the true bias.

Challenge: a traditional vertical dart in front will not be a good choice as it will distort the look of the "bias"
Solution: close out the front dart and transfer it to the neckline where it will eventually be covered by the collar.

Challenge: which grain to cut the collar? With the neckline dart, the laid on collar will never be able to match the fabric of the body. It can only match up to the dart, the worry is that it will just look like a mistake.
Solution: cut the collar/lapel so it is a contrast grain so the windowpane contrasts with the body- make a detail out of it.

Challenge: applying the fusible to the wool, making sure the right and left fronts are mirror images. dealing with shrinkage that comes with fusing.
Solution: Use a fusible that is somewhat translucent so I can see the windowpanes through it.
Draw out the pattern pieces on the fusible giving a clear CF line.
Block out the fabric in a single layer at the ironing table using a metre stick and a square, so the windowpanes stay square and true.
Chalk the pattern pieces onto the wool. including a clear CF placement line.
Apply the fusible to the wool carefully maintaining the alignment of CFs and overall placement.
Fuse one front, re block wool, chalk other front, and repeat making sure the alignment of the other front is a mirror image of the first.

At this point, the pieces are rough cut and I have to take them back to the table and check and redraw the pattern, because fusing always shrinks slightly.

Do the same process for the lapel/collar pieces.

Repeat for the second vest which must match the first. 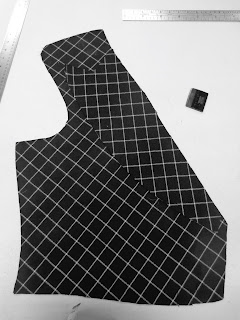 This is the idea, partially done and placed roughly in position. We are going to put the welt pockets on the straight grain to match the lapels.

I think it will look very striking once it is finished, but oh boy it took a lot of time to get them cut out!
Posted by Terri at 10:20 PM