I first met Desmond Heeley in 1986. I was a new stitcher, and I was in my third professional job contract, working at The National Ballet of Canada on his production of the Merry Widow.
I was gathering strips of different colour fabrics for the underskirts of the Can Can dancers. Miles of them, tying off the gathering thread on the door knob of the wardrobe workroom and standing at the other end of the long hallway, pulling, ruching.
Anyway, one evening after my cutter and I had worked some overtime, we exited the building at the same time as Desmond, and him, desiring some company, gathered the both of us up and took us to dinner next door at a very expensive restaurant. I sat there completely out of my element, enthralled and quite speechless at finding myself in this position.
I realized yesterday at his memorial that he was the age I am now when we first met -isn't that funny- and I had no idea at that time that he would have a great influence on my future development as a cutter and that I would have the very great fortune of knowing him just a little.

There have been so many people that he worked with in the early days and became his "family" and so many stories told by him, told about him, stories of the development of theatre in this country, the crazy things they did for the love of their craft and of each other. I wish, and not for the first time in my life, that I had been born a little earlier, to have been able to know some people a bit more fully.
He gathered people to him, and he treated you as if you were the most important person in the world to him, his letters were the most vividly described, his interest and emotion so genuine.

I discovered quite by accident his mentor, Oliver Messel, when I read an article in an architectural magazine about homes built on the island of Mustique by a man who had been a theatre designer- and the accompanying images made me think of Desmond. When I asked him about it he told me that Messel was indeed his mentor, and later sent me, in a letter, a photocopy of a design of a spray of roses by Rex Whistler for the ballet Spectre of the Roses (Sadlers Wells) - just before WWII- great hero of mine, killed on the last day. a postscript to check him out online and another notation * He, Tanya & Oliver Messel my idols.

We shared a a love of Gilbert and Sullivan and Desmond sent me a few things over the years- a little book he found, a postcard, but by far the most amazing and generous was a sketch he made of the Fairy Queen in Iolanthe for the G&S society in New York and I am going to transcribe the exuberant handwritten note that came with it.

p.s. Am not quite sure that this is the sort of sketch one hangs  BUT I thought it might make you smile- (and help G&S along) -
In the '60's I designed Iolanthe for Sadlers Wells opera- the first production away from the copyright (much concern from the diehards!) and a few sniffy folks at the Opera who thought that G&S was beneath them.
it was a huge success---this costume for the Fairy Queen was for a lady- named Heather Beggs- almost  six feet tall--glorious voice & great style--at the end of the piece, "Up in the air sky high--" we actually flew her in a chariot made of Giant roses & pulled by two vast butterflies!---- two baby paniers spangled crin overskirt, (silver & gold brocade under!)-- the "ermine" was swansdown with black coque feathers----and the centre panel "chunky" leaves, roses, with a gauze layer on top!----
This sketch is a recreation done for the G&S Society here in NY

signed with a heart with an arrow through it,
Des 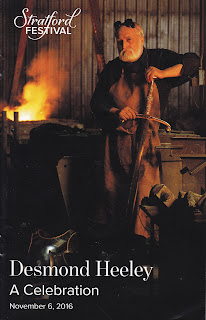