I recently needed to produce a few garments for a child, and it occured to me that I had only one drafting book to reference for children's wear.

That book is the Winnifred Aldrich's  Metric Pattern Cutting for Children's Wear and Babywear.

I have an older edition so out of curiosity I borrowed a newer edition just in case. I found there were  some changes to some of the basic drafts which made me wonder.

Things like the calculations for neck width used 1/5 neck minus 2mm now its 1/5 neck plus 2 mm on some drafts.Were there errors in the older drafts or just typos? Strange.

I wanted to find a draft for a one piece snowsuit. It is not a garment covered in the Aldrich book. The child would arrive after quarantining, go for fittings, alterations would be done there, and then be on camera two days later.   They didn't want a waist seam in the snowsuit, so I had to get it right the first time. I needed to find basic torso girth measurements for children so I could have some kind of reference point. "It shouldn't be difficult" I thought to myself....... Anyway, it sent me down a rabbit hole of internet searching.

I did finally find a study of children's measurements here, done in 1939. So I waded through all of this and got a number range for height.

I called friends with children too! "how tall is your child? Can you take a measurement of his torso girth for me?"

What a run around for information! Oh I forgot to mention, all I received was height and a chest measurement taken by a parent. That is all I was working from. What a business! and let's not talk about the deadlines.

What else did I find? I found a snowsuit draft on a Russian website, which I downloaded for reference and I could follow along looking at the diagrams. My desktop translated the pages, except for the sizing tables!! because they are photos not text! Drat!

I was on Pinterest and I found an Italian children's cutting book. In Italian, of course. Again, I could follow along by "reading" the diagrams. But I don't think there was a one piece snowsuit draft there either. That book, by Antonio Donnanno is available here in English.

I decided to basically stick with the Aldrich using the flat overgarment blocks for jackets and the flat two piece trouser block, and melded them together so they looked right ot me.

Once I made the basic draft, one of the things I had to take into account was the thinsulate lining. My base pattern was for the lining, but the outer fabric layer needed to be bigger than the under layer. I think I read somewhere about re-calculating the draft for the amount and type of insulation being used, maybe it was on the russian drafting site, maybe on a german site....I can't remember now.

Anyway, in the end, I figured out how much bigger to make the shell and made a pattern for that too.

It was lots of work mentally and then a lot of work just cutting and sewing them. (yes, plural! I needed to cut two of them) I think they turned out really well, The best part is that they fit. I breathed a sigh of relief. 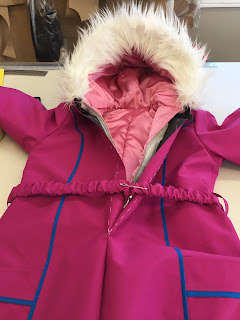 We did get stuck waiting for zippers to arrive, but all in all it went fairly well.
The shutdowns have made getting supplies a bit more challenging! So many things are being shipped its a miracle everything gets to where it is going.