I feel as though I blinked and suddenly we have gone from December to mid February in a flash!

I hate to keep saying the same thing but it has been really busy in my world.
I took on a project that was late in starting, but I felt that we could pull it off.
I had people in place, the fabrics arrived just before the Christmas holiday started, I made some patterns then I came down with the flu.
I put everyone off for a few days, while I lay in bed feverish. Once my fever broke, I dragged myself to the studio to cut so we could be prepared for fittings the next week. What a hellish thing the flu is.

Well now that project is over, I have been back at my main job for a month now- and I waved goodbye to that project on Saturday.


One more project to be delivered - a ballet costume-  and I will be down to a single job and I can't tell you how good that feels. 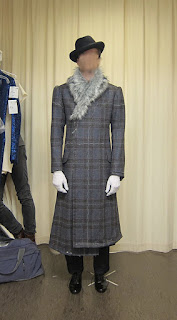 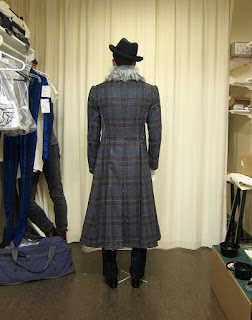 Here is my Ballet coat.
I sent it in with a colleague for a fitting as I was otherwise unavailable on that day. Little did I know that the dancer I cut it for was injured and another dancer showed up to be fit. Luckily, they were quite similar in size!
There were a few changes that the designer (Colin Richmond)made, as you can see- shortening the hem, lengthening the sleeves, and he took it in quite a bit through the body- I had cut it with a lot more ease and had the skirts flared from a higher position on the body. The roll line was moved up and the collar reduced in proportions.
He added fur cuffs and a back belt.
Generally though, not too bad for a first fit in fabric.

Now it is boxed up ready to be delivered! I hope I get to go in and see the dress rehearsal, the show looks amazing from the sketches I have seen and the promo videos. The ballet wardrobe is one of my favourite wardrobes and everyone there deserves huge credit for their beautiful work!!

Next up in my world are productions of Guys and Dolls and HMS Pinafore! Two musicals that I have a great fondness for. I also have a 12th night that I will be working on so that should keep me busy!
Hopefully I will find more time to blog about them than I have recently. 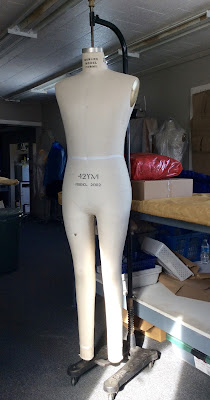 Oh!
I also added something useful to the studio....
I have been on the lookout for a larger sized male judy, and found one last week on an online sales site. I didn't really need a full body judy, but he is a beauty! The price was well within my range and I just couldn't pass it up. It is a 42 young men's size which is great as the torso is longer- more proportional- to someone 6 feet tall, which is so much better than the standard 5'8" models.

Back to work tomorrow.