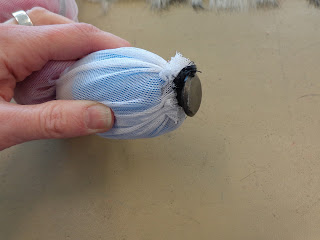 So here we are further along in the process of making the wolf's tail.

The props department has provided us with a way of attaching the tail to the body. The tail gets this metal button end that screwed into the spring.
This then will slot into a metal plate that looks just like a large escutcheon/ key hole. The metal plate has holes drilled into it so we can sew it to the basque. When we get to that point, I will take some photos of it. 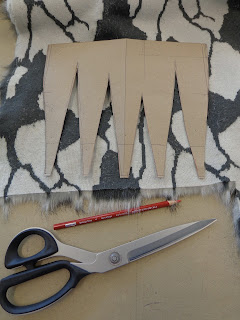 Before we get to that point we started to cover the tail with the fake fur.
Beginning at the end of the tail, I cut a piece to try out. The darts are cut on the lines and zigged together, then we tried it on the form, made some adjustments, and sewed it to the net fabric at the first segment.

The trick with cutting fake fur is to not cut the fur, just the backing fabric. I often use an exacto blade, or use just the tips of a very sharp pair of scissors. Wear a mask while cutting and sewing and have a sticky roller nearby so you can go home not covered in fibres!
Even with careful handling, the fibres get everywhere, just the same as glitter does! 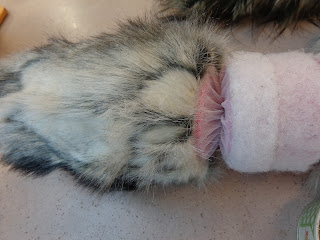 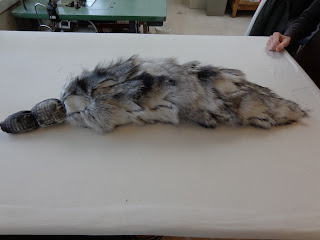 There is a separate piece of fake fur cut for each segment, to allow the segments to bend.
Each of these pieces overlaps the previous one, and needs to be loose enough to allow movement.
You cannot predetermine the segment sizes as overlapping the fake fur adds quite a lot of bulk. After conferring about the process, Silvia happily took on the task of figuring out the best size for each segment, and attaching them to the base.

The loose edges of each section are cut with jagged edges so there is a not a defined line between them.
Here you can see we have added a darker covering fabric close to the base of the tail where a lot of the bend will happen. If there was ever a glimpse underneath one of those layers, you will not see the white or pink of the structure.
We covered the tail up to the button, and are now waiting for a fitting of the costume base and the basque.

It is fun to have a chance to createsomething different every once in a while!