I think I am bored with the weekly pictures of my table, are you?
We will just continue on with some other items then shall we?

Trunkhose.
I leave it to you to look through the Internet to your heart's content for images.
a disclaimer: I am not in the business of pedantic historical reproduction. I am interpreting a designers vision in modern fabrics for a specific theatrical purpose.

Not my favourite garment to make.
You may think it is strange for someone who works in this milieu but there you have it- I confess to not enjoying making them. I think it is because I have never had the luxury of time to dissect what I am doing and why. They have turned out well enough in the past, but now I have to make some more and I am determined to document what I am doing and why, and maybe learn to love accept them.

First thing first- there are many ways of approaching and constructing them and I have made them in a number of different ways over the years. Luckily for me, I also have access to the past. I mean a costume warehouse of 60 years of costumes, so I can and sometimes have a critical look at what cutters did in the near and not so near past at work. 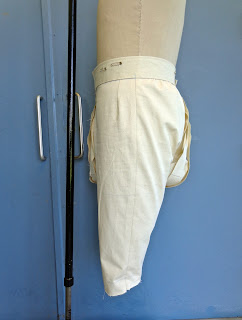 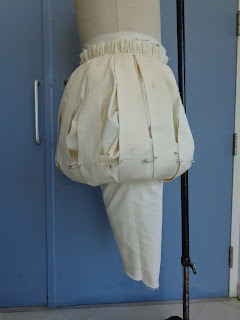 So the first thing I have been doing is to draft up a pair of breeches that will provide the base of support to build the trunkhose on.
Trunkhose for the theatre need support structures (most of the time) to maintain their shape and silhouette. The shape varies from shorty short Elizabethan trunkhose to round "pumpkin pants" to teardrop shaped fully padded versions, or just enormous unpaned slop styles.
The support they need is both vertical and horizontal. Vertical control keep the length of the outer layer in place. If you just made longer breeches and pushed them higher on the leg, you create a shape but what keeps it from slipping down to its former position?
Horizontal control of the silhouette is often needed to maintain the shape after the vertical length is controlled. What will help them hold their shape over the long term? If there is no support, over time and wearing and dry cleaning they tend to collapse and droop, and that may not be what you want to happen.

This is a rough start to the process in these photos.
In a perfect world, I would have a separate fitting for the under breech, but time is precious, so I generally mock up only one leg of the truck hose, allowing me to fit the under breech and give the designer a look at a rough silhouette of the trunkhose on the other leg.

I have a very large "comedy" pair of breeches to make as well as this paned version, so I will try to be diligent and document the process for each of them over the next few weeks.
Stay tuned.