Well, the cape has been finished, and as far as I know, it has successfully stayed on his shoulders without needing any other hidden means of support such as a harness Hurray! Not that he could have a harness, for in the end he must take it off himself onstage so the chain of office has a large hook and bar closure on one side, and he does quite well with getting it unfastened. Whew! 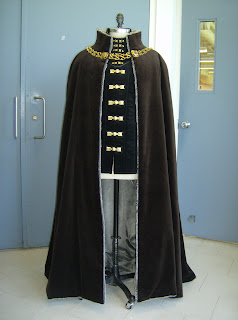 The back has a suede red cross and studding details. I wasn't aware of the cross as part of the design when I first cut this out, and I put a pleat in the back of the cape, but I think we've made the best of it.

The idea of applying trim to velvet is always tricky and tends to involve drawing straws to see who gets to do it as well as some deep breathing exercises. This suede actually wasn't as problematic as we thought it would be. Deep breathing always helps!
The suede cross needed to be hand sewn to the cape. Hand sewing a cut, raw edge of suede needs a bit of preparation.
I wanted to create stitching holes along the edges to make the hand sewing easier, and to reduce any possible distortion of the edge that would occur. I created the holes by stitching the edge with an unthreaded industrial machine with a large needle set at the longest stitch length.
I also found it helpful to mark the cut edge, create the stitching holes, then cut on the line. This allows the suede to feed evenly through the machine and eliminates any rippling that would occur if I had cut first.

The studs went in fairly easily. I just created a circle template of the correct diameter, and divided it up into 18 degree angles (I did mention to my daughter that geometry is used in real life) to mark the placement.
Susy had the idea to put a piece of Styrofoam in between the velvet and the fur, and that allowed the studs to press in through the velvet or suede, into the Styrofoam, and it was a simple thing then, to lift the velvet carefully and press the prongs of the studs back with pliers.
Done.
And so is my season here. Early this year, but I have some work coming up in August so now is the time to relax if I can in the 36 C degree weather we've been experiencing. No air conditioning either.
At least I can wear something lighter than this cape! 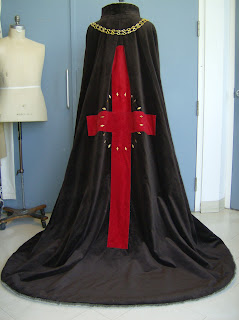