getting your money's worth

Well Happy New Year to everyone. I hope you had a nice holiday!
Now today I thought I should start to get back to work and I headed over to the studio to look at a pair of "breeches" that I was asked to reproduce.
A number of years ago Carol and I built costumes for this client. I built a cutaway coat, waistcoat and trousers and Carol built a lovely 1880's dress. These were well made and not cheaply done and I think the client had a bit of sticker shock initially, but they have used them for 7 years, and not even on the people they were built for. They have stood up to repeated wear and cleaning. So, I think they have had their moneys worth, as only the waistcoat has needed replacing after 7 years.
It turns out they had purchased other costumes which the "breeches" were a part of. Not sure when they were purchased, but it had something to do with a Napoleon costume.
I wasn't expecting what I saw when I opened the bag. 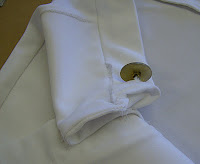 Ok you can call me a costume snob or whatever you like, but really, what a piece of crap.
This is Hallowe'en type costuming, and it pains me greatly to think that as a costumer, I may be lumped in with this kind of stuff.
My list of what's wrong:
1. They are made of cheap, see through polyester knit. I hope he had a coat that covered most of him.
2. They are badly sewn.
3. They are badly sewn even for what they are.
There is no stabilization in the front "fall" to prevent excess stretching at the waist.
The placket "points" haven't been turned at the point, they are just smushed. The placket points aren't even stitched down, no I lied, there is a handstitch on one placket holding only the inner layer of the placket to the front.
Look at the "waistband". The end hasn't been turned properly then the inner elastic has been twisted and caught when the button was stitched in place.
They were put together by serging and obviously the waistband and body didn't quite end up the same size.
There is no stabilization behind the buttons.
Even if you bash something out to make money, how can you send product out like this? It wouldn't take take much more to make them a whole lot better.
If you are getting costumes for your business, this is not getting your moneys worth, or wait, perhaps you do get what you pay for.
What a way to start the New Year!
Posted by Terri at 6:56 PM