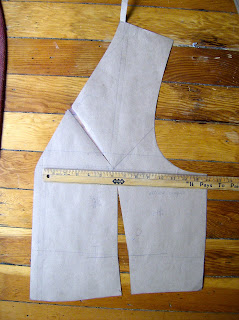 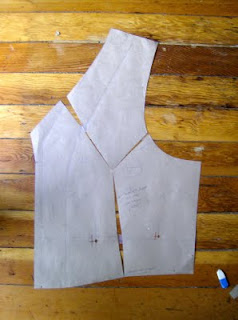 Most of the time I start out by making a pattern for a design without knowing what fabric will be used.
Usually it is not a big problem, but for some fabrics such as striped ones, you may want to change the dart position once you see the fabric.
It is best to not interrupt the stripes by having an angled dart for instance- so you may want to reposition the dart to be straighter or possibly place it in between a prominent stripe, to minimize the disruption of the stripes.
In the case of this waistcoat, the fabric turned out to be a taffeta, and it had a 5cm wide stripe pattern in black and mauve.
The best choice then was to eliminate the visible dart altogether.
I moved the vertical chest dart by closing it and transferring the dart to another position in the garment. Here it is in the neckline, (where I had already placed a bit of easing), with a small amount in the armhole.
You can see that I have made the dart shorter than the slash, so I have gained a bit in the chest, but that is negligible. There is also a slight gain in the waist because the vertical dart isn't completely edge to edge, but again, in this instance that small amount extra was not an issue.
The amount in the armhole can be eased in a bit or left as is since it is a small amount.
In the end this worked to show an uninterrupted waistcoat front, and all the shaping is hidden from view.
Posted by Terri at 9:15 PM