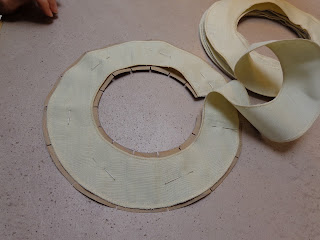 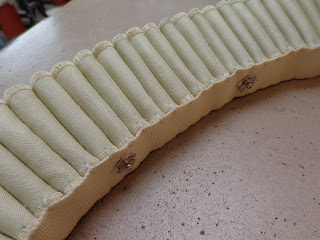 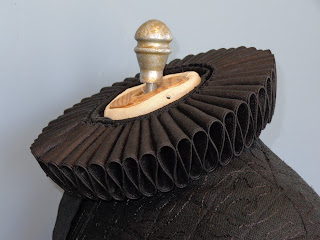 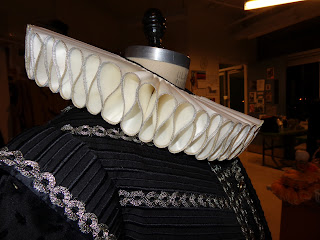 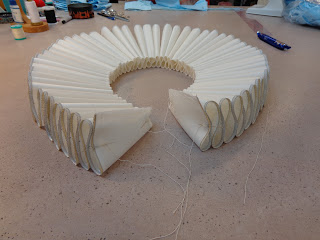 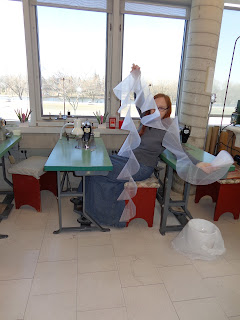 I have to say that it is difficult to get photos of the ruffs being made. I get something cut, then voila, it is being sewn together and I am cutting something else.

Here, I caught a quick photo of K- sewing together the Crin interlayer of the ruff.  This is the substance that will give the ruff structure. The Crin and the silk are cut exactly the same, there is a 1/4" seam allowance left on the inside and outside of the circles, that will get cut away as the edges are finished.
The Crin is seamed by overlapping the seam allowances and stitching through the layers, just to keep it as flat as possible. 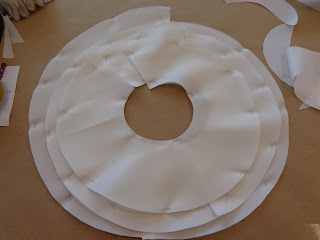 The silk layers are seamed together with a scant 1/4" seam allowance. The joins between the sections are carefully marked to prevent confusion. 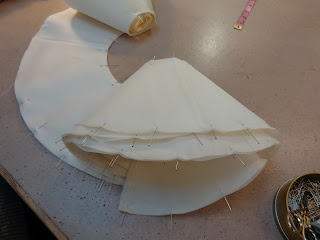 Once all three layers are seamed together, the task of sandwich making begins. I was careful to make sure all the sections had matched grain lines, so the circular aspect was maintained.
The three layers are pinned, then basted together by hand. You can see the basted section being rolled up as K bastes. It is very important to keep the length under control while you are working on it.
After they are prepped, K will overlock the outside edge with metallic thread, and satin zig stitch the inside curved edge which is what will be sewn to the neckband. The inside curve is zigged and cut away by hand. We tried numerous samples trying to overlock the inside edge, but it wasn't working very well, so zigging was the next obvious finish.

Ok, off to cut something else, actually another ruff, then a cape, and some sleeves and a waistband, a collar, as well as some pockets for a variety of items, and talk to boots and shoes about sword belts ....well, you get the picture- it is busy!

One of the things on our to do list is making a large figure eight ruff.
It has been a few years since we made one, but luckily Susy had kept samples from the last time as well as notes that she took during a mini course with a colleague. We actually have three figure eight ruffs to make, all slightly different, from black linen with a piped edge to this large graduated one.

This particular ruff was requested to be made specifically to these dimensions. The size at the neckband should be 2.5cm. The size on the outer edge (the figure eights) should be 7cm. The depth at the front should be 4 inches and gradually increase to a depth of 5 1/2 inches at the centre back. 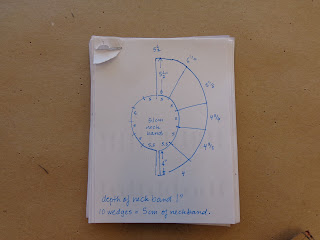 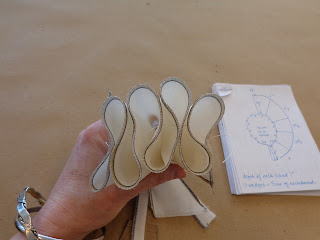 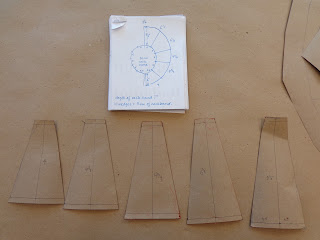 The edge was to be baby locked in metallic thread.
The fabric is a satin weave silk organza. For structure, Susy made a sample with  an inner structure of heavy nylon crin. Odette 611 from Fucotex to be specific.

So I divided the neckline into sections and determined the depth of each section. I made five different "wedges" to correspond with those depths. I then figured out how many wedges would be needed to fit into each section of the neckband and drew them out as partial circles.
Once that was done, I taped the sections together and modified the outer edge so the 4 inch wedge section would blend into the  4 3/8" wedge section gradually, all the way to the 5 1/2" section. In other words when it was all taped together it was a spiral.
So far so good. Triple check everything. Once you start there is no going back.
Well there is, but it is messy, disheartening and time consuming. So I walked it through with the team, asked them to ponder anything I might have missed while I went to lunch before I started cutting out all the layers.
First- cut all the structure fabric, which is stiched together into a spiral. Then cut all the fashion fabric- double- a layer for the top and one for the underlayer. They will all be stitched together,  into spirals, before they are all sandwiched together.
Pictures to come.