Here we are at the end of week 20 and I have fallen behind in my posting. 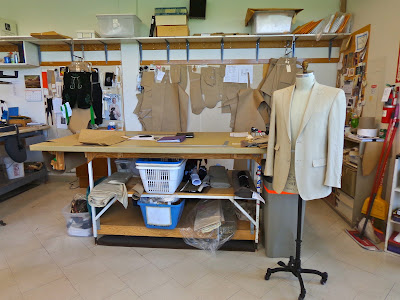 Well the table still looks tidy in week 19. The sample modern suit is still hanging around, and I have someone working on the one I cut, getting ready for a fitting. We were just finishing up our understudy costumes, so many fittings were still happening. Sometimes another actor is just the right size to wear someone else's costume, and that saves us time and money when that happens. Occasionally the understudy is no where near the same size as the original actor, but luckily we have 60 + years of stock costumes to find something appropriate. On the rare occasion that nothing fits and nothing is found to be appropriate, we build an understudy costume.  I have been lucky so far this season and nothing has to be built from scratch for the understudy.


That being said, we were still working on the Naval uniform which is the actual costume that will be worn in the show. The actor has a stand in uniform that will do for pre-views until we can sub in the new one.
Here it is in process. 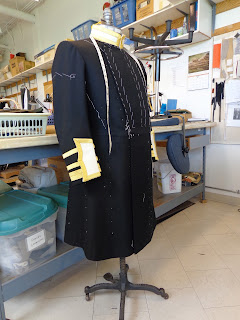 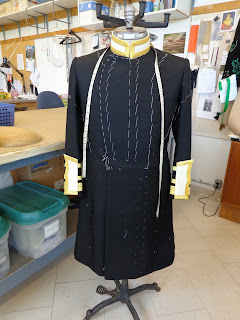 I don't think I got a final photo of this one, so I will have it sent back next week to do so. I was trying to take some pictures of the patterns as well, so in the fall I may have a bit of a pattern show and tell. 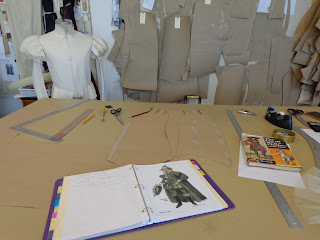 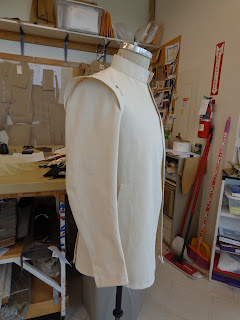 I confess I feel a bit battered by bouncing back and forth between the centuries sometimes.
I had the 19 century going on with the Naval coat, still doing fittings and notes on the 18th century show, plus I have a modern mid 20th century suit to make and now the mid 17th century plus an Elizabethan show to start next week.

Enough for now, it has been an intense few months of work and a few more months are coming before I will be taking a well deserved break- of course that means I will be unemployed!
such is the life I lead.
Take care, and  enjoy your days off when you get them.