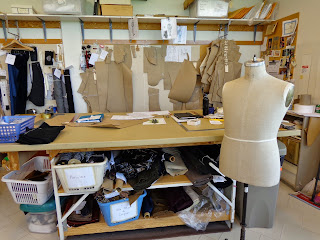 Well that was a crazy couple of weeks! Those coats that were lined up in front of the table have finally  gone to their place in the dressing rooms. Even the cape that was standing sentinel for weeks made it to the dress rehearsal. It had a bit of basting left in it and needs some finishing, but it was wearable. I even had time to clear up some of the mess and I have found my table top again!
Friday was particularly hectic as I had three fittings, a quick change rehearsal at another location, and a tech dress in the afternoon. After the rehearsal we went out for a well deserved beer and some food, then home where I immediately sat down and fell asleep.
I think everything went well apart from a pair of breeches in a horrible ultra/fake suede. I don't know if you have ever fought with a fabric but I sure did with that one. I think we will be making a replacement pair  this week!
in case you were wondering, this ultra/fake suede is likely upholstery quality- it has absolutely no give, it is extremely bouncy and resistant along the weft, so much that you cannot gather it- it just fights you- yet along the warp it will fold completely flat. If it is cut as you normally would, it looks like you are wearing a barrel, and cut the other way, well, lets just say that the seat of the breeches was odd looking! It also has horrible static cling, so the legs kind of clung to the actor in odd ways. Not good.
Note to self- just plead for real leather or suede! 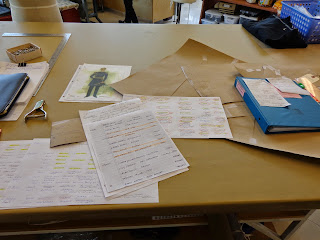 Here was my table on Thursday- I was trying to organize some paperwork and also to draft up a pattern for that Naval frock coat you can see in the sketch.
It is a tale of woe, and a mistaken belief in Internet purchasing to solve budget crunches that leads me to be drafting again for our 19th century show.

Beware you who think that you can order quality costumes off the Internet to save money.
Give your head a shake too if you think that anyone will even look at the measurements you send even though you think you are getting a "custom-made" product.
The "thing" that arrived (on the day we were onstage) was so bizarre that I couldn't believe what I was seeing. It wasn't just the fact that it did not fit the actor, nor had any proper shaping, or proportions that related to the human body, and it was not a full skirted frock coat but a weird tailcoat like thing.  The skirt was a strange one piece apron of fabric, bagged out with coarse cotton duck as a lining with no centre back vent opening, no relation to anything that it should be.
We dubbed it the "manatee" perhaps because it reminded me somewhat of Tenniel's drawing of the walrus from Through the Looking Glass by Lewis Carroll.

Suffice to say that I am making one now.

That is for tomorrow though.