We also use this technique for military tunic collars that need substantial interfacing, or any other time when you need a stiff interfacing but don't want that interfacing to go into the seam allowances. 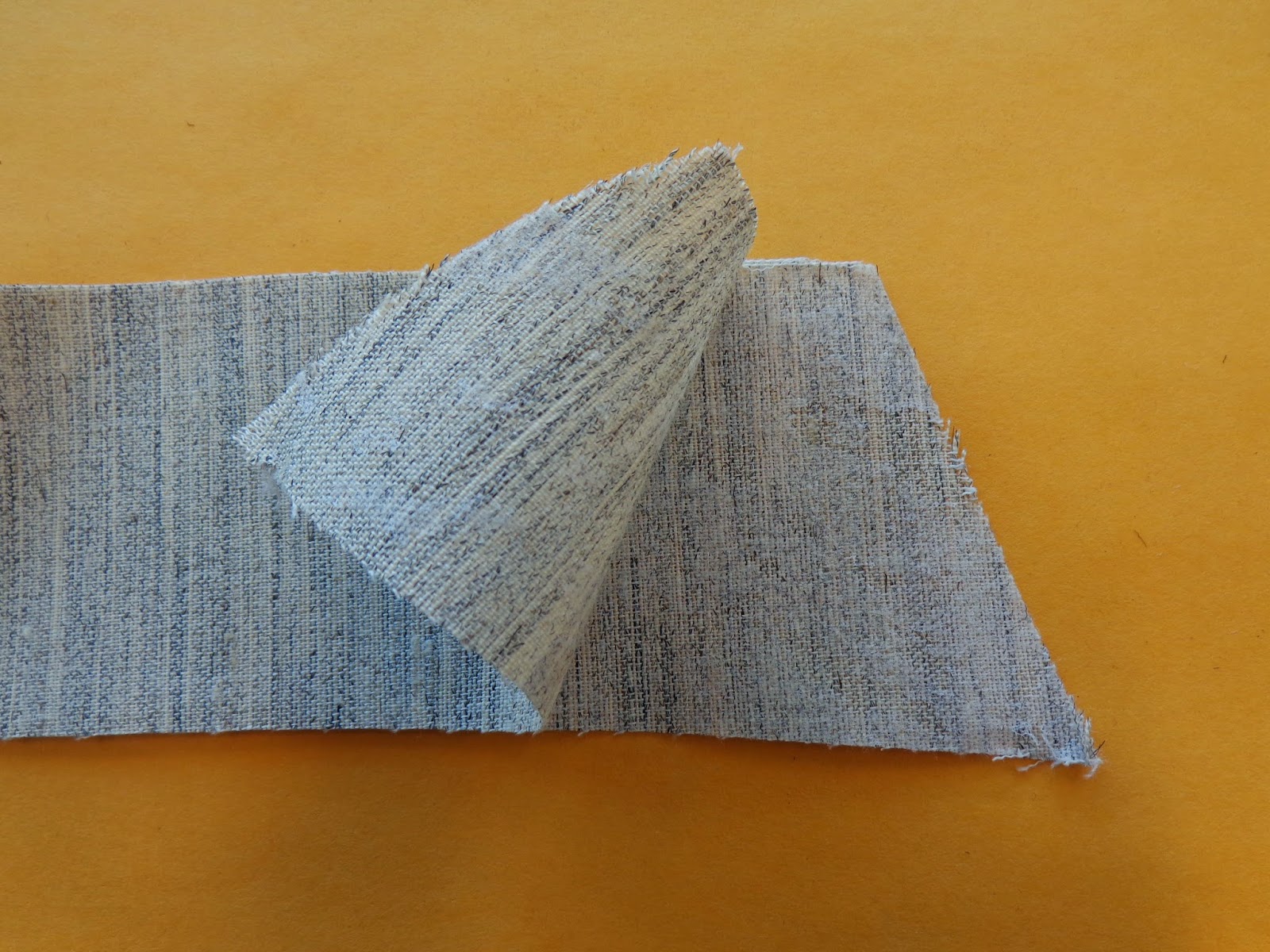 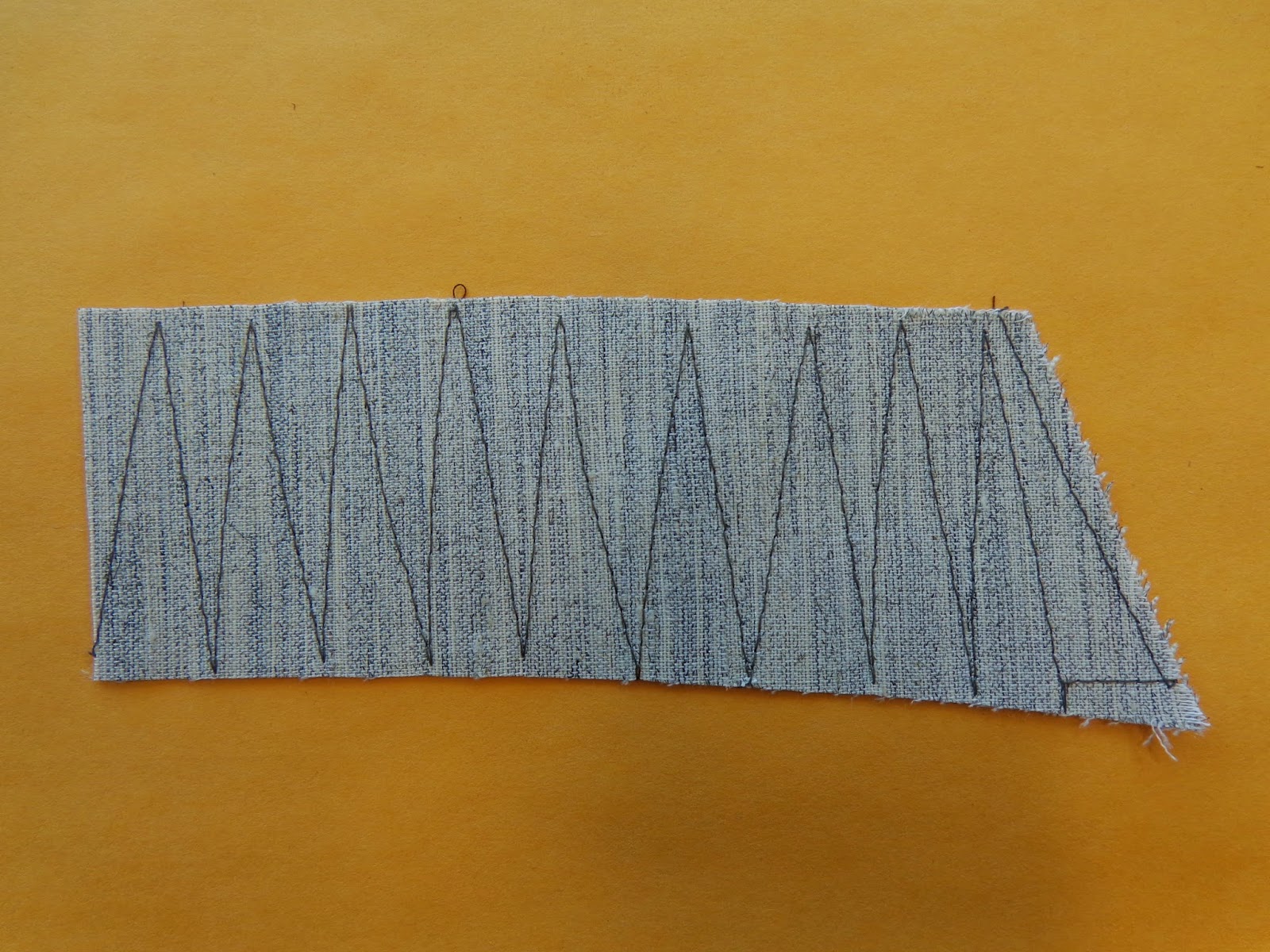 I thought this would be a good tutorial, but only after we got through most of the process, so these first photos are just samples.

First, you need to determine what the structure of the waistband will be. In this case I used two layers of hymo fused together with stitch witch fusible web. Then I stitched through the layers so they would not ever delaminate. Essential for long term use!

Prep, then cut the waistband (or collar) interfacing to the finished size. 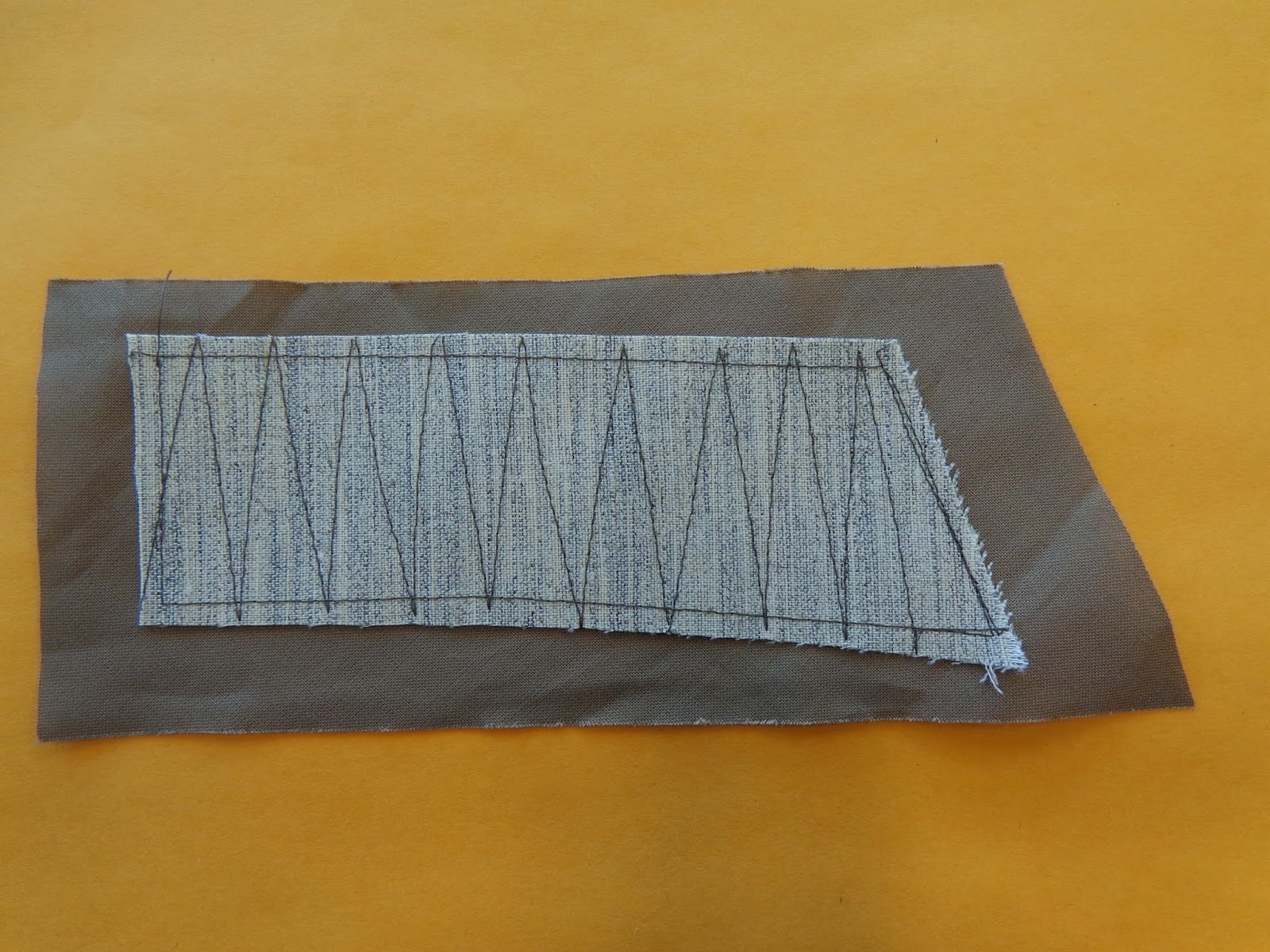 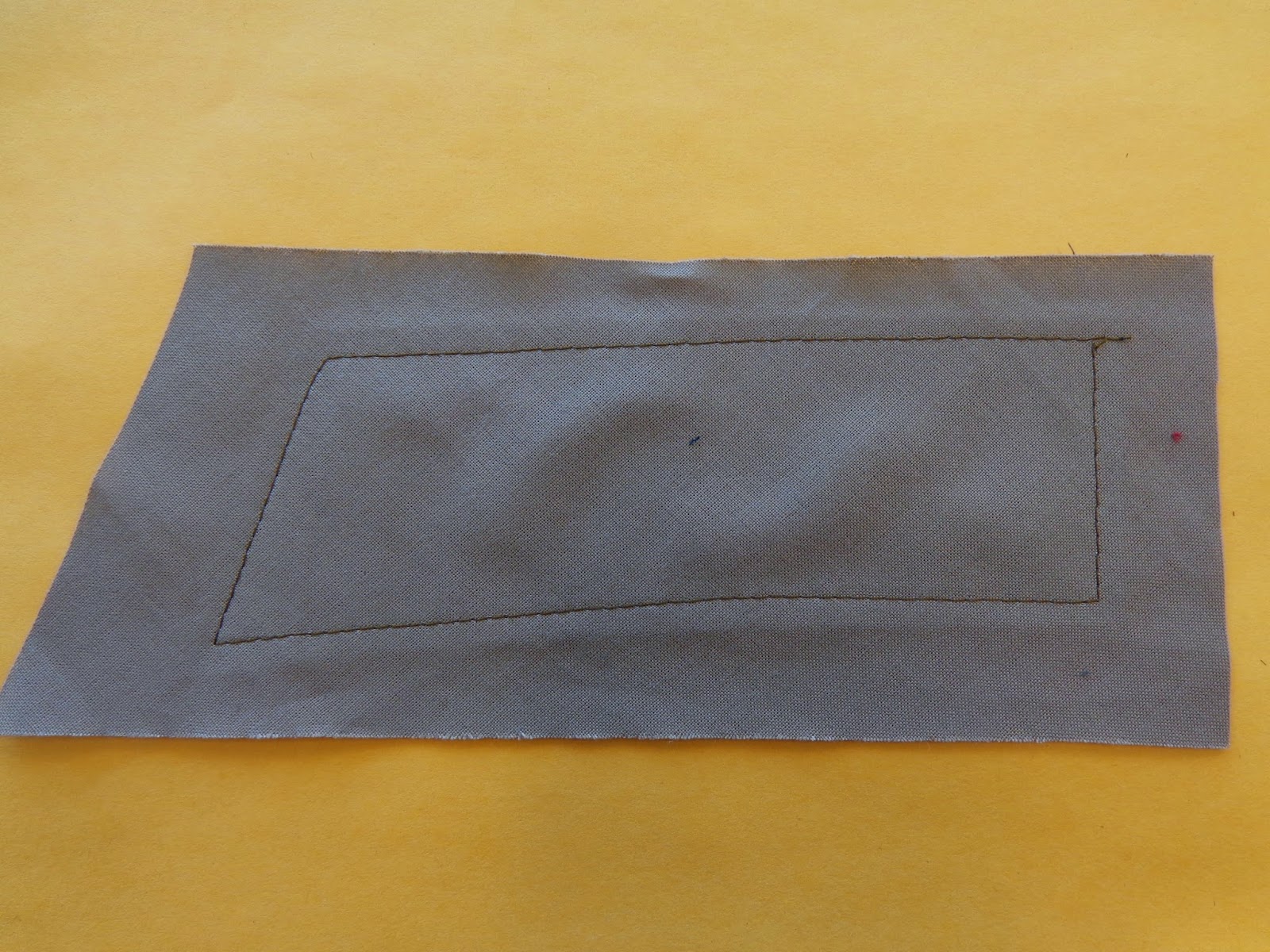 Cut a layer of cotton silesia on the bias. This should be bigger than the waistband interfacing. Stitch it to the waistband interfacing. Make sure it is on the side that faces outwards, so your fashion fabric will sit against it. (this cushions and protects the flimsy fabric from the roughness of the hymo. Trim the silesia so you have 1/2" extending beyond the interfacing on all sides.
With a military collar in wool you would attach the cotton to the inside, allowing the fibres from the hymo to "grab" the wool and then the cotton on the inside gives you something to cross stitch to later. 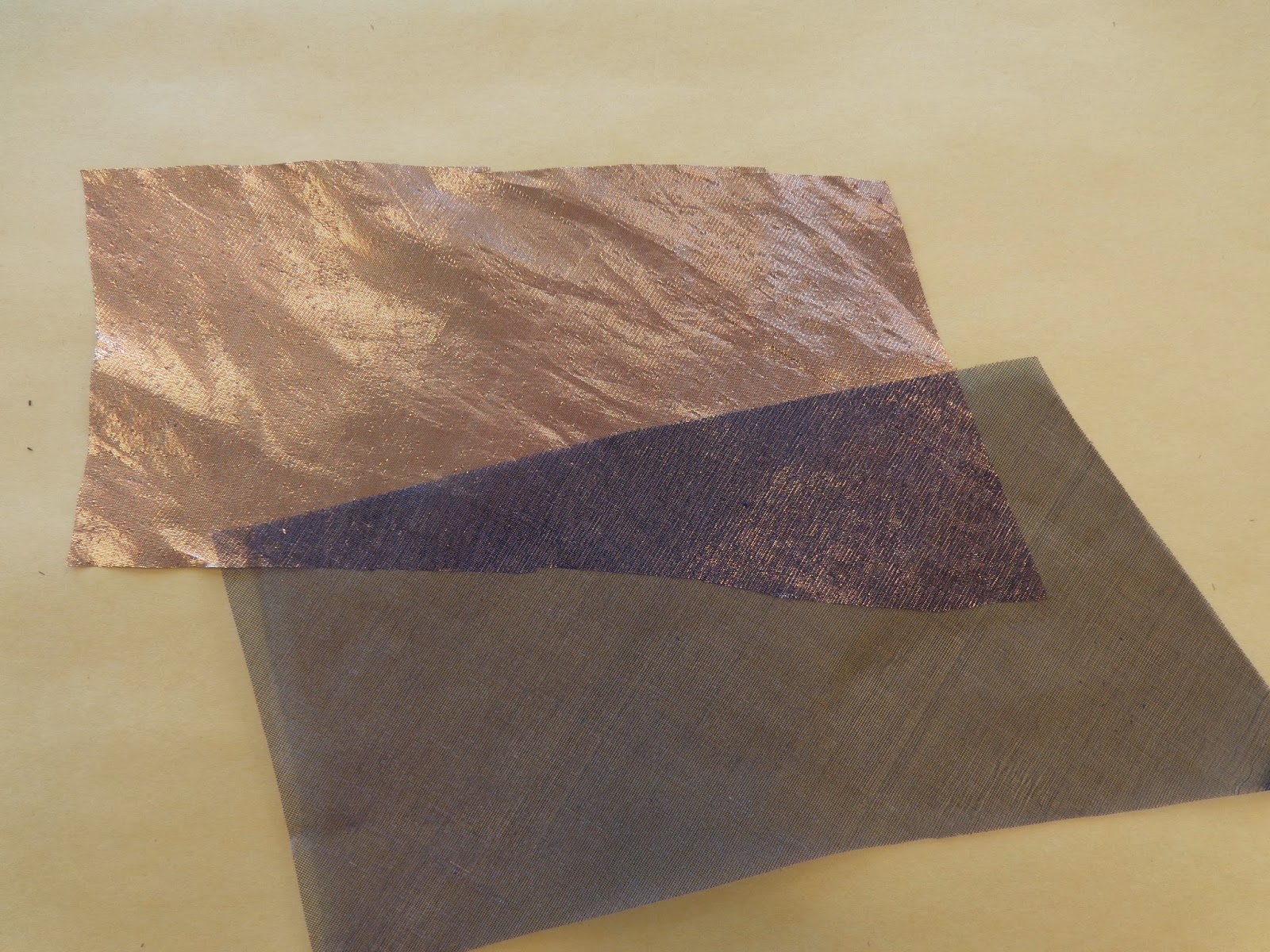 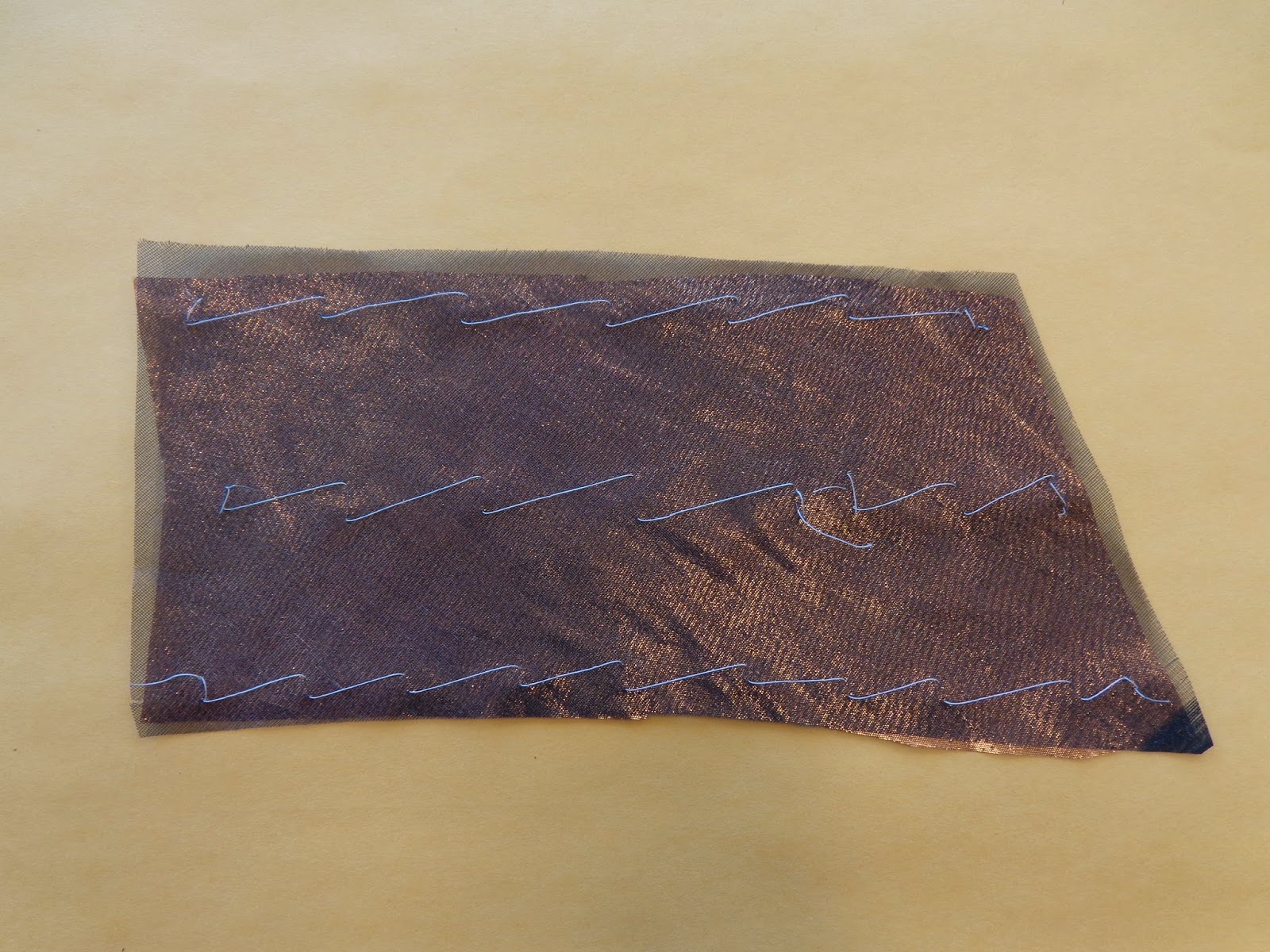 Rough cut a layer each of lame´and organza on the bias, big enough to allow seam allowances on all sides. Don't worry about being precise here. Slightly bigger is better. Oh and if you are working with lame´, press it first because it shrinks!
Baste the organza over the lame´ by hand. Once down the middle and along each edge as well.

Lay the lame´ and organza over the interfacing layer, and baste in place. Since I was using the lame´on the bias I didn't have to ease it on, but if you are making a collar, and your outer fabric is on grain, you should baste it in place over your hand or on a convex surface. If you baste it flat on the table then try to curve it around a neck, the outer fabric will be short and will forever try to return to being flat, pulling and distorting the collar. You will regret that collar! 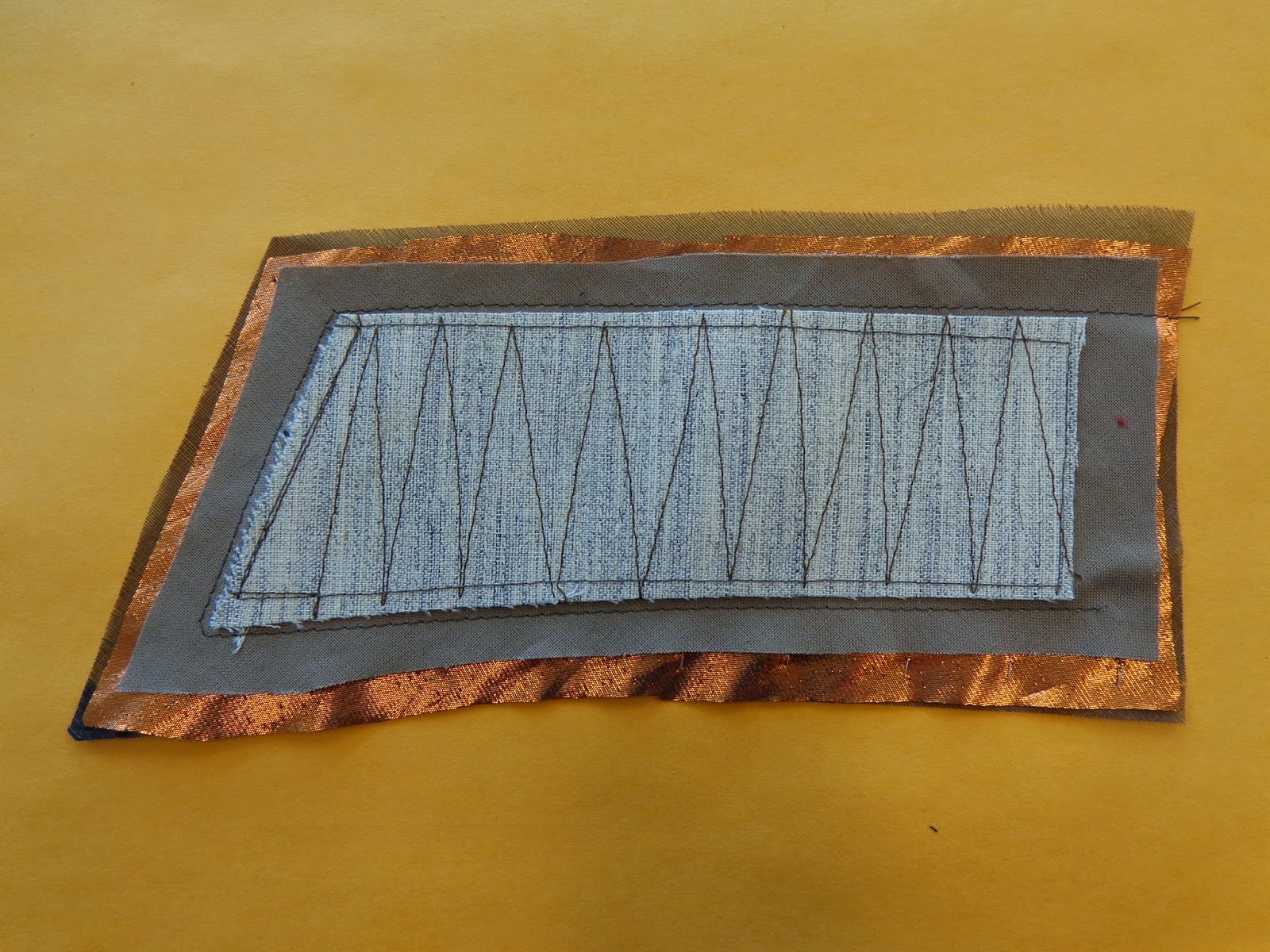 Go to the machine and stitch around the interfacing, not right up against it, but a few millimeters or 1/8" away.  You want to be able to leave this stitching in forever.
Stitch through the silesia and the outer fabric only.

Cut a layer of silesia or lining to finish the inside of the waistband. Cut this on the straight grain- the same grain as the interfacing. 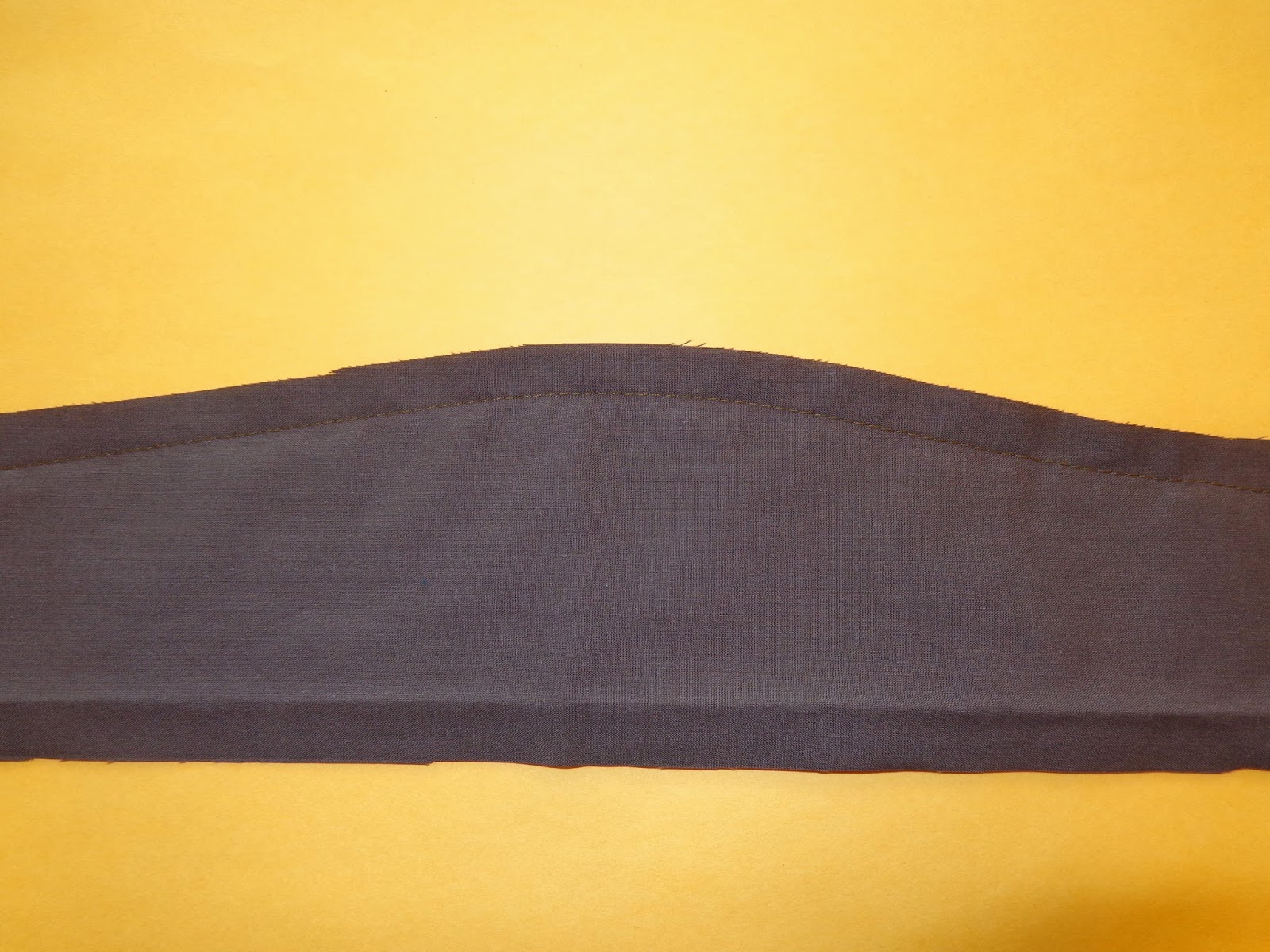 Put the lining and the interfaced piece right sides together and bag out the upper edge of the waistband. 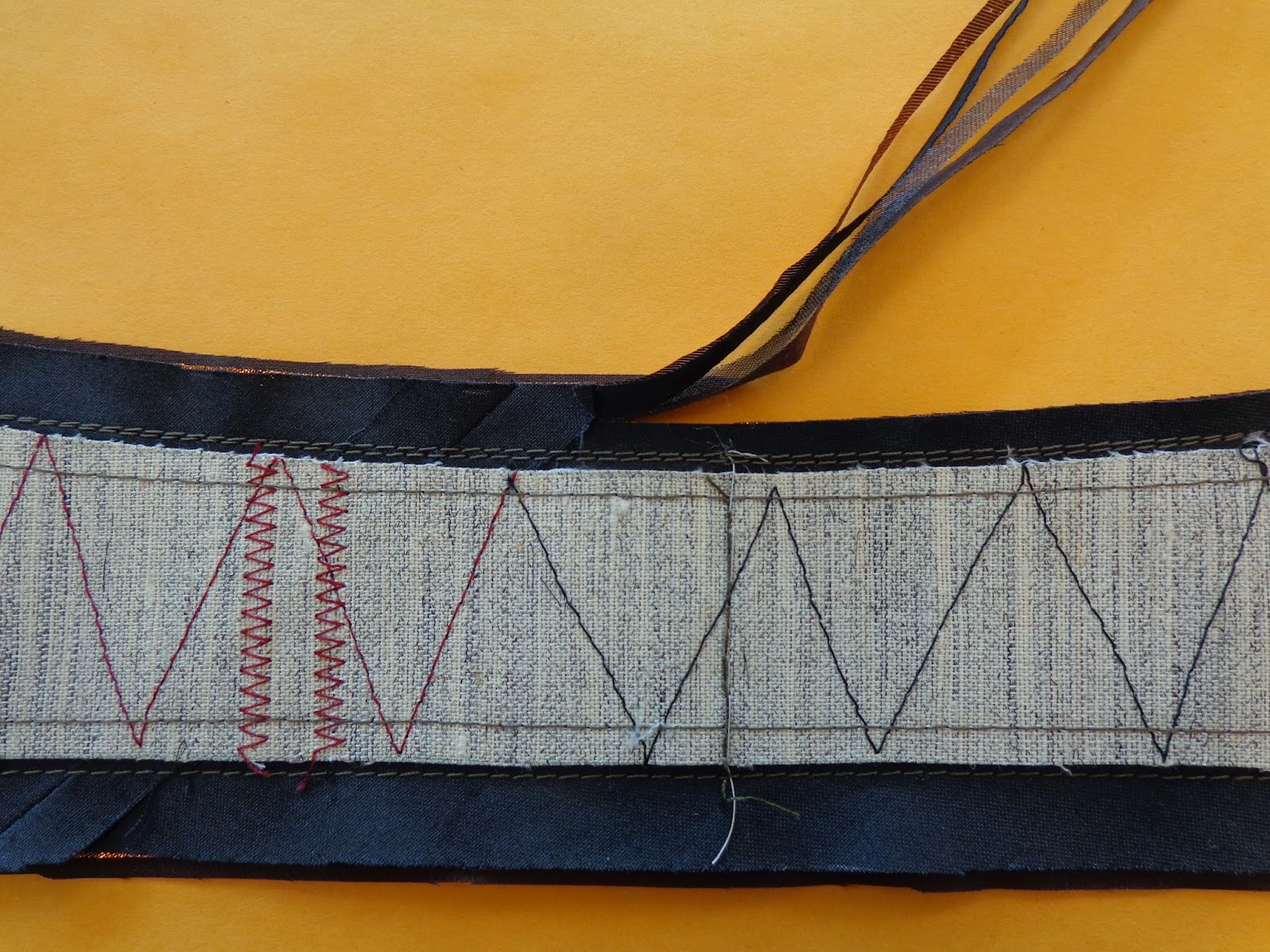 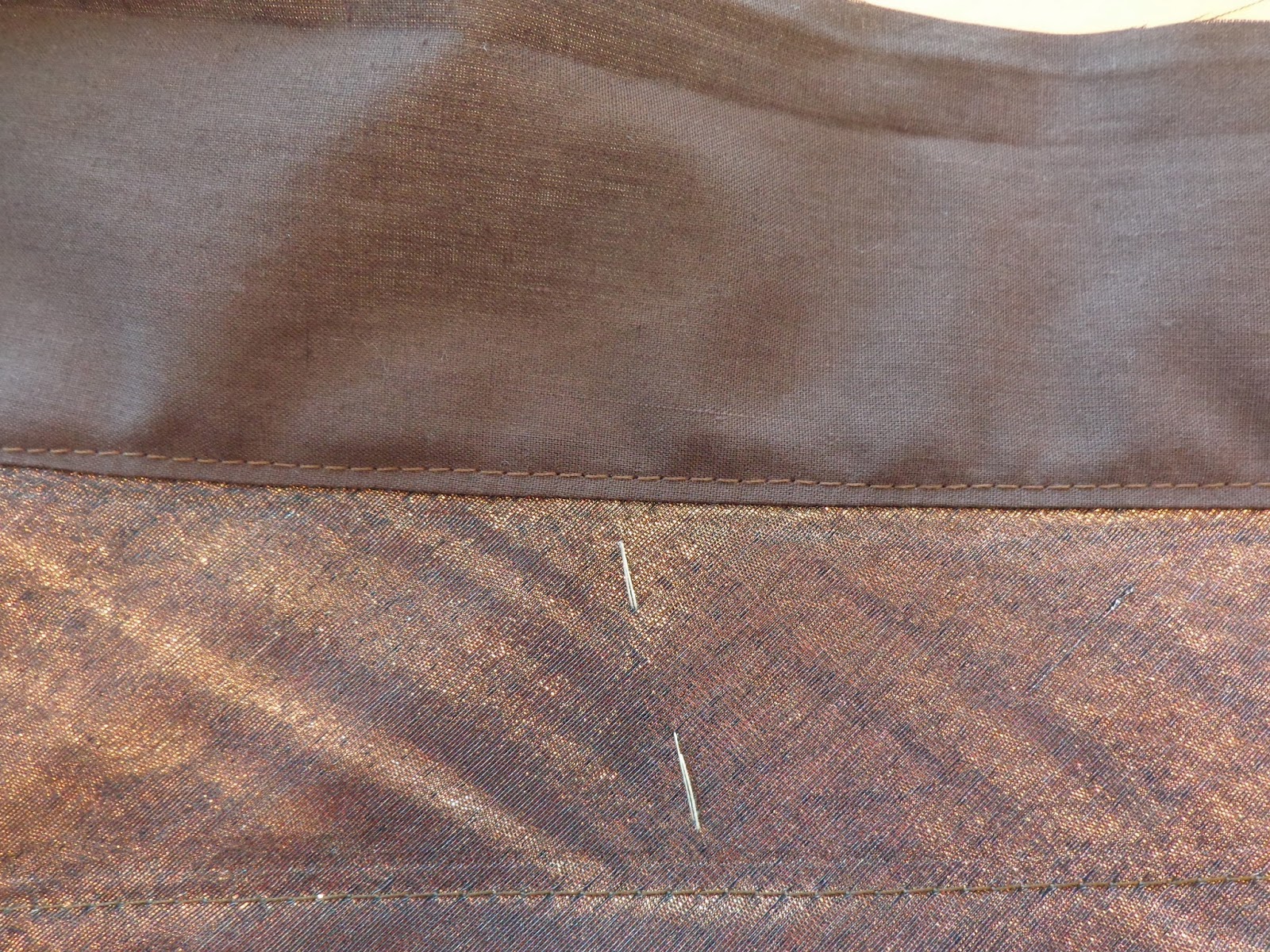 Press and trim the seam allowances and then under stitch, turning the lining to the inside of the waistband. 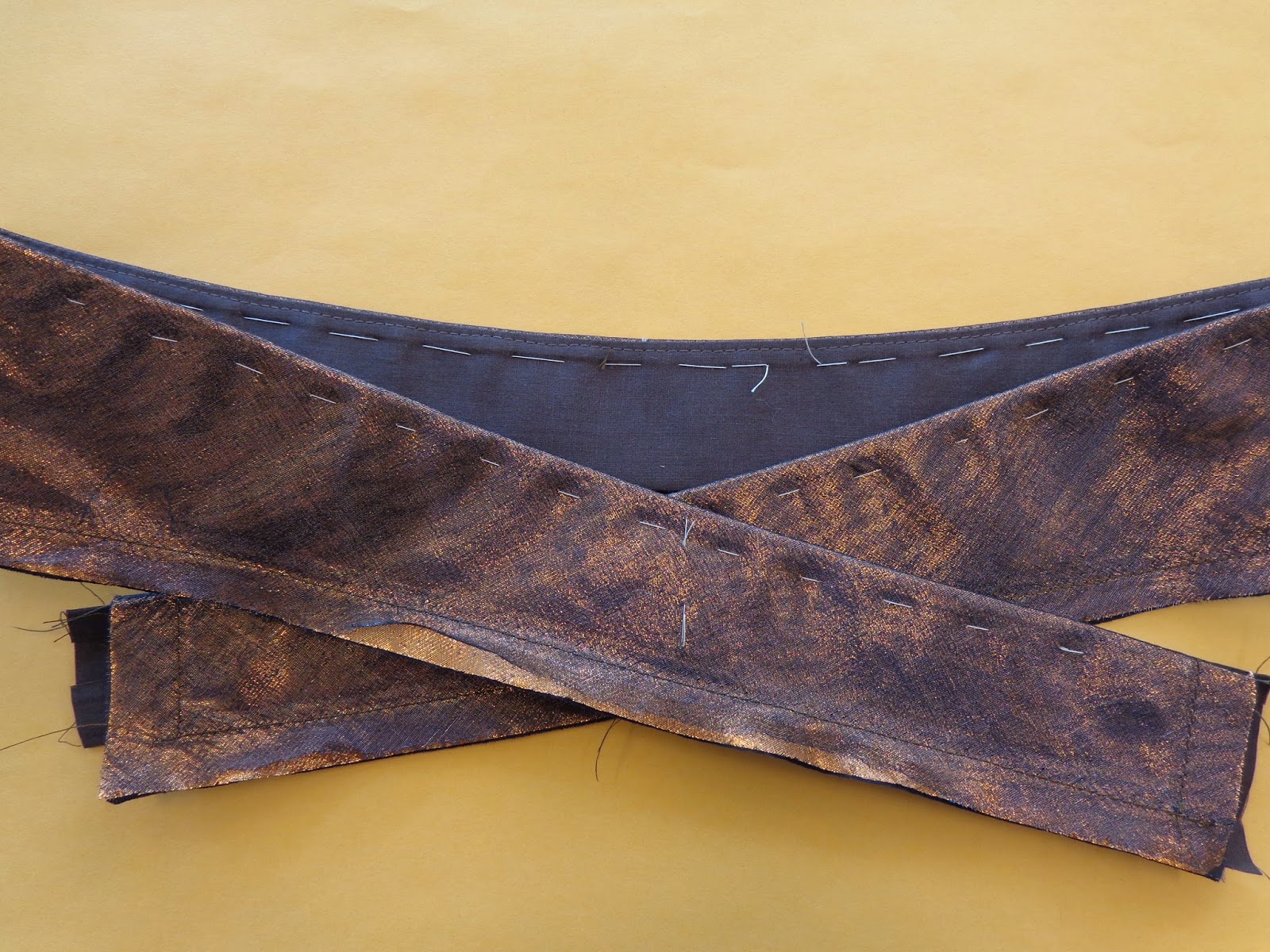 Baste the lining to the inside by hand.

I like to leave the ends open and finish them by hand.

Now you have a waistband unit that you can sew to the waist of the shendyt.

Sew it on, do not catch the silesia/lining in your seam. Trim the seam allowances, and cross stitch them up to the inside of the waistband if desired.

Finish the ends by hand, and slip stitch the lining in place along the waistline.

Install the closures. In this case a press in hook and bar at the CF, and sewn on snaps on the over and under lap ends of the waistband. Since the ends of the waistband cross over at an angle,  onto the body of the shendyt, we used a small square of twill tape for support under the snaps.

Did I take a picture of the finished shendyt?  No, I didn't.
Why? I don't know.
It has been a crazy season and my wits are at their end. I will show you the clever loincloth inside the shendyt later. I took pictures of that.
Now for a week off,  maybe go to the beach, maybe read a book. I will return then.
Posted by Terri at 10:53 PM 3 comments: