Well, I think I can let you know about my last project since it has now been seen in public.

Margaret (who cuts women's wear) and I just finished costumes for Canadian ice dancers Kaitlyn Weaver and Andrew Poje who are starting out their competition season this week  at the US Figure Skating Classic in Salt Lake City, Utah.

Whew! it looked like there were no costume malfunctions- hurray- since that results in points deducted!
We made two costumes for them, a "rehearsal look", with Kaitlyn in a thirties style playsuit, and the finale look which is what you can see in the video I am linking to here.
I made Andrew a pair of french blue high waisted trousers worn with a striped shirt for the rehearsal look and a black with blue striped trousers and waistcoat, with a white pinstripe shirt for the finale look.
It was very nerve wracking getting all of it together in such a short time frame and with basic/sketchy measurements and only one fitting.
Adding to the pressure was the fact that the clothes have to not only look good, but must also fulfill a level of functionality that most clothing doesn't. He needs to be able to skate in them and do whatever the choreography requires, without any problems. I felt a weight lift off my shoulders as I watched both the practice routine and the finale and everything was fine. It always feels like flying by the seat of your pants when you take on projects like this. Yikes!

It seems like only yesterday that I was making opening ceremony costumes for the 2010 Olympics, and now my Olympic connection may continue as I wish Kaitlyn and Andrew all the best in their quest towards Sochi 2014.
I think we may have another project in the works for them.
Costumes designed by Debra Hanson. 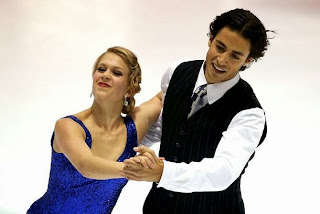