These are the reason I haven't written much lately. Very busy at work getting these ready! 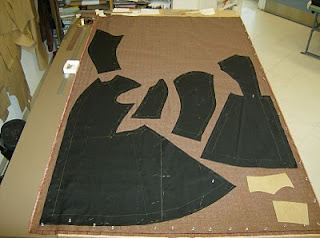 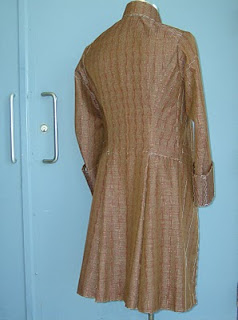 The design for these is late eighteenth century- 1780-90 or so , but we aren't slavishly following any specific date/style reference. It is more important to achieve the "feel" of the character that the designer is after.
Each of these coats needed different types of support for the fabric. The fabric of the red coat above was as limp as a dishrag, so I decided to flat mount it on a sew-in interfacing called "Sew-sure". It comes in different weights, and I chose the lighter weight one for this.
I try not to fuse fabric because they can look like cardboard and then over the course of time, wear and cleaning the fusible can "de-fuse" and the result is nasty.
We started to sew in the interfacing on a panel, flat mounting it carefully by hand, but the fabric was not co-operating. Not at all. It was very irritating and I needed it ready for a fitting quickly, so I changed tactics, got a bolt of tricot fusible and fused the darn thing. It is still very soft, but workable and we went forward from there. Sometimes you just have to go with it, but I am not admitting defeat.......
In the past I have cut the canvas front of hymo from scratch, but this time, I tried using a lightweight pre-made overcoat chest canvas. I was a bit doubtful at first, but it has worked quite well, and has the benefit of being less expensive in both time and materials. The overcoat chest canvas was about $20.00 whereas hymo by the yard runs about the same price. 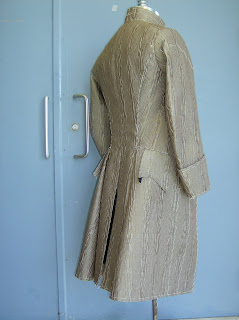 This coat fabric had a nice bit of body to it- a little bit of the sew-sure heavy or extra heavy interfacing went in the skirts from the waist down. That interfacing is crisp but light and doesn't seem to lose it's hand over time so it doesn't add much weight while it holds the skirts out. I used the overcoat chest canvas in this one too. 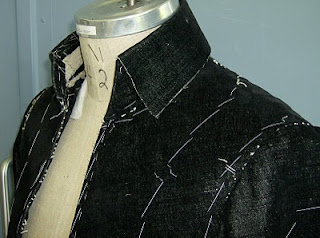 The last coat is this velvet - It feels like a cross between a cotton velveteen and a silk velvet. The skirts are interfaced in the same way as the other coats but the overall feel is a bit in between the other two. 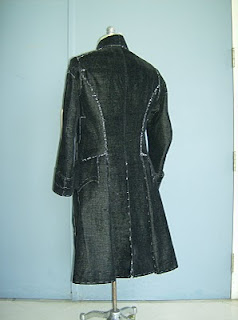 They are all just basted up ready to be fit with their respective waistcoats and fall front breeches. After the fittings we'll take them apart at the shoulders to make it easier to work on them, figure out the trim detailing and get to work putting them back together again.
Posted by Terri at 8:46 PM