hurry up and wait 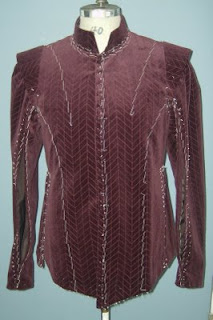 Well, it's hurry up and wait now. Everything for this show that I can cut out has been cut and I need fittings. I did some research and started working on some 1960's suits but since they are still in the making the pattern stage, I thought a picture of this doublet that is basted together and ready to fit would be nice to see.
The velveteen has a stitched pattern in the fabric which gives it a bit of textural interest. I'm sure that it will get trim, so it's a shell for now, until those decisions are made.
The sleeves will have buttons and buttonholes all up the forearm seam. The collar looks a little wonky right now, but there's a lot of seam allowance and stuff that will get trimmed away once we fit it.

This Wednesday, we did a web cast taping that included this velveteen doublet. I thought it would be up now but maybe they are still editing?
It's always interesting doing the web cast taping- it's like being in the hot seat. You never know what you will be asked!
At least it's not live.

A postscript: if you didn't get a chance to see the film of the production of Caesar and Cleopatra at a Cineplex this week, I believe that it will be airing on Bravo on April 4. It's worth seeing.
I think we did a good job with Mr.P's costumes- how we got it done was quite a journey and a story for later.
Posted by Terri at 7:08 PM