Okay, we are heading off into other territory here, definitely away from tailoring, although I do have some nice 1930's and '40"s suits to make this season. More about those later. 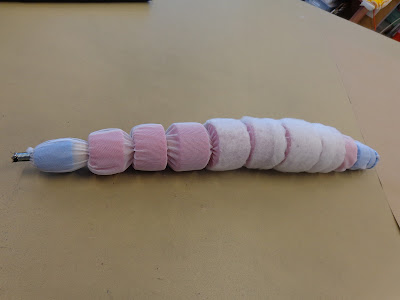 So what the heck is this on my table?
Any guesses?
Well it is going to be a wolf's tail. Yes indeed.
Many years ago I worked on a production of Wind in the Willows at The Grand Theatre.
If you know the story, it has animal characters and they are often charmingly portrayed as animals with human characteristics, wearing Lovely Edwardian clothing. It was a fabulous production, the actors included Douglas Campbell as Badger, and, well, if you know who he was then you can imagine his presence in that role.
The costuming was properly Edwardian and the characters had tails which emerged from their velvet breeches or wool trousers.
The tails were made by a very talented woman, Elaine Ball, and I was recently asking her about how she made them (as I could only remember snippets of something we did almost 20 years ago-wow).
Strangely enough, she was in the midst of teaching this very thing to a class of costumers.
She graciously shared some photos that jogged the old memory. I shared these with Kim my colleague who made the prototype as well as the structure above.

So, the tails are made of pool noodles, shaped and tapered a bit as you can see, and each pool noodle segment is separated by a large wooden bead.
The base of the tail uses a door spring, that feeds through the first few sections, as well as a heavy elastic shock cord which goes through to the end section.
We will construct a snug fitting basque for the actor to wear, and it will have an attachment plate at the back for the tail. The tail here still needs an attachment at the end of the spring-but the spring allows the tail to sit flush against the basque and hang quite naturally.

This tail has had a mesh fabric applied over the segments in preparation for covering it with fake fur.

I hope I will get to that task next week, cutting out fur sections as well as making the basque and getting the whole thing together, including another unitard that is worn with this. Oh and there's armour too.

I will also post about the suits as I have a couple of challenging figures to make for and they all need to look the same. Interesting challenges this season for sure.