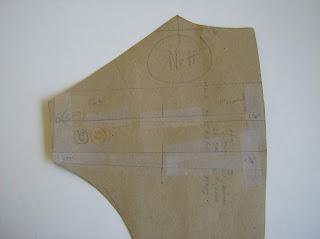 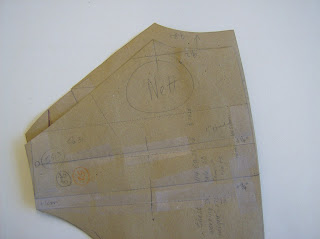 In response to Heidi's comment, I am posting the changes I made to the pattern for a stooped back.
In the top picture is my initial draft where I opened up the centre back a full 2.5cm (1inch) as well as adding 1cm at the armhole. This was the pattern I used for my toile in muslin.
The lower photo shows the original pattern laid on top of the adjusted pattern after the toile fitting. I have added more length in the back right across the pattern as well as some extra on the CB line.
I don't think I laid them out for the photograph as well as I could have. I wanted this for my own records in case I have to make something else for this gentleman. Next time I will try to get a photo of the whole back to show all the changes. For instance, I had to adjust below the waist for a flat seat so there were many small adjustments at the fitting, that may not be reflected in how I lay this out for the picture. I didn't take photos of the pattern fronts, although I did keep the pattern for future reference.

Nett on the patterns means no seam allowance. I will often remove the seam allowances when drafting a figure like this, as I find it easier to lay the pattern pieces seam to seam to check the seam lengths and to make style line adjustments.
It was a challenging figure to deal with. I wish I had more time to finesse things, but we are pushed for time and I had only a toile fitting, then one fitting for each outfit as a baste up in fabric, and I don't think there was time for another after that. It is a bit nerve wracking at times. I did pad up a stand after the toile fitting, to reflect the changes we made, so that helped quite a bit in the process.