Lela and I have spent the last few days drafting up waistcoats from a selection of drafts from a variety of sources, and time periods.
I thought it would be a good introduction to the different ways that pattern sytems work on the body and how the fit and styles change over time.
At this point it is all about making patterns and checking them with a half muslin before we actually pick a style and make a toile for one of our fitting volunteers.
The end result is to be able to develop your own framework and understanding of drafting rather than following one specific draft for all your needs.
As you can imagine, in the theatre we may be called upon to create the look of any period, so you don't want to be locked into a 1950's draft for everything nor do you want to be locked in to an Edwardian period draft and try to make it work for a 1950's look. It is important though, especially when learning, to draft them up and see if and how they work. We need to be able to go into a first fitting knowing what to expect from our pattern.
We also have to make allowances for the fact that fabric manipulation was very important and built into the drafting systems in the past, but we cannot be guaranteed a nice wool to work with, so we must be prepared to adapt the pattern rather than the fabric. 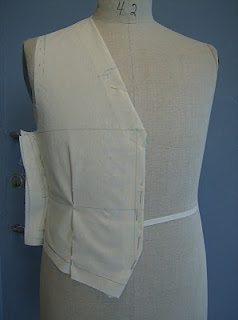 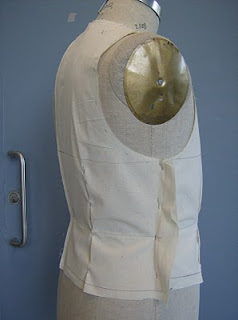 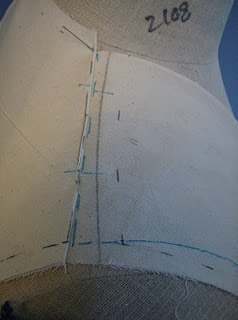 In these photos you can see the results of a half muslin drafted for a standard size (108cm chest) using the "Metric Pattern Cutting for Menswear" draft.
Now this is obviously a metrification of typical British drafting of the mid to late 20th century.
I have a few issues with this draft as it is written- generally in regards to the ease in the body (draft 5cm in but lose almost 4cm to seam allowance and shaping makes it too tight) and the fact that on a stand at least, the balance is short- in other words the fronts were pulling or tipping up. I recommend marking in a horizontal line to indicate a line of plaid to check for distortion. In the shoulder photo you can see how much I have dropped the fronts in order to get the waistcoat to sit more level. I don't think that this could have been accomodated by ironwork of the fabric.
Hmm......... what else? The neckline seems quite wide and it is almost as if they took away the traditional back neck strap of wool and just left the neckline as it would have been without. There is a large amount of waist suppresion on the side seams, which I would reduce slightly. The shape of the front panel is quite blocky and broad which could just be style but I also didn't like the angle formed at the shoulder seam at the armhole. I don't know about you but I like style lines to have a nice continous flow especially over seam joins, so I'd fix that.
I don't use this draft and I was surprised by some of these things especially since this is supposed to be used as an industry textbook to develop patterns for manufacturing. It is also the third edition so either no-one else finds the same issues (or is bothered by them) or no-one has bothered to make corrections in between editions.
The next one I'll show you is from "The Blue Book of Men's Tailoring" c 1907 .
Posted by Terri at 9:37 PM