all in a day's work 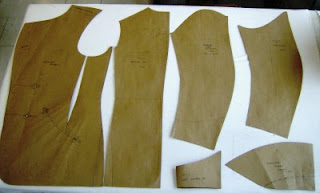 This is what I did on Thursday last week.
I came in early and talked through alterations that one of the sewers was going to do on a contract job she had.
I connected with two of the three design assistants I am working with, touched base, confirmed when the designers were coming, what fabrics were being ordered, where everything was at.
I called 8 fittings for actors in all three shows for next week.
On my coffee break, I repaired the covers of one of my drafting books that had come apart. I admired the great job that one of my sewers did designing and pattern making, cutting and sewing the costumes for an aerial dance piece that was showcased last week in Whistler B.C. in preparation for next year's Winter Olympics (she did it all herself!)
I went through the trim placement and how to proceed on a doublet with a couple of sewers, conferred with a sewer regarding a jacket we're making for another team
and
I drafted patterns for a smoking jacket, waistcoat, and trousers, cut mock-ups for all three pieces(since I don't have any "real" fabric yet), and gave them to one of the other sewers to put together.
I did find an old draft for a smoking jacket, which was fun to look at but that was all I did with it. I like to see what general shape the patterns were- the characteristics of the period pattern; the position of the 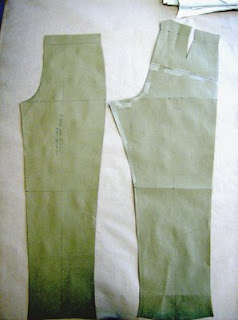 shoulder seam, underarm dart, how straight or shapely the back is, and then do my own thing from there.

Took these photos and went home, drove my lovely daughter to ballet, made dinner, blogged, then baked brownies for my daughter's fundraising efforts for school.